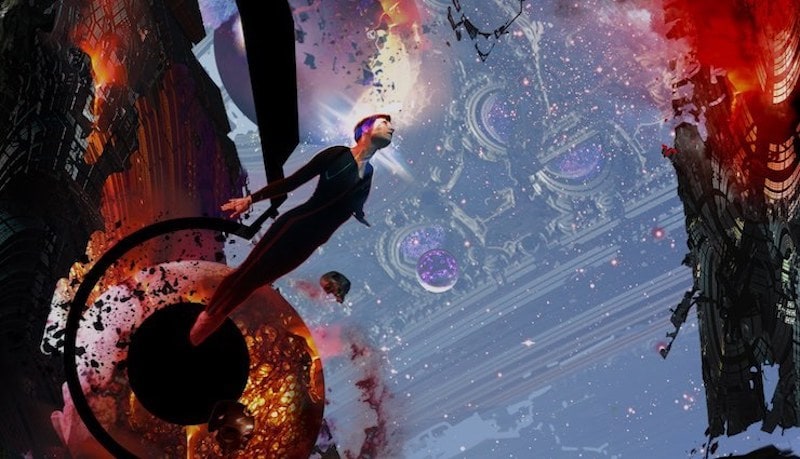 The language barrier that divides China from the English-speaking world also has hidden some the greatest science fiction writing from the rest of us. Cixin Liu's Remembrance of Earth's Past trilogy is one of these gems. Now that the series has been translated to English, the rest of the world can enjoy it as well. The books in the trilogy are called The Three-body Problem, The Dark Forest, and Death's End. The English version of Death's End (translated by Ken Liu) was published towards the end of last month and it's well worth a read.

The one distinguishing characteristic of the Remembrance of the Earth's Past trilogy is its scope. The Three-body Problem starts on Earth where humanity is grappling with first contact, while The Dark Forest tackles some of the problems of deep space adventures, highlighting the challenges humans face in reaching even the nearest stars. Death's End has the entire universe as its playground. Imagine millions of stars in just one galaxy, and increase that exponentially across galaxies in the universe. The scope of Death's End is that vast.

This can lead to some exceedingly dense passages and chapters that will be hard to follow for some people. However, if you've read hard science fiction (a category of science fiction characterised by an emphasis on scientific accuracy or technical detail) before - such as Poul Anderson's Tau Zero, or Arthur C. Clarke's Rendezvous With Rama, among others - then you shouldn't have much of a problem reading Death's End.

As fans of space opera, we love theories about the existence of intelligent life forms in the universe and of the beginning and end of the universe, so it is no surprise that we loved Death's End. The characters in the book are quite insignificant and as they discuss the events of the universe, they tend to feel sad and insignificant. In the grand scheme of things where much more powerful intelligent life forms battle each other, the human race can only observe and try to survive.

As a result, a large part of the narrative reads like commentary on society. When beings that can destroy the entire solar system remotely start to threaten your existence, you're bound to panic. Death's End takes you through humanity's struggle for survival and how every false alarm almost leads to disaster. It also does well to highlight the weaknesses of humankind. On a galactic scale, human technology and civilisation have the maturity of an adolescent, as the book itself says.

That's not to say that there is no hope for survival. It's what keeps humans going in the trilogy. However there are plenty of examples of characters and society making extremely irrational and borderline suicidal decisions. That might be frustrating but you'd do well to remember that in the real world, humanity has probably never achieved global unity and even in democratic nations there is a bit too much of infighting that holds back progress.

Cixin Liu has a lot of ideas and you'd find it hard to find authors who can match his incredible imagination, but at times we did feel that the author got a bit too immersed in theory. There are pages upon pages of descriptions of how society behaved in the various eras of the future, which can feel a bit tedious. If you love speculation on what technologies we could use in the future or how other civilisations could attack each other in interstellar wars, there's a lot of that in this book. There are parts where the book explores existence in two- and four-dimensions as well, as opposed to the 3D world that we currently live in.

While the characters weren't as interesting to us in this book, Liu manages to make one particular character stand out with a stroke of genius. Without venturing into spoiler territory, we can say that a character whose fate was uncertain in The Dark Forest returns with three fascinating fairy tales. Not only is the character incredibly resilient but they manage to pass on some critical scientific information hidden inside these fairy tales. The way information is buried in these tales is just pure genius and the tales, even when read in isolation, are excellent.

Death's End is not a book that will fill you with hope. It can get quite depressing at times. We ended up feeling sad for many of the characters and the human race in general, given the odds against them. When someone you can't even perceive can destroy entire star systems from afar threatens the existence of humanity, the tale is unlikely to have a happy ending. Liu's observations about humanity and the odds of its survival in the universe could very well be accurate. In the grand scale of the universe, humankind's existence can't even be equated with the blink of an eye.

Death's End is the culmination of an excellent trilogy and a landmark work in science fiction. That's not very surprising given that Cixin Liu has won the Galaxy Award (Chinese equivalent of the Hugo nine times) and is probably China's greatest science fiction author. If reading is not for you, then you can perhaps catch The Three-body Problem movie, which is scheduled to release in 2017 in China, but you'll need English subtitles.