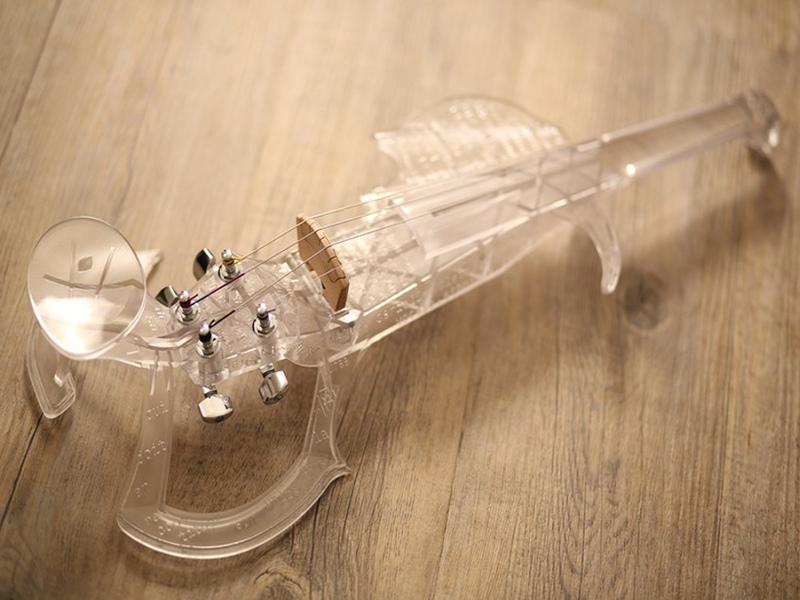 Methods for making violins are hundreds of years old. 3D printing on the other hand, is still some years from being ready for the mainstream. The recently launched 3Dvarious crowdfunded project brings these two technologies together - the result of which, is a 3D-printed, single-piece (no seams or joints to interfere with the sound), electric violin based on the model of a real Stradivarius violin.

The result is as beautiful as it is outlandish. Made out of a clear plastic resin, the 3Dvarius looks more like an alien octopus or a ray-gun of sorts, than a musical instrument.

The unique look has apparently been chosen for optimal sound-wave flow throughout its body. That combined with the fact that the entire unit is a single piece, allows for a richer, more natural sound, according to the Kickstarter page. The device can be played like an electric violin or as a traditional violin, and boasts of a number of small tweaks that make it - according to its creators - superior to a traditional violin.

There's no head on the 3Dvarius. Instead, it uses guitar tuning pegs to reduce the weight and simplify tuning the instrument. It's designed to feel like a regular violin though, and fits with any violin shoulder rest so any violinist should be able to pick up the 3Dvarius and play.

The pegs are also shifted close to the the base instead of at the neck to reduce the weight, and also shifts the balance closer to the violinist, making the 3Dvarius less tiring to play for extended periods.

Looking at the 3Dvarius page, it looks like an interesting blend of old and new technology, bringing together the fabled Stradivarius design and updating it with various small updates through 3D printing. The whole thing can practically be put together in just about 24 hours.

Here's a video that explains how the 3Dvarius works:

It's worth noting that most of the backer pledges are only for things like lessons from French violinist Laurent Bernadac, the creator of 3Dvarius. A EUR 49 (roughly Rs. 3,700) will get you a dummy model of the 3Dvarius, but you'll have to put in at least EUR 6,299 (roughly Rs. 4.75 lakh) to get the violin itself. That's a lot higher than you would pay for even a professional electric violin so this one is obviously just for the collectors. That said, it's certainly an amazing looking piece of technology, and most of the reviews of prototypes we found online are hugely positive, so if you're a movie star or tech millionaire looking for something futuristic to add to your shelves, take a look at the Kickstarter page.