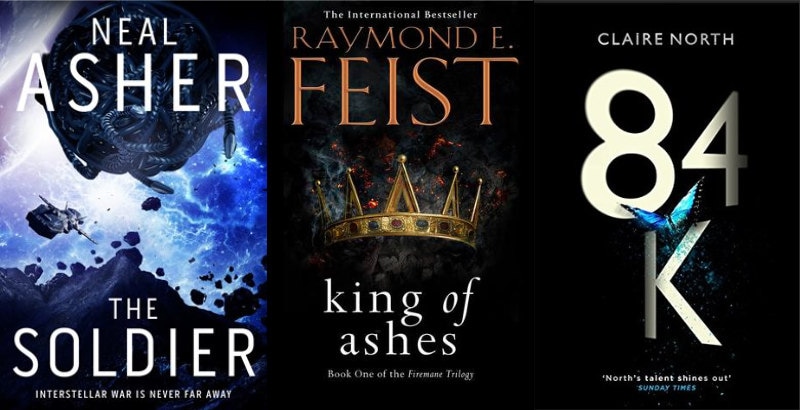 When an author as famous as George R. R. Martin announces a new book, all other book release announcements take a back seat. However, Martin’s prequel to Game of Thrones isn’t due until November and you’ve got to read other books until then. What better than some good science fiction to keep bibliophiles going?

May 2018’s list of new SFF releases has three really promising books, which we’ve listed below. Fantasy fans can rejoice as Raymond E. Feist is releasing a new book, and science fiction fans can also look forward to two promising novels in May.

The Soldier by Neal Asher
Neal Asher is a well-known science fiction author who specialises in space opera. He’s been writing novels for 18 years now and his body of works is vast enough to have an entire series of novels based in the same universe. This is called the Polity Universe, which has multiple series of novels such as the Agent Cormac series and the Spatterjay trilogy.

The Soldier is the first book of The Rise of the Jain series, also a part of the Polity universe. No, it’s not about the Jain religion, and yes, we’re also wondering why Asher chose to name an alien warrior race after a pacifist religion from India. With that out of the way, here’s what you can expect to read in The Soldier — the Jain alien race disappeared long ago but in a hidden sector of space one of their lethal weapons still exists. This weapon could end sentient life in the universe so the protagonist Orlandine is guarding it. Everything changes when it’s discovered that the Jain alien race might not be extinct and interstellar war could be very close.

King of Ashes by Raymond E. Feist
Raymond E. Feist is one of the big novelists in the fantasy genre. Feist’s Riftwar Cycle has a huge following, something the author himself didn’t expect when he wrote the first novel. His world building is unusual in the Riftwar series of books but if you get into it, the plot’s well worth following through to the conclusion.

The new book is King of Ashes, the first book in the Firemane Saga that’s set in a world called Tembria, which is ruled by five kingdoms. The four kingdoms betray Ithrace, which is ruled by Steveren Langene — known as the Firemane. After the Firemane is slain, his infant child is found and raised by a free lord. The child, along with a supremely talented swordsmith called Declan soon find their fates entwined with that of the world, where the real threat is yet to reveal itself.

84K by Claire North
Claire North, whose real name is Catherine Webb, is known for her young adult novels that she’s been writing since she was 14. She’s had novels published under the pen names Kate Griffin, which she uses for her fantasy novels.

Her latest book is 84K, which is set in a world where every crime has a fee assigned to it, and you can get away with anything as long as the debt is paid. This means that rich people can get away with murder as long as they can settle the debt with the Criminal Audit Office. Theo, who works at the audit office, assesses crimes and ensures that they are paid for, but he can’t do that when his ex-lover is killed and he looks to shake up the way society functions.

Which science fiction and fantasy books are you looking forward to reading in May 2018? Let us know via the comments.