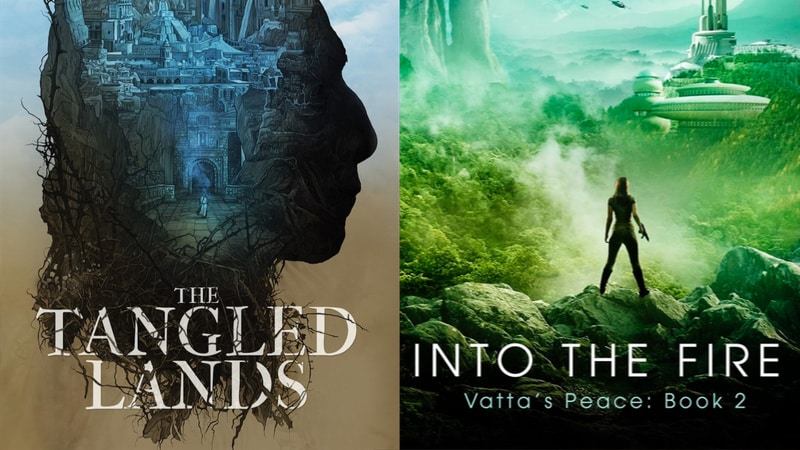 The Tangled Lands by Paolo Bacigalupi and Tobias S. Buckell
Bacigalupi and Buckell are both fairly well known authors in science fiction circles, with works such as Ship Breaker and Halo: The Cole Protocol amongst their bibliography. The two authors have collaborated to write this fantasy novel, which is particularly interesting for its strong environmental themes.

In this story, Khaim, The Blue City, is the last bastion of a fallen empire that turned toxic thanks to over-reliance on magic. The city is now controlled by a tyrant and a mage, who are now trying to collect all the magic for themselves to control the citizens of the city. This is beginning to destroy the environment, but can the people save it?

Into the Fire by Elizabeth Moon
Elizabeth Moon has been writing science fiction for nearly three decades with lots of series such as Planet Pirates, Familias Regnant, and Paksenarrion, among others under her belt. Into the Fire is the second novel in the Vatta’s Peace series, with its predecessor Cold Welcome having been published last year. This series follows five novels in the Vatta’s War series.

Into the Fire is a science fiction novel based on Earth, with the plot revolving around a ship that’s marooned on an inhospitable island on the Arctic circle. The crew stumbles upon secrets that some people are willing to murder for, as it discovers a mysterious base on the Arctic. Admiral Kylara Vatta takes it upon herself to uncover the secrets of this base, but is she prepared to learn more about her family’s biggest tragedy.

Child of a Mad God by R. A. Salvatore
R. A. Salvatore is one of the most prolific fantasy writers in the world right now. He’s written series such as The DemonWars Saga and Forgotten Realms, and needs no introduction to fantasy fans. Salvatore’s latest novel — Child of a Mad God — is the story of a young woman who finds herself alone in a tribe of vicious barbarians and how she came to know the world. The woman was born under the Blood Moon and she is the daughter of a witch. The title of the book hints at her parentage and forms a big plot point in this novel.

Which books are you looking forward to in February 2018? Let us know via the comments.

Further reading: Books, Science Fiction, The Tangled Lands, Into the FIre, Child of a mad god

Idea Offers Up to Rs. 2,000 Cashback on Karbonn Smartphones and Feature Phones
How Netflix's Global Rollout Saw Execs Trade Their iPhones for Android