Four Science Fiction Books You Must Read This December 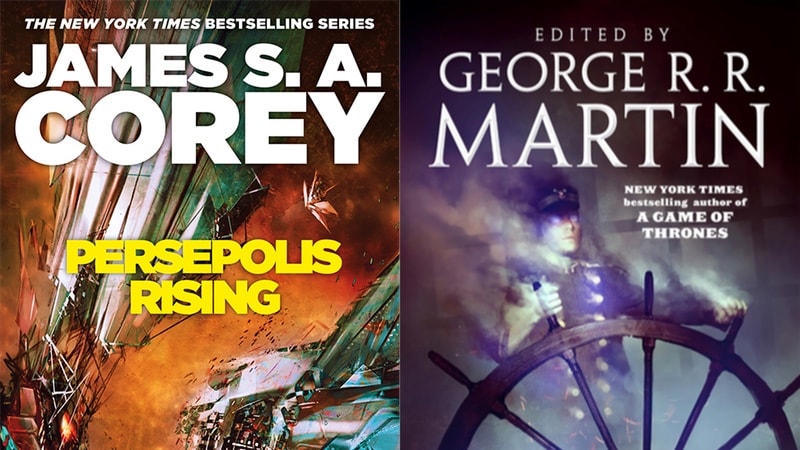 Another year has flown past us, with some stellar science fiction books releasing throughout 2017. Even in December, there’s no shortage of good books to read, with authors such as Ada Palmer, James S. A. Corey, and Ben Bova penning new novels. There’s even a book edited by George R. R. Martin, which might interest Game of Thrones fans too.

Persepolis Rising by James S. A. Corey
Daniel Abraham and Ty Franck are the two authors who collaborate under the pen name of James S. A. Corey. They gained fame after writing Leviathan Wakes, the first novel in The Expanse series, which is now also a TV show. This series tells the story of humans and their expansion across the galaxy.

Persepolis Rising is the seventh book in the series and it’s where you can read about the crew of the ageing gunship Rocinante, which is tasked with keeping the peace between colony worlds. By now, humanity has expanded to over 1000 solar systems and a large threat from a hidden enemy looms on the lost world of Laconia. This battle comes with a price that will change the shape of humanity. Since it's part of a series, you will want to read the earlier books first, but so far, they've been well worth your time.

Wild Cards: Mississippi Roll by George R. R. Martin
Before all you Game of Thrones fans get your pitchforks out, allow us to clarify that George R. R. Martin is the editor of Wild Cards: Mississippi Roll. The authors are Cherie Priest, Carrie Vaughn, David D. Levine, John Jos. Miller, Kevin Andrew Murphy, and Stephen Leigh. Now that we’ve established that Martin’s not writing another book while making you wait for The Winds of Winter, here’s why you might want to read this Wild Cards novel.

This is the 24th book in the Wild Cards series. Most of the books in this series are a bunch of short stories that focus on a central theme, which is why this has so many authors. Mississippi Roll tells the story of an adventure on a steamboat that’s still running on the Mississippi river in America. Each story is from the viewpoint of a different character on the boat, which is helping refugees who’ve arrived on American shores. The publisher claims that this will be a good entry point to the Wild Cards series even if you haven’t read any of the previous books.

The Will to Battle by Ada Palmer
Ada Palmer shot to fame through the Terra Ignota series that began with Too Like the Lightning and continued with Seven Surrenders. The Will to Battle is the third of the four volumes in this series, so you'll have to read the previous two volumes to understand the story. The series chronicles how a near-utopian human society of the future deals with a chaotic breakdown.

The Will to Battle takes the story forward by revealing exactly how the Hives — nations without a fixed location — kept order and peace for nearly three centuries. The leaders of these Hives now must deal with the fact that people are finding out all about their secrets and slipping back to the bloodlust of the past. War is about to begin.

Expected release date: December 5
Buy: The Will to Battle

Survival by Ben Bova
With over 100 books under his belt over a long and illustrious career as a science fiction writer, Ben Bova is one of the masters of the genre. Bova’s work includes The Grand Tour series, which spans across over 20 books chronicling humanity’s bid to settle worlds in our solar system and beyond.

Survival is a part of that series, and the Star Quest mini-series. The Star Quest series begins with the book New Earth, where humans find a planet that’s just like our own. In sequels — Death Wave, and Apes and Angels — the plot centres around the deadly wave of radiation that threatens to wipe out all sentient life from the Milky Way. To follow the plot in Survival, you'll need to read the previous books (or at least plot summaries) in this series. In Survival, a team of humans encounters a machine intelligence that has survived many death waves, but is uninterested in helping other species survive it. Will they be able to convince them to help or is biological life doomed?

Which was your favourite science fiction book of 2017? Which book are you looking forward to reading in December 2017? Let us know via the comments.