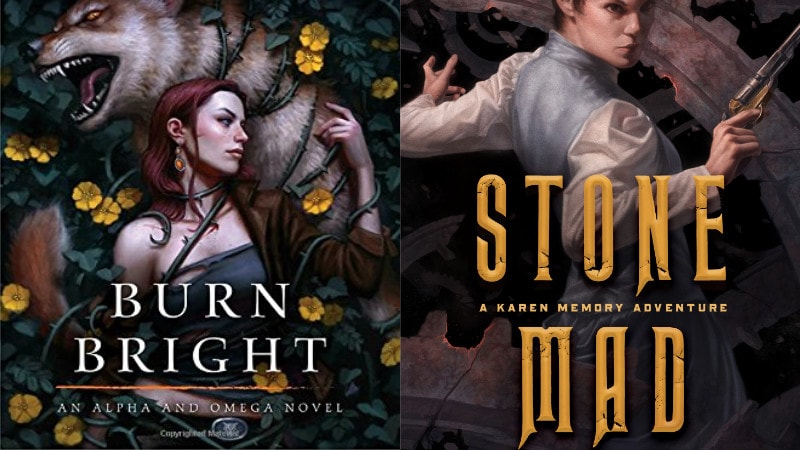 Like February’s science fiction books, March 2018’s big SF releases may not be associated with the biggest names in SF but there are quite a few hidden gems in there. We’ve picked out new authors with exciting works for this month and if you’re in the mood to check out different writing styles in science fiction books, this is a good month to kickstart your reading journey.

Burn Bright by Patricia Briggs
Patricia Briggs is a well-known fantasy author who’s written several large series of novels in the genre. The Mercy Thompson series, with 16 books, is the largest of these and also one of her most popular ones. Briggs’ latest book is called Burn Bright, which is a part of the Alpha and Omega urban fantasy series. According to Briggs, this series is set in the same universe as the Mercy Thompson series, but in a slightly earlier time.

Burn Bright is the story of werewolves too damaged to live safely among their own kind, and they have been exiled to the outskirts of Montana. Charles and Anna will have to use their skills to track down those who attacked a wild werewolf, which will reopen a painful chapter from the past that originates from one of the darkest aspects of the magic of the witchborn.

SF Masterworks: Classics Every Fan Should Own

Gods, Monsters, and the Lucky Peach by Kelly Robson
Kelly Robson is a relatively new science fiction novelist, with her book Waters of Versailles being one of the most highly rated among her works. Gods, Monsters, and the Lucky Peach is a science fiction novel set in the relatively near future that’s quite relatable for those of us aware of the devastating effects of climate change.

This book tells the story of Earth in the year 2267, when climate change has ruined the planet and it has only just begun to recover as humanity has taken refuge underground. The sub-surface population lives a hellish existence and some of them have moved back up to the surface of the planet. Their ecological restoration work comes to a grinding halt when they discover time travel, and the protagonist just can’t pass up the opportunity to survey the Tigris and Euphrates rivers in 2000BCE and to uncover the secrets of the stealthy group that controls time travel technology.

Stone Mad by Elizabeth Bear
Elizabeth Bear has had her speculative fiction works published for over a decade now and has received multiple awards for her writing as well. The Eternal Sky series is amongst her most popular works, and so is the Karen Memory series. The Karen Memory series began with a novel of the same name, where the protagonist is called Karen Memery. The book is set in the 19th century and has strong steampunk vibes, with a plot that revolves around a serial killer on the loose. The second book in the Karen Memory series is called Stone Mad. A magical creature found in the gold mines of Alaska is at the centre of this story as it threatens to bring down the things Karen worked hard to build. That happens because a group of spiritual people unexpectedly stir up the creature and Karen has her task cut out.

Void Black Shadow by Corey J. White
Corey J. White is a relatively new science fiction writer who is based in Australia. The Voidwitch Saga is his first published work and Void Black Shadow is the second book in the Voidwitch Saga, the prequel to which was Killing Gravity. It’s a relatively short space opera novella at just 144 pages but it’s well worth checking out. Its plot revolves around Mars Xi, a genetically manipulated psychic super-soldier who has killed thousands of people. Xi is a Voidwitch who’s unstoppable and this time, she won’t rest until she finds the people responsible for taking one of her friends.

Which science fiction book are you most excited about? Let us know via the comments.