While CoinMarketCap has informed its users that the “issue” has been fixed, it has not revealed if its servers detected any kind of a breach attempt. 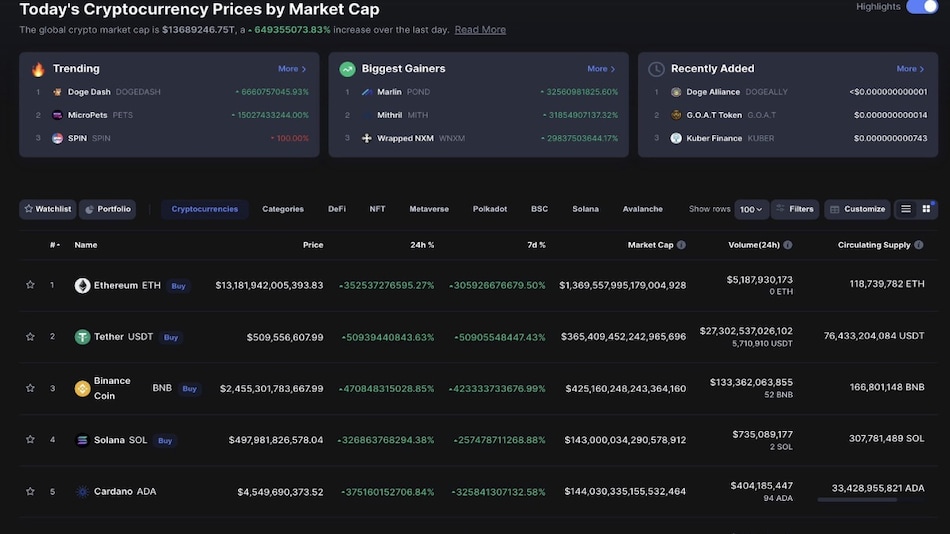 Amid the rising cases of crypto-related hacks, a weird instance left the followers of cryptocurrency website CoinMarketCap scratching their heads. On the eve of Tuesday, December 14, CoinMarketCap, touted as one of the biggest crypto websites globally, began flashing wildly erroneous prices for Bitcoin, Ether, and several altcoins. Relatively unknown cryptocurrencies were also being displayed in the list of top ten crypto coins on the website. The matter emerged to be one of the trending topics of discussions on Twitter, with several people suspecting a hack attack on CoinMarketCap.

Among random altcoins that made it to the list of the top ten cryptocurrencies on CoinMarketCap, Sora and Hex secured significant spots.

Either CoinMarketCap has been hacked or I'm next year's Time Magazine Person of the Year pic.twitter.com/XVZvD8wdxi

So #CoinMarketCap has been hacked which means my trust wallet shows I'm a billionaire... Where's the lambos at? pic.twitter.com/hZN5qSOgsK

This just happened. Coinmarketcap trying to send people to the hospital. It's a glitch. pic.twitter.com/yD48oAuWyw

How did it feel to be a trillionaire for a couple hours?:joy:

In a now deleted tweet, CoinMarketCap had acknowledged the issue.

“Our website is currently undergoing Price Issues. The Engineering team is aware of incorrect price information appearing on (the website). We are currently investigating and will update this status when we have more information,” the tweet read.

Later, the platform informed its followers that the “issue has been fixed”, not stating if its servers detected any kind of a breach attempt.

Following the irregularities we observed on our platform this afternoon, despite the issue having been fixed, we will be rebooting our servers as a final step in accordance with our internal remediation plan. Apologies for the inconvenience.

Meanwhile, hack attack fears among crypto users seem to be growing by the day.

A recent report on DarkWebLink revealed that cryptocurrency-related crimes in 2020 have amounted to around $10.52 billion (roughly Rs. 79,194 crore).

The number of crypto hacks targeting investors, gaming platforms as well as exchanges have also spiked in recent times.

Recently, a hack cost crypto-exchange Bitmart $196 million (roughly Rs. 1,479 crore) after the money stored in the form of various cryptocurrencies was stolen.

Earlier in November, US' Federal Bureau of Investigation (FBI) had said that cyber scammers are making innocent people use physical cryptocurrency ATMs and digital QR Codes to complete malicious transactions and dupe them of their assets.