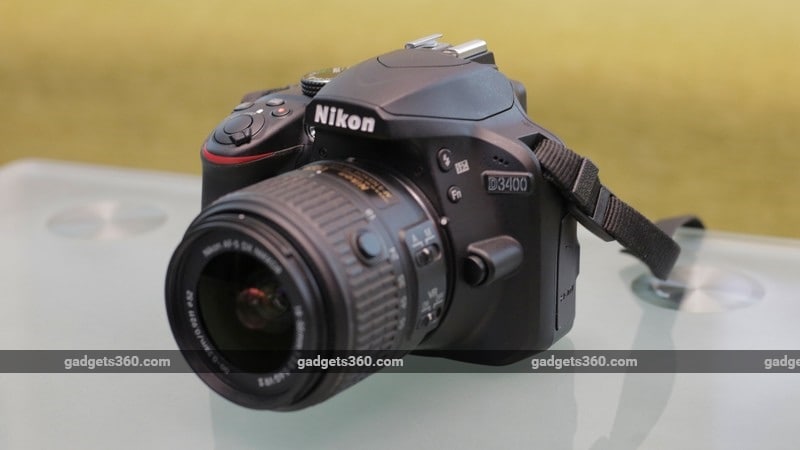 Nikon has long held a solid position in the entry-level DSLR segment with its D3xxx series of cameras. For a while now, the Nikon D3300 has been the go-to choice for many, since it offers much better features and performance for the price than Canon’s 1200D. Canon’s rebuttal arrived last year in the form of the 1300D, which added Wi-Fi connectivity for your smart devices. Nikon obviously wasn’t going to sit idly by, and in August, the company announced the D3400, which also offers wireless connectivity.

But how much of an upgrade is it from its predecessor? And should current owners of the D3300 consider upgrading? Let’s find out.

The Nikon D3400 shares the exact dimensions as its predecessor at 445 grams, it is lighter. The plastic body is well put-together and the camera has a reassuring grip when you hold it. Button layout is also the same as on the previous model. At the back, you get a column of buttons to the left of the display for the menu, playback, image magnification, and quick access to settings during shooting. The right of the display has buttons for live view, deleting files, switching between drive modes, and navigation.

There’s an AE-L/AF-L toggle just beside the command dial, for locking the exposure or focus. In terms of connectivity, the D3400 now has a standard Micro-USB connector and a Mini-HDMI port. Nikon has dropped support for an external microphone here, which means you won’t be able to use a better microphone when recording video. The 3-inch display has a 921K-dot resolution which is decently bright for most use cases, but not under direct sunlight where it tends to wash out. The optical viewfinder is capable of displaying basic information like exposure settings, and the there’s a built-in pop-up flash along with a hotshoe for external flashes.

There’s a standard tripod mount at the bottom along with the battery compartment. The SD card slot is on the right. We have a ‘Fn’ button on the front of the camera which is customisable. The last cluster of buttons is on the top, and includes the power switch and mode dial plus buttons for shutter release, video recording, exposure compensation, and displaying information. The mode dial has ridges around its edges for easier grip.

Overall, the Nikon D3400 is built well and is fairly compact, which is what beginners will appreciate. However, we wish Nikon had done a bit more in terms of functionality, like adding a secondary command dial or more function buttons.

You can buy the body separately or get it with the new 18-55mm f/3.5-5.6 VR or 70-300mm f/4.5-6.3 VR AF-P lenses. The main difference between these and the current AF-S lenses being sold with the D3300 is the inclusion of a stepper motor, which is said to allow for quicker and quieter autofocus, which should bring down noise when shooting videos.

The core specifications of the D3400 are pretty much identical to those of the D3300. The camera has a 24.2-megapixel APS-C CMOS sensor and uses Nikon’s Expeed 4 image processor. You get a total of 11 focus points, RAW image support, and contrast detection autofocus. ISO sensitivity ranges from 100 to 25,600 with increments of one stop. The camera supports shutter speeds of 30 - 1/4000 second and a burst speed of 5fps. Video recording tops out at 1080p at 60fps, just like with the D3300. 4K video support would have been really nice to have here, or even a higher maximum frame rate at full-HD resolution.

The one new feature added to the D3400 is support for SnapBridge, which lets you automatically transfer pictures from the camera to your smart device. The app is available on Android and iOS, and connects to the D3400 via Bluetooth. You can set photos to sync even when the camera is switched off. It works the same as when we first tested it with the Nikon D500, however you cannot transfer videos or control the camera remotely since the D3400 does not support standard Wi-Fi. This is one area where Canon’s 1300D fares better thanks to built-in Wi-Fi and NFC.

The screen and GUI are once again very similar to what we’ve seen on earlier Nikon cameras. The Setup menu is easy to navigate through, as all the settings are nested under separate menus for playback, shooting, setup, and retouching. There’s also a ‘Recent Settings’ tab that lets you quickly get to the ones you use frequently. Pressing the ‘i’ button in standby mode now enlarges the row of options at the bottom of the screen, making them easier to see. The new monochrome look is similar to what we saw with the D500.

Nikon has done away with its auto dust cleaning system for the sensor, which is a shame, although this camera still captures ‘Image Dust Off’ reference data for cleaning photos in post-production. There’s still no bracketing feature in the new model, something we wish had been incorporated.

ISO performance was pretty impressive. There are just mild variations till ISO 3200, as noise is barely visible. At ISO 6400 and ISO 12800, it does become noticeable but it’s still very much within bounds and doesn’t mess with the colours. The detail level takes a slight dip here, but it's noticeable only when you look at a 100 percent crop of the picture. At ISO 25600, details get very mushy and colours are muted. Still, this is not bad at all for an entry-level DSLR and it goes to show how capable the sensor really is.

The Nikon D3400's size makes its very convenient to carry around when you travel. Plus, it's less imposing, which makes it better for street photography as you don’t look overly conspicuous trying to get candid shots. Focusing speed is good and the camera is quick to lock focus. In live mode, you now get face-priority autofocus, which is handy when shooting people. Subject tracking works pretty well too.

In daylight, the D3400 captures detailed landscapes with minimal to no barrel distortion. There’s very mild chromatic aberration around the edges of distant objects, but nothing jarring enough to ruin the shot, even if you crop it later. Switching from the kit lens to something more premium like the AF-S 16-80 f/2.8-4E ED VR helps the D3400 reach its full potential. The level of sharpness in close-up shots is stunning, and there's zero artifacting around the edges subjects. Colours are also bolder and look more natural.

Video recording tops out at 1080p at 60fps, just like with the D3300, so you can play around with slow-motion effects in post later on. Continuous autofocus works well in video mode, but the motor sound from the lenses we used was unavoidable.

Apart from the standard PSAM shooting modes, there are different scene modes that you can choose from. You can also edit photos within the camera itself from the retouch menu, and of course export them to your phone or tablet. Burst mode is pretty usable, as 5fps gives you a decent chance of capturing good motion shots. Low-light performance is very good just as long as you cap the ISO at 12800. You can also set a minimum shutter speed in order to avoid blurry motion shots at night. Colours are once again fairly accurately captured although the level of detail will depend on your ISO setting.

The camera body doesn’t have any stabilisation system but all DX lenses now have decent vibration reduction mechanisms. Luminance noise is visible in dark areas of images but chroma noise is kept well in check. The pop-up flash is effective, but when compared to the D3300's, it’s actually a bit weaker.

The Nikon D3400 uses the same battery as the D3300 but the new model is rated to deliver 1200 shots per charge, which is a big improvement over the D3300 which was rated for 700. We did manage to come close to this number during our testing, however, do note that leaving Bluetooth on will drain the battery within half a day, even if the camera is turned off. It’s best to switch to airplane mode when you don’t need images transferred to your phone immediately.

Verdict
The D3400 retails online for about Rs.29,990, which is what Canon’s 1300D goes for as well. Between the two companies, Nikon has the stronger product at this price, both in terms of performance and features. It has better ISO performance at higher sensitivities, a useful burst mode, and good video capabilities. The addition of Bluetooth is a bonus, although the 1300D is the only choice if you want the ability to control your camera remotely via your smartphone. Nikon also throws in a camera bag and an 8GB SD card to sweeten the deal.

Right now, it makes sense to buy the D3400 over the D3300, as for a bit more money, you get wireless connectivity and a quieter lens. Unless the D3300 falls drastically in price, you’re better off with the newer model. Current owners of the D3300 have no real reason to upgrade, as there isn’t much to gain in terms of image or video performance.