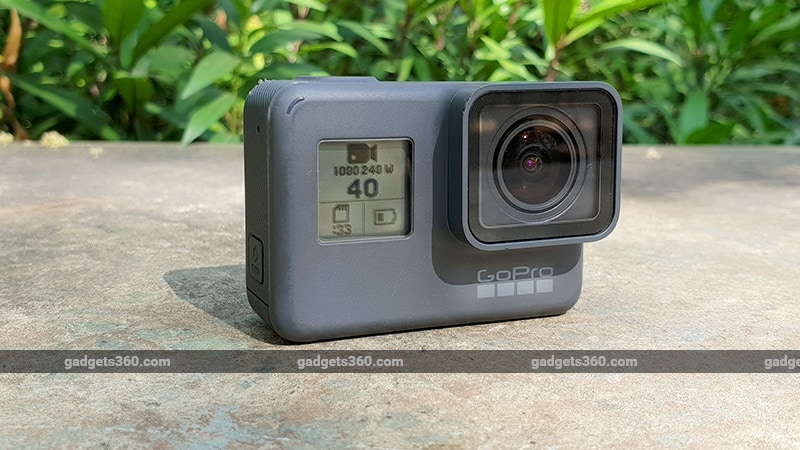 GoPro’s latest flagship action camera, the Hero6 Black, arrived in India last year at a rather steep price of Rs. 45,000. However, the company cut that down to Rs. 37,000 in January. While this is still higher than what it retails for in the US, it’s a welcome improvement. The new model brings the Hero series up to speed with support for newer video codecs such as HEVC for capturing 4K video at 60fps or 1080p video at 240fps.

There are other improvements as well, such as the ability to digitally zoom in to your shot, HDR still photography, and improved stabilisation. Let’s take a look in our review of the GoPro Hero6 Black.

Looking at the exterior of the camera, the Hero6 Black looks and feels very much like the Hero5 Black. It has the same blocky design with a grey rubberised coating over most of the body. You get a large shutter release button on the top, and a smaller Mode/ Power button on the side. The Hero6 Black doesn’t have any built-in storage so you’ll need to invest in a microSD card. There's a microSD slot on the bottom of the camera, along with the compartment for the removable 1220mAh battery.

There’s a small non-backlit display in the front just beside the lens, which shows you what shooting mode you’re in, and the battery level. You also get a touchscreen at the back, which is useful for framing your shots and changing settings. The Hero6 Black has a flap on the side, which protects the USB Type-C port and a Micro-HDMI port. This flap can be removed with a gentle tug, allowing the camera can be used with accessories like the GoPro Karma Grip. There are also three microphones, and three red LED status lights placed around the camera so you can always see at least one.

The Hero6 Black ships with the same set of accessories as most GoPro cameras. In the box, you get a flat and a curved adhesive mount, the mounting cage, and a baseplate. The cage is needed to attach the Hero6 Black to any GoPro accessory. The camera is backwards-compatible with accessories designed for previous Hero models,  so you can use you existing mounts, if you have any.

The Hero6 Black features a 12-megapixel wide-angle sensor that’s capable of shooting up to 4K video at 60fps. There's also a new GP1 processor, which promises to deliver nearly twice the performance as that of the Hero5 Black. A new 4K (4:3) aspect ratio mode is now available with this model as well. Just like before, there’s a wide selection of lower resolutions and framerates to choose from, including 2.7K, 1440p, 1080p, and 720p. GoPro has dropped the 960p resolution option, along with the Narrow and Medium field of view (FOV) options, leaving you with SuperView, Wide, and Linear. SuperView shoots 4:3 video and then stretches it horizontally to 16:9. While this gives you wider frame, it also creates the most barrel distortion. The Hero6 is water resistant up to a depth of 10m without the need for any external housing.

You can issue voice commands to the Hero6 Black just like before, by using the keyword ‘GoPro’ followed by the command. We found this to work pretty well provided you speak in a slight accent and are loud enough. You can even wake the camera up from standby with your voice, which is handy. However, it isn’t very effective in a noisy environment or if the camera is too far from you.

Electronic image stabilisation helps smoothen out footage when there’s motion. Three-axis stabilisation was previously limited to only a handful of modes with the Hero5 Black, but on this model, it can work at up to 4K 30fps.

The Hero6 Black now uses the 5GHz Wi-Fi band for connecting with your smartphone, so transferring content is slightly faster. Bluetooth and GPS are also available.  The camera syncs with the GoPro app, which is available for Android and iOS. You can change settings remotely, use your phone’s display as a viewfinder, and transfer all your footage to your phone. The Hero6 Black also works with QuikStories, which is GoPro’s automated story creation tool.

Its touch response is good and navigating the menus is simple enough to master, even for first-time users.  We found the default brightness level to be adequate during the day, although you can increase it if you wish. The shooting modes and settings indicators are displayed prominently in a bar at the bottom of the screen, and it only takes a few taps to change the resolution or framerate.

The main shooting modes include Photo, Video, and Time Lapse, and they have nested modes such as Burst in the photo mode and a few low-light options for time lapse and photo modes. Sadly, GoPro has ditched the Video + Photo mode, which we last saw on the Hero5 Black. In this mode, the camera saved a still photo every few seconds while recording video.

There’s a new Touch Zoom option in the video mode, which lets you perform a digital zoom before you start shooting. The option is available only with certain resolution, framerate, and field of view combos. It’s a nice addition but video quality is degraded, especially when you’re shooting in low light. During the day, the Hero6 Black captures good footage. We took most of our videos at either 4K 30fps or 4K 60fps, and we’re quite happy with what this little camera can achieve. The higher framerate at 4K does add some nice fluidity to videos. Contrast levels are very good, and the camera is quick to adapt to varying light conditions.

When using the SuperView FOV, objects towards the edges of the frame exhibit a lot of barrel distortion, and this is slightly better when using the standard Wide FOV. You can now shoot slow-motion footage at 1080p at 240fps, which looks very nice. However, we noticed that such footage does require a relatively powerful PC or smartphone for smooth playback. This is mainly due to the newer HEVC or H.265 codecs being used, which isn’t widely supported just yet. You can check and see if you desktop machine or mobile device will be able to handle such high bit-rate videos on GoPro’s website.

We found that stabilisation worked decently. Even when we had the Hero6 Black mounted to the front of a motorcycle, it managed to compensate for vibrations quite well. When using the camera handheld, it also coped well, although jarring movements did result in some jerkiness in our test footage. Photos turned out nicely too, although in low light, we found it best to switch to Night Photo mode, which automatically adjusts the shutter speed based on current conditions. Handheld shooting at night isn't recommended, as even slight movements will lead to blurring.

You can choose from several burst rate options, the highest being 30fps, just like on the Hero5 Black and Hero5 Session. A Class 10 microSD card is the minimum requirement in this mode, and for our testing, GoPro sent us a Lexar 32GB UHS-II microSD card.

Low-light stills and videos were decent as long as there was ample artificial light around. However, when shooting at night with only streetlamps illuminating the scene, there was a noticeable loss in detail in distant objects, and darker regions had a bit of graininess. Dynamic range is still handled quite well, and the sensor is able to capture colours decently well.

Like most GoPros we’ve tested before, the Hero6 Black tends to run hot when shooting video. Battery life varies a lot, based on the resolution you’re shooting at and whether you have Wi-Fi and GPS turned on. On average, we managed to get about an hour's worth of recording time at 4K, which is not bad. Keep in mind that leaving the camera idling or playing around with the shooting modes will also eat into your expected battery life.

Verdict
The GoPro Hero6 Black is an iterative upgrade to the Hero5 Black, and the main appeal here is the support for newer video recording standards. There's wider resolution support for the electronic stabilisation, and other little improvements such as faster Wi-Fi connectivity. GoPro cameras are often used for professional filmmaking too, for example in action sequences that would typically not permit the use of traditional cameras. For use cases like this, filmmakers will appreciate the extended framerate support at 4k and 1080p. For regular users, Rs. 37,000 is still a significant investment, especially you’re only going to be using the camera on occasional weekend getaways. For many casual users, the Hero5 Black is still worth considering, because at Rs. 27,000, it offers most of the features of the newer model.

For those who want the convenience of a touchscreen but want to save even more money, GoPro has recently announced the GoPro Hero priced at just Rs. 18,990, and the balance of value and features that it offers could be good enough for a lot of people.