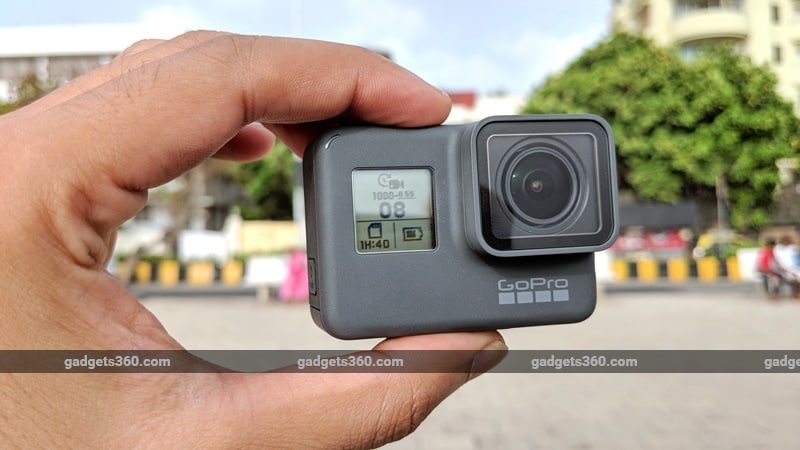 GoPro arguably makes some of the best action cameras, but these are not things you can buy on a whim because they are generally pretty expensive. Still, there's a dedicated market for them, which is evident by the fact that two of GoPro's most expensive offerings - the Hero6 Black and Hero5 Black - accounted for over 60 percent of sales in the first quarter this year.

A couple months ago, the company launched a more affordable action camera, simply called GoPro Hero, and it's now on sale India for Rs. 18,990. This makes it the most affordable GoPro model with a display to date, and puts it in the territory of the Hero5 Session. Naturally, the affordable price means that some features have been sacrificed, but what do you actually get? Let’s take a look.

The new Hero has the same physical dimensions as its bigger siblings, and the same layout of buttons and physical connectors. It weighs 117g, and as part of the bundle, you get a plastic housing for mounting it onto any GoPro-compatible mount, as well as two adhesive mounts, a Type-C charging cable, and the usual snap-on stand. You’ll have to buy a microSD card separately.

The Hero is waterproof up to 10m by itself, which means that no additional housing is required. The build quality is excellent, and the body is covered completely in a rubber coating. There are flaps to protect the battery and ports. On the left, we have Micro-HDMI and USB Type-C ports, while the battery and microSD slot is at the bottom. You get three red status LEDs and three microphones placed around the camera, just like on its more expensive siblings.

There’s a non-backlit status screen in the front, and a touchscreen at the back. The touchscreen has good brightness under direct sunlight, however the interface isn’t as responsive as on the Hero6 Black. There’s a bit of lag when moving across different menu screens.

The Hero features a 10-megapixel sensor, unlike the 12-megapixel one used in its premium siblings. The processing capabilities are also limited, due to which the GoPro Hero is only capable of 10fps bursts and can shoot at a maximum resolution of 1080p at 60fps. There is a 1440p option, but this uses a 4:3 aspect ratio (1920x1440), which may not be useful for everyone.

GoPro has carried over important features like voice control, video stabilisation, support for the QuikStories app, and fast charging (with an optional accessory). However, in-built GPS has been ditched in order to keep costs down.

Slower image processing means that many of the premium models' shooting modes and advanced features like ProTune, raw photo, and audio capture have been removed. You still get all the standard modes like Video, Photo, Burst, Timelapse video, and Timelapse photo, but there are fewer choices when it comes to resolutions and framerates.

For instance, in video mode, your only option is 1080p at either 60fps or 30fps. You get different fields of view (FOV), but SuperView is not supported. It’s a little strange to not have any resolution lower than 1080p, which could perhaps allow for a higher framerate. Other modes we've become familiar with, such as Night Photo which lets you set the shutter speed, Looping for using the camera as a dashcam in your car, and Night Lapse Photo, are also not there.

For photo mode, you can enable WDR or Wide Dynamic Range, which is essentially HDR. While this helps brighten up shadow areas while still maintaining a good exposure in brightly lit portions of the frame, the captured photos tend to have subdued colours. The level of detail is decent for an action camera, just as long as you don’t need to zoom and crop too much. Timelapse videos can also only be shot at 1080p but the interval is restricted to only 0.5 seconds, which is quite limiting.

Video quality is good when there’s ample natural light. Colours are vibrant and light metering is handled well. Stabilisation works decently well when shooting at 30fps and 60fps. Videos are smooth, with a steady framerate. In low light, footage gets a bit noisy although it still has decent dynamic range. Audio quality is just about average, which is what we’ve come to expect from such cameras.

The GoPro Hero syncs seamlessly with the GoPro app, which lets you control and adjust various settings. You can watch the content that you’ve shot, transfer it, update the camera's firmware, and use your phone as a viewfinder for shooting remotely. The app is available on Android and iOS.

The GoPro Hero has the same 1220mAh battery as its premium siblings. In our tests, with Wi-Fi switched off, we managed to shoot continuously at 1080p for 1 hour, 52 minutes on a single charge, which is not bad. This can vary a lot though based on how long the camera is in standby or if you have Wi-Fi enabled. It takes about two hours to fully charge if you use a wall power adapter. If you're charging through a laptop, expect a much longer wait.

Verdict
The new GoPro Hero costs around as much as the Hero5 Session, which sounds great at first since you finally get a GoPro with a display at this price. But that doesn’t necessarily make it the better pick. The Hero has an upper hand thanks to its bigger battery, rear display and HDMI output, but at the same time, has very limited shooting modes compared to other models, and you’re pretty much stuck at 1080p.

The Hero5 Session on the other hand might have a weaker battery and no display, but it shoots 4K video, has more shooting modes, and is much smaller. Sadly, it seems that GoPro is phasing out the Session series, as this model isn't even listed on its website anymore.

If you’ve been longing for a full-sized GoPro and don’t mind the limited versatility, then the Hero is your best bet. On the other hand, if you want a more control over the final product and better features, than the Hero5 Session is the better option, if you can still find it in the market.