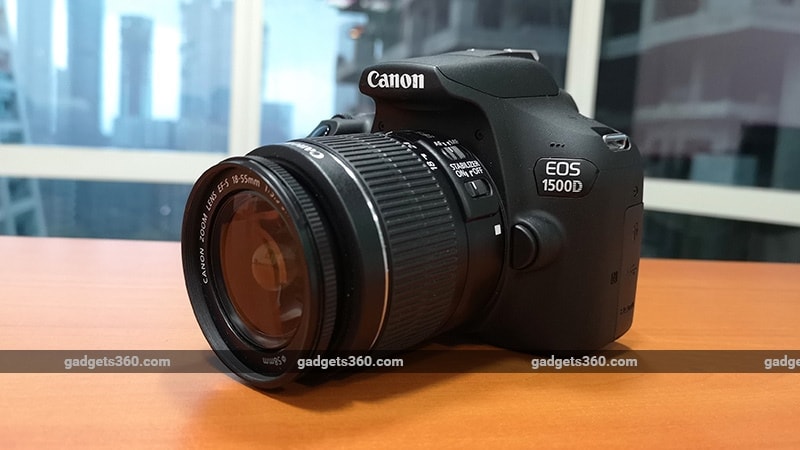 The quality of smartphone cameras these days has reached a point where it doesn't make sense for most people to invest in a standalone digital camera. Of course, if you want better manual control and zoom, then getting a DSLR or even a mirrorless interchangeable lens camera makes sense, as these give you the flexibility of adding different lenses. Most good mirrorless cameras still have a high entry barrier, which is why entry-level DSLRs are still an attractive option for many.

In this space, Canon and Nikon have been trading blows for many years now. Canon’s last entry level model was the 1300D, which tuned out to be a minor refresh over the EOS 1200D, as far as performance was concerned. This year Canon has once again refreshed its entry level line up with not one, but two new models. The EOS 1500D and EOS 3000D are the new kids on the block, off which, we have the former with us today. Canon has finally upgraded the sensor, which puts it more in line with Nikon’s D3400. Let’s see how much of an improvement it really offers.

Physically, the EOS 1500D looks pretty much identical to its outgoing sibling. It’s roughly the same size and weight as its predecessor and as far as button placement goes, it’s exactly the same. One-handed shooting is easy and it still offers good grip thanks to ample rubber cladding on the right side of the camera. There’s no getting around the unmistakable plastic finish, which doesn’t feel too premium but that's to be expected for a basic DSLR.

On the left, there’s a flap which covers inputs for a wired remote, a Mini-USB port, and a Mini-HDMI port. It’s a little strange to see Canon still sticking to a Mini-USB port, even in 2018. You get the same 3-inch TFT LCD with a 920K dot resolution, with no touch or swivel support. The optical viewfinder offers 95 percent field of view and there’s a little dial for diopter adjustment. The 1500D offers a pop-up flash with the option of connecting external flashes too via the hot shoe connector. You get plenty of buttons for accessing quick settings (‘Q’ button), shortcut buttons for drive mode, ISO, white balance and autofocus adjustments. These buttons are also used for navigating the menus.

There’s a dedicated LED light at bottom which lights up when the Wi-Fi connection is in use. The mode dial on the top has a solid feel and the grippy texture makes it easy to switch modes even with greasy fingers. The power switch also has a reassuring click to it. You also get a vertical command dial for changing ISO, exposure, etc values, which is placed just before the shutter button. Overall, the EOS 1500D doesn’t feel much different from the ESO 1300D, which is not necessarily a bad thing. It’s light, easy to carry around and has just the right amount of buttons which makes it less daunting for novice users.

Canon sent us the EF S18-55 IS II kit lens, which the 1500D is typically sold with. This is a pretty standard lens that’s useful for most shooting scenarios. It offers 3x optical zoom, has a switch for manual focus or autofocus, and a built-in stabiliser. You also get a shoulder strap, a 16GB Class 10 SD card, battery, and charger in the box.

The biggest change in the Canon EOS 1500D is the sensor resolution. It’s now a 24.1-megapixel APS-C sensor, compared to the 18-megapixel APS-C sensor on the 1300D. However, besides this, little else has changed, if at all. It still uses a Digic 4+ image processor and features a native ISO range of 100-6400, 3fps burst shooting, and video recording up to 1080p at 30fps. You also get just nine autofocus points including one cross-type point in the centre.

Just like the 1300D, the EOS 1500D features NFC and Wi-Fi for connecting it to your smartphone. With NFC, the entire process is automated which makes it very easy to set up with an Android phone. On an iPhone, you’ll have to enter the Wi-Fi password of the camera manually. Once setup, the Canon Camera Connect app lets you view images that are on the SD card of the camera and you can even use your phone’s display as a viewfinder for remote shooting.

The app offers the same functionality on both platforms. When importing images, you can choose if you want a lower resolution or the original image transferred to you phone. The lack of Bluetooth doesn’t let you have an always-on connection, so images need to be manually transferred as and when needed.

In our ISO test, we check to see how the sensor handles noise as the ISO values are increased. This also gives us an indication of how the camera will perform in low light shots, where you have to use a high ISO value to get a properly lit image. The 1500D has an ISO range of 100-6400 (which can be expanded to 12800). We’ve not put shots of ISO 100 and 200 in the chart below as when compared to ISO 400, there’s a negligible difference.

Even going all the way up to ISO 1600, noise is handled well and details are preserved. When we jump to ISO 3200, however, there’s a noticeable drop in detail in the sharpened portion of the pencils, which appear smoothened out. This details drop a bit further as you go to the highest ISO level. Chroma noise is visible slightly here as the colours look a bit muddy.

In landscape shots, the EOS 1500D’s higher resolution offers plenty of scope for cropping images later on if you need to. Level of details is good but getting a sharp image can be tricky. Even in ‘P’ mode, with plenty of good light and steady hands, we ended up with soft landscape shots intermittently. There’s mild chromatic aberration too but this isn’t too noticeable. Objects in the centre of the frame have decent level of sharpness but those on the side tend to appear a bit blurry. Focusing speed is decent, as you’d expect from an entry level DSLR. The kit lens produces decent depth of field too for close up shots, which is nice.

We found the auto white balance to be a little inconsistent though, as many times we ended up with with varying degrees of colour tones in the same set of burst images. Some of the macros that we shot ended up with oversaturated colours at times. Close ups have good detail though and edges are well defined in most cases. However, the burst mode isn't too helpful with fast moving subjects. 3fps is simply not enough for the job, which is a shame.

Besides the standard programmable shooting modes, you can go full auto with the ‘A+’ mode or switch to modes like Portrait, Landscape, Sports, etc, which automatically sets up the camera for the desired scene. When viewing images in the camera, you also have the option to rotate, rate and add creative filters like soft focus, grainy black and white, etc.

In low light, it’s best to limit the ISO to 3200 within the camera, so you avoid getting too much chroma and luminance noise in low light shots. Even indoors with artificial lighting, images tend to lack good sharpness when you zoom in all the way, which limits the cropping potential. Dynamic range is also fairly average. The xenon flash has good spread and helps when shooting in very low light.

Video recording maxes out at 1080p at 30fps, which is good but is still a bit behind the competition that has been offering 60fps full-HD video for years now. Quality of video is good but you’ll have to manually focus or use the shutter button. The latter isn’t ideal, as the sound of the motor is also captured in the video clip, which sounds terrible in the end.

The EOS 1500D uses the same LP-E10 battery as the 1300D, which in this case, is rated at to deliver 600 shots per charge on average. When we tested it, we managed to get close to this number (about 480 shots) but our usage also involved using the flash, live view and video intermittently. Having Wi-Fi enabled will also have an effect on the overall battery life.

Verdict
The MRP of the Canon EOS 1500D is set at an absurd price of Rs. 37,995 with the kit lens, but most DSLRs are never sold at their full price. If you look online, you can find this same package for about Rs. 30,000. This is roughly Rs. 6,000 more expensive than the EOS 1300D its set to replace. This premium would have been justified if Canon has given the 1500D a more sizeable upgrade then just a resolution bump, but sadly that’s not the case. Even with the increased resolution, the camera still has a crippled burst mode, average ISO performance and does’t quite deliver satisfying results easily. On the other hand, the camera is built well, is light and easy to master and lets you connect to your smartphone over Wi-Fi.

The Nikon D3400 continues to be a strong contender at Rs. 30,000, and it’s the one we’d recommend if you’re looking to buy your first DSLR.