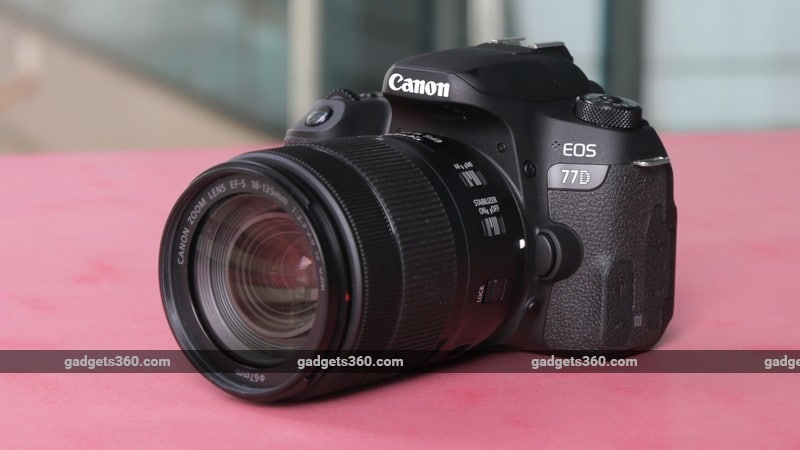 Earlier this year, Canon refreshed its mirrorless and enthusiast-level DSLR lineup with the introduction of the EOS M6, EOS 77D, and EOS 800D. Going by Canon's numbering scheme, the new 77D and 800D DSLRs are aimed at beginners with some enthusiast-level features for when they master the craft over time. The new models also make some higher-end features, like the Dual Pixel autofocus system, more accessible to users.

Today, we'll be testing the EOS 77D, which slots in just below the EOS 80D and above the 800D. The EOS 77D and EOS 800D are priced within Rs. 10,000 of each other and are very similar in terms of features, except that the 800D lacks a secondary LCD and a few shortcut buttons, which is one of the reasons it costs less.

Let's see if the Canon EOS 77D makes a strong case for itself as a value-minded semi-enthusiast DSLR.

The 77D has a plastic body which, at 540 grams, is lighter than that of the 80D. There are rubber grips on either side for your palms and another at the back for your thumb. This model lacks any form of weather sealing but we found that it can handle a light drizzle without any fuss.

On the left side, we have flaps covering the remote control terminal, external mic socket, Micro-HDMI port, and an old-styled Mini-USB port. The NFC contact point for pairing is also placed here. The mode dial is placed on the top left of the camera with a locking system, and a power switch that lets you jump straight to video mode. The optical viewfinder uses a pentamirror to reflect light from the lens to the viewfinder rather than a pentaprism, which is generally heavier and more expensive to implement. We also have a hot shoe terminal and a built-in pop-up flash above the viewfinder. An infrared sensor turns the LCD off when you bring the camera up to your eye.

To the right of the viewfinder, we have another cluster of buttons for live view, AF-On, and magnification. A second control dial lower down also doubles up as a four-way navigation pad. The multi-function lock switch at the bottom can be used to lock the primary or secondary dials or the touchscreen. The secondary LCD lets you check settings like ISO, aperture, shutter speed, battery level, and the Wi-Fi and Bluetooth status at a quick glance. The articulating 3-inch LCD has a 1,040k dot resolution and supports two-finger multi touch input. The touchscreen can be used for changing settings in the menu and viewing pictures.

We received an 18-135mm EFS lens with the body, which can be bought as a bundle from Canon. The lens features a built-in image stabiliser, aperture of f/3.5-5.6, and a switch to lock the lens when not in use.

The Canon 77D features a 24.2-megapixel APS-C sensor with Canon's new DIGIC 7 image processor. Light sensitivity ranges from ISO 100 to 25,600, shutter speed ranges from 30 to 1/4,000 seconds, and the burst shooting tops out at 6fps. The camera has 45 autofocus points, all of which are cross-type, along with phase detection pixels on the sensor for video and live view. The latter is what enables the 77D to seamlessly switch focus between subjects when shooting video, which is a big advantage compared to most DSLRs which rely on the contrast detection AF system alone. Unfortunately, video recording maxes out at 1080p at 60fps, which is a bit disappointing.

Some of the notable improvements however lie in the firmware. The Canon 77D has something called 'Guided Mode', which can be enabled for the shooting screen, menus, and the mode guide. This gives you a visual representation of what you can expect from shots based on which way you adjust the slider. So for instance, say you're shooting in aperture priority mode, the graphical representation on the screen shows you what sort of effect you can expect by decreasing or increasing the aperture. This encourages you to use the touchscreen, by making the icons larger and easier to use.

Hitting the 'Q' button at the back gives you quick access to toggles including white balance, drive mode, picture size, metering, type of focus, etc. You can either use the touchscreen or either of the two dials to manipulate the settings.

The Creative Filters option on the mode dial lets you add effects such as soft focus, fish-eye, etc to your photos. You even get special filters for video like a film-grain effect, miniature, black and white, and more. The Custom Functions option in the menu lets you access features like the expanded ISO mode, which bumps up the maximum ISO to 51,200; adjust the level of exposure increments (one-third or half); toggle the state of the AF assist beam; and more.

We begin with the ISO test to gauge how this camera handles noise when the ISO level is pushed upwards. It's also a good indicator of how the camera performs in low light. One thing to keep in mind is that the Canon 77D only allows ISO jumps at full stops, and you cannot make adjustments by one-third or half a stop. We start at ISO 800 as there's no discernible difference in image quality between ISO 100 and that level. Sharpness goes down a notch at ISO 3200 but the image is still noise-free. At ISO 6400, we begin seeing a small amount of noise in the shadows. At the highest ISO level, details start to deteriorate but there's still no visible chroma noise, which is quite impressive.

The EOS 77D works with the Canon Connect app for Android and iOS, for remote shooting and transferring files to your smartphone. Even when paired using Bluetooth, the camera will need a Wi-Fi connection to your device, even if you want to simply view the photos on the camera. With the dedicated Wi-Fi button, you can jump to a list of previously paired devices or set up connections to a Wi-Fi printer, a desktop PC (through the EOS utility), or a cloud service through the Canon iMAGE Gateway. This is the same as we saw when reviewing the Canon PowerShot G9 X Mark II .

The buttons on the Canon 77D have good tactile feedback and fall in place under your fingers nicely. The power lever felt a bit stiff and rough, but other than this, we didn't have any issues with usability. The fact that there's no headphone socket might frustrate those who want to use this camera for professional recording.

In daylight, the 77D does a good job of capturing accurate colours and good detail. We found that the 18-135mm lens isn't all that sharp, and this is evident in the slightly soft macro shots we got. There is very mild chromatic aberration in some scenes but it's mostly kept in check. Thankfully, we didn't have trouble with other artifacts like barrel distortion in our pictures.

The Creative filters are where you can really have some fun. 'HDR art standard' combines three consecutive exposures to give you an HDR photo, while 'HDR art bold' boosts colours to give you an oil painting effect. 'Grainy B/W' is another effect (seen above) which we found quite useful. There are similar effects for videos too, which add a fun element to shooting. Burst mode works well although 6fps isn't ideal for fast-moving animals or birds. The camera's high ISO prowess can be seen in low-light shots. Details were maintained fairly well and noise was kept to a minimum even when we had the ISO set to Auto.

The 77D has good video capabilities thanks to the Dual Pixel AF system. Autofocus mode includes subject tracking, smooth zone AF, and 1-point AF. Subject tracking works decently, but if your subject's motion is too erratic then the camera has a tough time keeping up. The phase detection system shifts focus between subjects smoothly, without any focus hunting lag, or the irritating motor sound that plagues most DSLRs. You can use the touchscreen to shift focus too. Another neat feature is electronic image stabilisation, which has two levels. With it enabled, frames are cropped a bit but the end result is more stable footage.

The 77D is rated at 600 shots per charge and we managed to come close to this number during our review period, but features like Wi-Fi and Bluetooth do have an impact here. Your mileage will vary drastically depending on if you have these features on or not.

The Canon EOS 77D is a feature-packed DSLR that's positioned just below the EOS 80D in Canon's lineup. If you don't need the secondary display on the top or the second control dial at the back, then the slightly less expensive 800D could serve you just as well, as its features are pretty much identical to those of the 77D. New additions like the guided mode and Dual Pixel autofocus are great to have, but we also wish that this camera supported more current-day features like 4K video recording and maybe finer controls over the ISO level.

The Canon 77D gives you all the flexibility of a DSLR plus good battery life and a variety of inexpensive lenses to choose from, and video performance is also much better now.  If you buy this camera with the 18-135mm kit lens, the price shoots up to Rs. 89,995, which feels a bit too expensive. While the lens is versatile enough for close-up and long-range shooting, we would have liked more sharpness in our images. If video is what you're after then you should consider a mirrorless camera like the Sony A6300, which retails for around Rs. 67,000. It doesn't have the best battery life or a very user-friendly interface like the 77D, but you do get much better video capabilities like 4K recording, much faster autofocus, and burst mode.