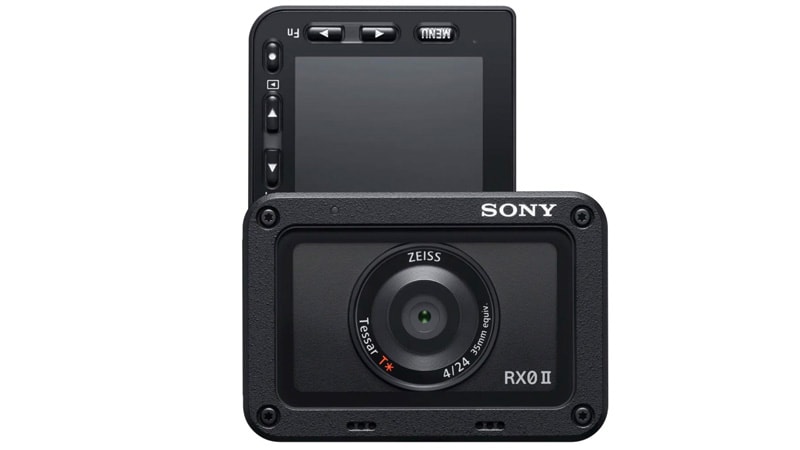 Last year, Sony re-invented its action camera line by introducing the RX0, at CES 2018. A year later, the company has released a follow-up called the RX0 II, which features improved specifications and features such as a flip-up LCD display, internal 4K video recording, stabilisation, and much more. The camera is priced at $700 (roughly Rs. 48,270), and will become available starting April.

The Sony RX0 II features a 1-inch stacked CMOS sensor with a lower resolution of 15.3-megapixels, compared to last year's model. It has a 24mm fixed wide-angle lens with an f/4 aperture and a minimum focusing distance of 20cm, which Sony claims, is good enough for selfies and table-top photos. It measures just 59x40.5x35mm, weighs 132 grams and is water resistant up to 10 metres deep, apart from being dustproof, shockproof, and crushproof.

Unlike the previous version, the Sony RX0 II can now do internal 4K video recording at up to 30fps with oversampling, which means one can expect smoother and richer quality output. There's also in-body electronic image stabilisation for the first time. Thanks to the stacked sensor, the camera can also do Super Slow Motion video recording in short bursts at up to 1000fps.

One of the biggest features that missing in pretty much any other action camera is the presence of a 180-degree tilting LCD display, which makes it a great tool for vlogging or simply framing your selfies. The display can also tilt 90 degrees downwards but it still doesn't have touch input as you have physical buttons around the display for navigating the menus.

Other than video, the RX0 II also has an anti-distortion shutter of up to 1/32,000 seconds and has the ability to shoot 16fps continuous shots. The camera also has optical filters such as a Soft Skin Effect and the Eye AF has been upgraded to for better portrait shots. Just like before, the camera still supports uncompressed 4K output via HDMI, picture profile support such as S-Log2 and Time Code functions.