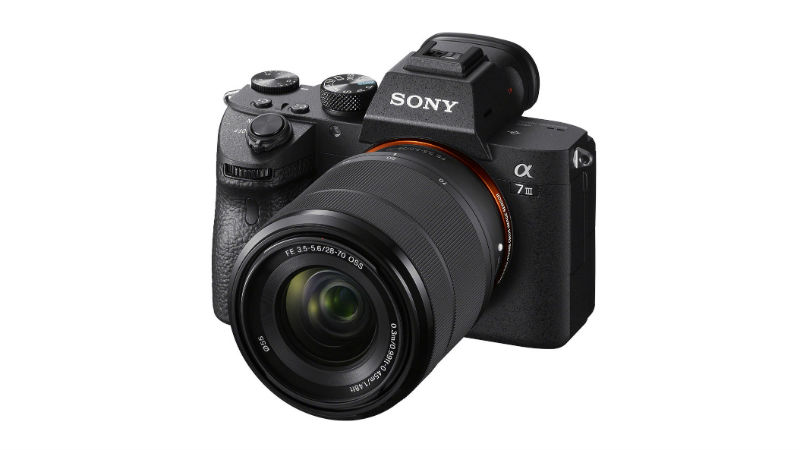 Sony on Thursday launched the A7 III camera in India with a newly-developed 24.2-megapixel back-illuminated Exmor R CMOS image sensor, expanding its entry-level full-frame mirrorless offerings in the country. The new camera, which was announced globally last month, will go on sale starting March 26 with a price tag of Rs. 1,64,990 (body only). The bundle kit (A7 III body and 28-70 lens) will be available at Rs. 1,79,990.

The Sony A7 III is designed to offer a fast-shooting experience at up to 10fps speed under a dedicated high-speed mode that can be accessed with a mechanical shutter or in silent shooting. There is also AF coverage of up to 93 percent. Further, Sony has provided a 693-point focal-plane phase-detection AF system (PDAF) that was introduced on the A9, supporting 425 contrast AF points. The camera has an updated BIONZ X processing engine that is claimed to boost processing speed by nearly 1.8 times compared to the A7 II.

Sony has provided an ISO range of 100-51200 (expandable to ISO 50-204800 for still images) and 15-stop dynamic range at low sensitivity settings. The A7 III packs high-precision stabilisation that uses a built-in stabilisation unit, gyro sensors, and algorithms to achieve a 5.0-step shutter speed advantage in a system that is touted to compensate five types of camera shake with a wide range of lenses.

The upgraded image processing engine on the Sony A7 III supports continuous, accurate AF/auto exposure tracking for up to 177 standard JPEG images, 89 compressed RAW images or 40 uncompressed RAW images. Also, the camera has 4K video recording support across the full width of the full-frame image sensor. There is also 4K HDR support in addition to options such as 120fps high-speed video at 1080p as well as S-Log2 and S-Log3 colour profiles.

For an easy focus experience, the Sony A7 III has a multi-selector and a joystick to let users move the focusing points in a frame quickly. There is also touch focus support as well as AF availability in Focus Magnifier mode, and an 'AF On' button. The camera has a 2.3-million-dot XGA OLED viewfinder and a touch-supported LCD monitor. In terms of connectivity, Sony has included USB Type-C port and Wi-Fi. There are also dual media slots, with one supporting UHS-II type SD memory cards.

The A7 III additionally includes a customisable 'My Menu' feature that allows users to register up to 30 menu items for instant recall. Similarly, there are a total of 81 functions that are assignable to 11 custom buttons. The battery life on the A7 III has been extended as well when compared with its predecessors, with up to 710 shots per charge. Sony India claims that the camera offers world's longest battery life for any mirrorless camera.

Vivo X21 With Snapdragon 660 SoC, Android 8.1 Oreo Spotted on Geekbench
Stephen Hawking Taught Us It Was Right to Be Wrong