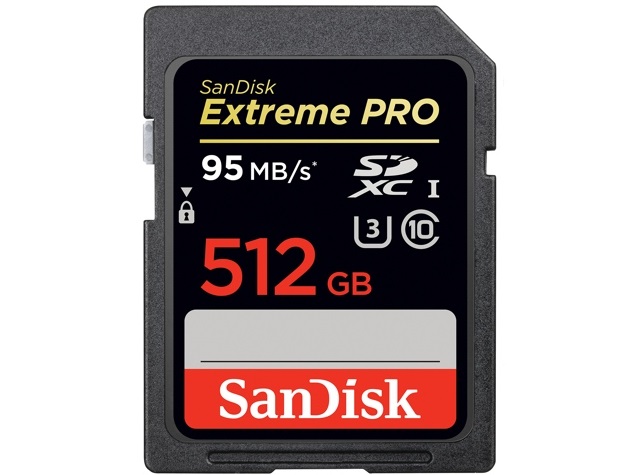 After announcing it last week, SanDisk on Wednesday took the wraps off what it is calling the "world's highest capacity SD card" - the 512GB SanDisk Extreme Pro SDXC UHS-I memory card - at an event in Mumbai and it is priced at a steep Rs. 51,990.

The card is targeted at still photographers and videographers who shoot 4K Ultra High Definition (UHD), 1080p (FHD) videos, and capture photographs in high-speed burst mode. The American storage company also went on to launch what it claims to be the world's fastest microSD UHS-I memory card, the 64GB SanDisk Extreme Pro SDXC UHS-I. These microSDHC and microSDXC UHS-I cards are available in capacities of 32GB and 64GB which start at Rs. 4,700 and go right up to Rs. 9,700.

SanDisk claims that the 512GB Extreme Pro SDXC UHS-I card can deliver write speeds of up to 90MB/s and transfer speeds of up to 95MB/s. Additionally, the card is built and tested to work in harsh conditions as a result of which they are temperature proof, water proof and shock proof. It also has a lifetime limited warranty and has support for RescuePRO Deluxe data recovery software (download required) for recovering accidentally deleted images. All SDXC and SDXC-I (UHS-I) enabled host devices should be able to use the card without issues. On the other hand, the 64GB SanDisk Extreme Pro SDXC UHS-I card features Class 10 and UHS Speed Class 3 (U3) ratings.

Speaking at the event Rajesh Gupta, Country Manager India, SanDisk Corporation said, "Features like 4K Ultra HD video recording, which were once only available on high-end device, have quickly gained popularity and adoption and we are committed to enabling the next generation of video capture and sharing with these cards."

The Extreme Pro SDXC UHS-I memory card is also available in 128GB and 256GB variants but surprisingly SanDisk hasn't revealed the prices yet.