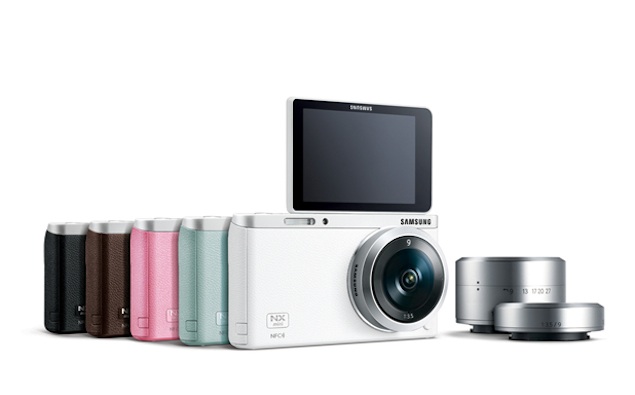 Consumer electronics giant Samsung on Wednesday unveiled the latest camera from its stables - the NX mini - part of its 2014 Smart camera range that feature Wi-Fi and NFC connectivity for easy sharing. Touted as the lightest and thinnest camera featuring interchangeable lenses, the Samsung NX mini still does not feature availability or pricing details. The NX mini features a large 1-inch type 20.5-megapixel BSI CMOS sensor, and will be available in White, Pink, Mint Green, Brown, and Black.

The Samsung NX mini mirrorless interchangeable lens camera comes with a leather finish over a solid metal body, and will feature support for a total of 15 interchangeable NX lenses using a special NX-M Mount Adapter. The NX mini has a 3-inch, 320x480 pixel touchscreen that can be flipped up 180 degrees. Because of this 'flip up and touch display' and its ensuing form factor, Samsung is positioning the camera as a 'wefie' shooter as against a selfie taker. A 'wefie' is described as two or more people taking their picture, as against a single person. The NX mini also features a 9-mm wide angle lens that allows the user to click a 'wefie' by winking at it. Two seconds later the camera takes what the company is calling a 'wink-shot'.

Speaking about the camera at the launch Myoung Sup Han, Executive Vice President and Head of the Imaging Business Team at Samsung Electronics says, "The NX mini has both style and substance, perfect for trendsetters looking for a fun way to capture their life in outstanding photo quality. Samsung introduced the first flip up touch display camera in 2011 as a leader of the selfie trend, and has designed the device in response to evolving consumer demands. This approach is exemplified by the NX mini, with features such as a 3.0-inch flip up display and wide angle lens exclusively designed to address the global passion for selfies."

The NX mini can shoot pictures at 6fps in the Continuous Shot mode and also has a 1/16000 second shutter speed for fast moving scenes. The ISO range on the camera is from 160-128000. The NX mini will feature extensive storage options where users can upload pictures directly to Flickr and Dropbox. Dropbox has also provided users with a free 2GB of cloud storage. Flickr on the other hand offers users a chance to upload a terabyte of images.

In addition the NX mini also has Wi-Fi and NFC integration. The Samsung Tag & Go feature will allow the camera to pair with other NFC-enabled devices. Users can select and transfer multiple images, control the NX mini via a smartphone, using remote View Finder Pro and can also use the camera as a baby monitor when paired with a smartphone via an app.

According to Samsung the NX mini is the lightest interchangeable-lens camera. It has a body weight of 158 grams, and a slim 22.5 mm design. Three types of NX mini lenses that have been introduced include the NX-M 9mm ultra-slim, wide-angle F3.5 ED lens that can be used to take selfies. The NX-M 9-27mm F3.5-5.6 ED OIS micro-compact zoom lens and the NX-M 17mm F1.8 OIS bokeh lens are the other two lenses
Comments