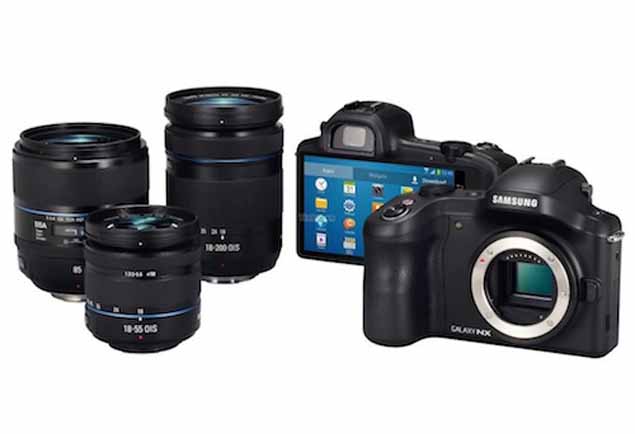 There have been news reports suggesting that Samsung will be revealing its Galaxy Camera 2 at its "Samsung Premiere" press event being held on June 20th. Recently some leaked images of this camera too were leaked online. Just days before the camera is due for an official release, its press shots too have been spotted online.

The photos have been posted on Vietnamese website camera.tinhte.vn, which claims that this camera will be dubbed Galaxy NX. If these leaked pictures are indeed true, then the Samsung Galaxy NX has very little resemblance to the existing Samsung Galaxy Camera.

Furthermore, Galaxy NX is also bigger in size than any other mirrorless cameras that Samsung is currently offering. From the leaked images, it also appears that the Samsung Galaxy NX camera will have no physical buttons. It is also likely to come with a 4.3-inch touchscreen with qHD display.

Internally, Samsung Galaxy NX will pack in Samsung's Exynos 4 quad-core processor along with 2GB of RAM. The camera will either offer 8GB or 16 GB of internal storage.

From the leaked press shot, it also appears that Samsung will be offering at least three compatible NX lens options for its Samsung Galaxy NX camera.

So far there is no word on when this camera will start retailing and what could be its tentative price.

Samsung is expected to unveil new Galaxy and Ativ devices on June 20 in London.