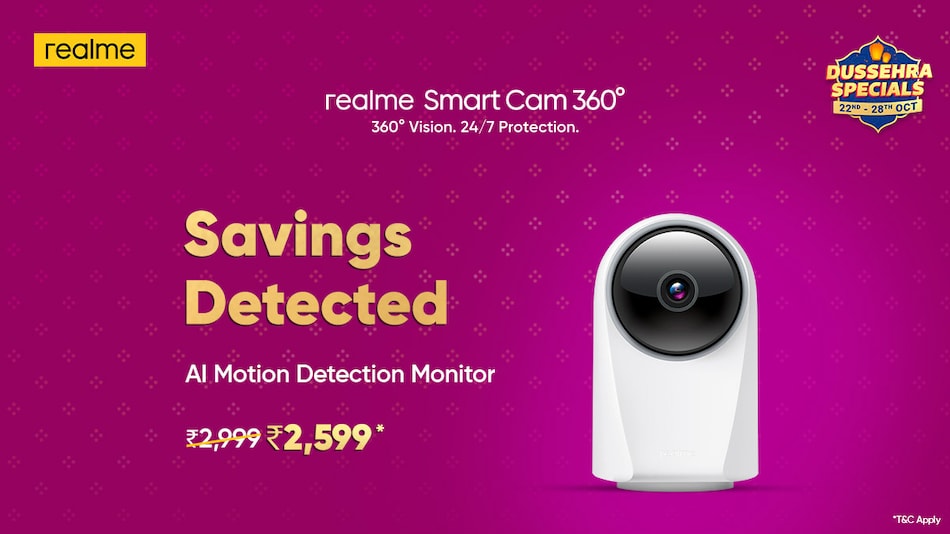 Realme Smart Cam 360 will be available at a special discounted price on Flipkart during the e-commerce platform's Dussehra Specials sale. Launched at Rs. 2,999 initially, the festive offer cuts the price by Rs. 400, making the security camera slightly cheaper. It must be noted that the sale will end on October 28. Realme Smart Cam 360 is one of the many products in the company's IoT lineup and it comes with full-HD video recording.

Realme Smart Cam 360 is currently priced at Rs. 2,599, down by Rs. 400 from its regular pricing. Launched earlier this month, the camera went on sale on October 16, and is now available on Flipkart at the discounted price till October 28.

Originally unveiled at IFA 2020, Realme Smart Cam 360 was launched in India along with Realme N1 Sonic Electric Toothbrush and Realme 20,000mAh Power Bank 2 as a part of Realme's IoT lineup. It is able to record videos in full-HD (1080p) resolution. It supports AI motion detection for real time alerts, and customers can also use two-way voice talk for remote calls.

Customers also get 3D noise cancellation for better image quality, wide dynamic range (WDR), and a physical cover for the lens. The camera has a mechanical gimbal that allows for 360-degree panoramic footage to eliminate a potential blind spot. Realme says that the camera automatically activates Night Vision Mode when the sun goes down.