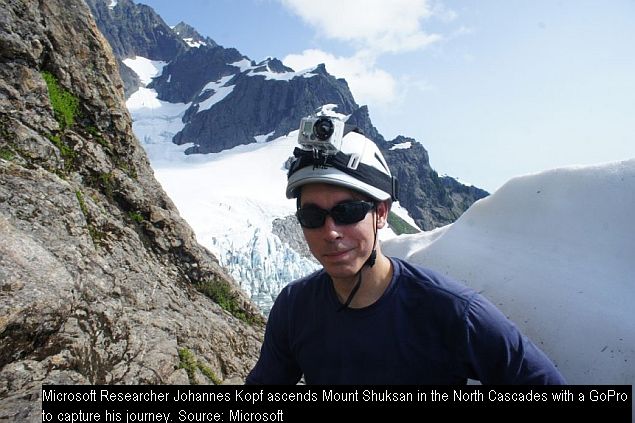 The GoPro is a small camera that can be mounted on a helmet or attached to your body to capture high quality videos from a first person view. It has been immensely popular amongst athletes and extreme sports enthusiasts, used for capturing the view of something like a bungee jump, or free-running across rooftops. A researcher at Microsoft has developed a technology called Hyperlapse, to solve one of the big problems with these videos - unwanted camera shake.

Last week, you might have seen the fantastic video of Kama the pig, surfing with a GoPro camera on the front of the board, and one on his back.

When the GoPro is attached to a stable surface like the surfboard, it is pretty amazing, but when the view switches to the camera attached to the pig, you quickly notice one issue with the system - it shakes violently with every small move.

This is not a big problem, unless you have a really long clip - of a hike, for example, and then try and speed it up. Speeding up the video magnifies the effect of the camera shake dramatically. Microsoft researcher Johannes Kopf had a long video of a hike, and he realised that when you speed up the clip, the shake makes the video unwatchable. A Microsoft blog post describes how Kopf , who works with Microsoft's Interactive Visual Media Group, found that the existing image stabilisation techniques were not able to compensate for the camera's constant movement.

As noted in the post, the Interactive Visual Media Group focuses on the areas of computer vision, image processing, and statistical signal processing, specifically as they relate to things like enhancing images and video, 3D reconstruction, image-based modelling and rendering, and highly-accurate correspondence algorithms that are commonly used to "stitch" together images.

Kopf and his colleagues took on a project to smooth out his hiking video, and the result is a technology that they are calling Hyperlapse, which virtually eliminates all camera shake. The video below demonstrates Hyperlapse in action, and the results are really exciting:

Hyperlapse takes into account the way the camera is moving throughout the video, and plots out a smoother path, adding pixels from other video frames to rebuild scenes. As seen in the video, there is still a little stiffness - it doesn't look perfectly smooth - but the results are far better than the existing stabilisation techniques also shown in the video.

This "filling-in" of visual information from other frames is inspired by the way we humans see things; the human brain "fills-in" blind spots that the eye doesn't capture. Hyperlapse isn't ready for a public roll-out yet, however, as work is still being done to render the smoothed videos faster, with fewer visual artifacts. However, it could have a major impact on film-making, both amateur and professional.

Until then, you could always try strapping a chicken to your GoPro.