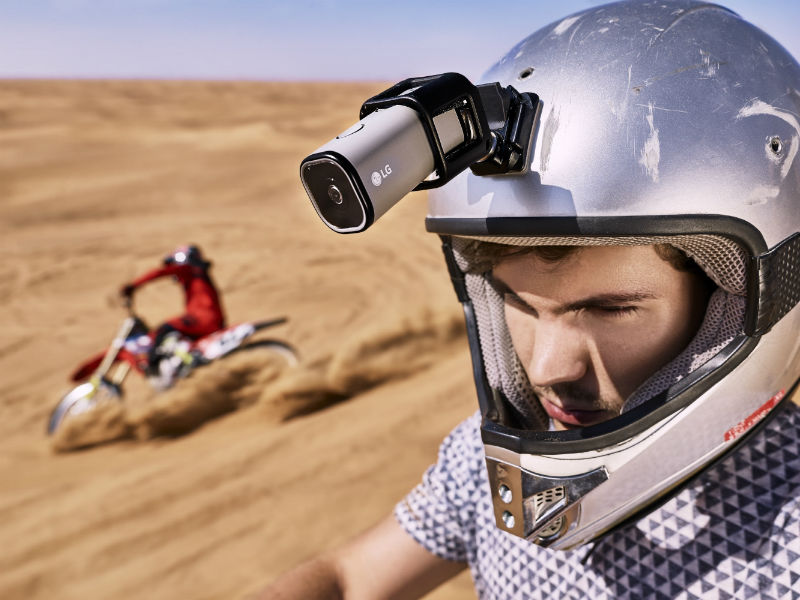 Consumer electronics giant LG on Thursday introduced a standalone live action camera called the LG Action Cam LTE. The biggest highlight of the camera is the built-in LTE connectivity that allows it to live-stream videos directly to sites such as YouTube live without the help of a smartphone.

The LG Action Cam LTE is a small cylindrical device that could be fitted easily onto helmets, bicycles, ATVs, and inside pockets. It has a 12.3-megapixel camera with 150-degree wide angle lens. It houses a 2GB of RAM and 4GB of inbuilt storage. The storage can be extended up to 2TB with the help of a microSD card. Interestingly, the weight of the LG Action Cam is just 95 grams.

Apart from LTE connectivity, the camera also gives support for Wi-Fi and Bluetooth. The camera is backed by a 1400mAh battery which lasts for four hours of full HD video recording. It also houses an accelerometer, gyroscope and GPS.

The LG Action CAM has IP67 certification which means that the camera is protected from sand, dust and can be immersed in up to one metre of water for about thirty minutes. The device will be available in a light grey color variant in the market.

Furthermore, the company further asserts that it looks to also offer remote access feature which will enable the device to be used as a CCTV camera for home monitoring or as an automobile dash camera. However, the remote access feature will only see the light of the day in July through a software update by LG.

This camera may be the first standalone live action camera from a major manufacturer with built-in LTE connectivity for direct streaming. GoPro has not managed to build LTE connectivity into its device yet. LG has revealed that it will only announce the pricing and availability details of the LG Action Cam LTE next month in South Korea. The action camera will first be launched in South Korea, followed by North American and European markets. A fully waterproof case will also be made available in the third quarter of this year, LG says.
Comments

Six Days Worth of Commercials: That's How Much Watching Netflix Instead of Cable Saves the Average TV Viewer Annually
iPhone 7 Plus Lineup to Sport Dual Cameras and 3GB RAM: Report