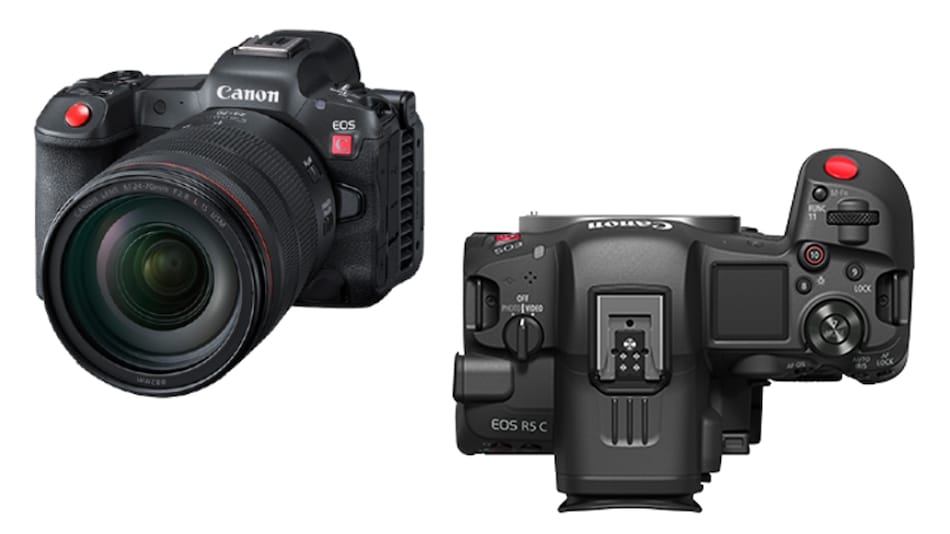 Canon EOS R5 C hybrid camera has been launched in the US. The full-frame camera borrows some elements from the Canon EOS R5 mirrorless camera, and the Cinema EOS product line to offer “best of both worlds.” The body of Canon EOS R5 C is quite similar to Canon EOS R5 with little alterations such as a red shutter button, among others. As per the company, the new camera can capture 8K (8192x4,320 pixels)/60fps RAW cinematic video shooting, and is aimed at filmmakers, multimedia journalists, as well as advanced amateurs.

Canon EOS R5 C packs a 45-megapixel full-frame CMOS imaging sensor, paired with Digic X image processor which allows the camera to capture great images as well as up to 8K/60fps RAW cinematic videos. Canon says that the camera can capture still images at speeds of up to 20fps, and its Dual Pixel CMOS AF II capability “can track split second movements” of moving vehicles. The camera comes with 1,053 Automatic AF zones for high-quality and sharp images. The camera comes with 13 marked, assignable buttons that allow users to customise camera operation.

When it comes to video shooting, Canon EOS R5 C works as a Cinema EOS camera. It features a cooling fan built into the body to throw the heat out, facilitating continuous video shooting at 8K/60fps. Interestingly, it is the first Cinema EOS system camera to offer internal 8K/60fps RAW recording. Canon says that the new offering supports recording of two 8K formats: Cinema RAW Light that is great for post-production grading and archiving, and MP4 which is optimised for faster online use.

Apart from these two, the camera offers support for MXF-based XF-AVC format for broadcasting standards. The Canon EOS R5 C camera supports HDR recording in Hybrid Log Gamma (HLG) and Perceptual Quantization (PQ) formats. It can also record High Frame Rate (HFR) movies at up to 4K/120fps in 4:2:2 10-bit without cropping the sensor.

Lastly, the EOS R5 C camera offers enhanced image stabilisation when Canon's RF lenses with optical IS are combined with the EOS R5 C camera's electronic IS while shooting XF-AVC or MP4 formats. Connectivity options on the camera include dual-band Wi-Fi and Bluetooth to help transfer images quickly.