When Peeping Tom Takes to the Skies 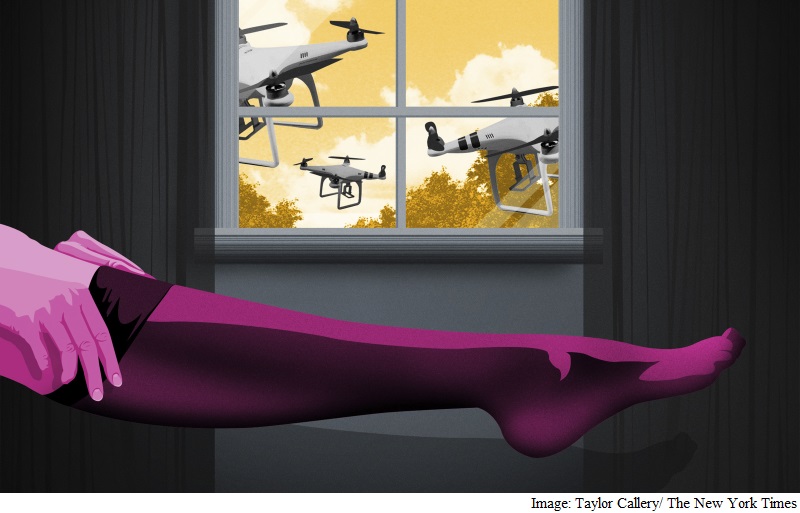 As a columnist who tests a lot of technology, I often write about my own experiences. But what happened last week was downright surreal.

It started on Thursday, when I began reporting a column about drones and the altercations they are causing among neighbors. The way these spats usually go, one neighbor gets a new drone (often around Christmas) and begins flying it around the backyard. Then, naturally, the drone flies over to the neighbor's yard. Then, the neighbor gets upset, especially because most recreational drones these days are equipped with cameras.

Some voice their outrage through social media. "My neighbor just flew a drone to my window and was recording me," a Twitter user wrote this month. "I have never talked to him in my life."

Others use their fists, or worse.

In 2014, a 32-year-old man was arrested after he shot down his neighbor's drone in Lower Township, New Jersey, when it flew over his yard, police said. He was indicted on felony charges and could face 10 years in prison.

Last July, William Merideth, 47, shot down his neighbor's drone in Louisville, Kentucky, saying it was spying on his 16-year-old daughter while she was sunbathing by the pool. He was arrested, but a judge ruled that Merideth had the right to shoot down the drone and dismissed the case.

Merideth has since become somewhat of an anti-drone spokesman, calling himself the drone slayer. "The only people I've heard anything negative from are liberals that don't want us having guns and people who own drones," he recently told The Washington Post.

When I first read these news accounts, I felt sorry for those tormented by their neighbor's annoying little copters. How rude and intrusive, I thought.

And then it happened to me.

I was sitting in my home office, working on this very column about neighbors getting into arguments over drones, when I heard a strange buzzing sound outside. I looked up, and hovering 20 feet from my window was a black drone with a beady-eyed camera pointed at me.

At first, I was upset and felt spied upon. But the more I thought about it, the more I came to the opposite conclusion. Maybe it's because I've become inured to the reality of being monitored 24/7, whether it's through surveillance cameras or Internet browsers. I see little difference between a drone hovering near my window and someone standing across the street with a pair of binoculars. Both can peer into my office.

But I may be in the minority here. When I mentioned it to my wife, she was outraged by the intrusion and briefly contemplated buying a shotgun, should my neighbor's drone reappear near our bedroom window. Unlike binoculars, she argued, a drone can actually enter your property and see from more invasive vantage points.

Not surprisingly, the law has not caught up to the technology. In 2013, the Congressional Research Service, a legislative branch agency within the Library of Congress that provides analysis to Congress, published a report, "Integration of Drones Into Domestic Airspace: Selected Legal Issues," that warned of the various ways in which drones could be used for "stalking, harassment, voyeurism and wiretapping."

But the report also noted that "determining whether a drone in flight is trespassing upon one's property may be unusually challenging."

In some ways, the privacy concerns being raised about drones echo those from earlier technologies.

As a 1990 article in The New York Times noted, customers buying telescopes in cities were not hoping to see the stars, but rather into their neighbor's windows. "We're not selling morality here," a telescope salesman said. "We're selling binoculars and telescopes." (The solution to this problem, police officers told people back then, was to close your blinds.)

But, as my wife argued, one privacy issue unique to drones is how they reach into crevices of your home that other technologies cannot.

I contacted Brian Farkas, an associate at Goetz Fitzpatrick, a New York law firm, who has written about drones and privacy, and asked about my legal rights. He explained that in old British common law there is a rule known as "ad coelum et ad inferos," translated roughly as "to the heavens and to hell," which granted people ownership of what was above and below their homes.

Although this rule no longer applies, he said that if a drone were to fly onto your property, you could potentially file a civil complaint against your neighbor. And in some states, drones flying into your window could be considered a criminal action, too.

But as that 2013 Congressional Research Service report noted, it's all still very nebulous. Congress is working on a bill to regulate recreational drones, which is expected to address privacy, including air rights around people's homes.

Until then, some help may be on the horizon for those who don't want to be arrested for shooting down a drone. A group from Michigan Technological University applied for a patent this month for a "drone catcher," which is a specialized drone that can shoot a net (just like Spider-Man) and catch a drone in midair, incapacitating it but not destroying it.

Or you can do what I did, which was to wait about 15 seconds until my neighbor got bored and flew the drone somewhere else.