A well-built Bluetooth speaker with a decent set of features. But should you buy it? 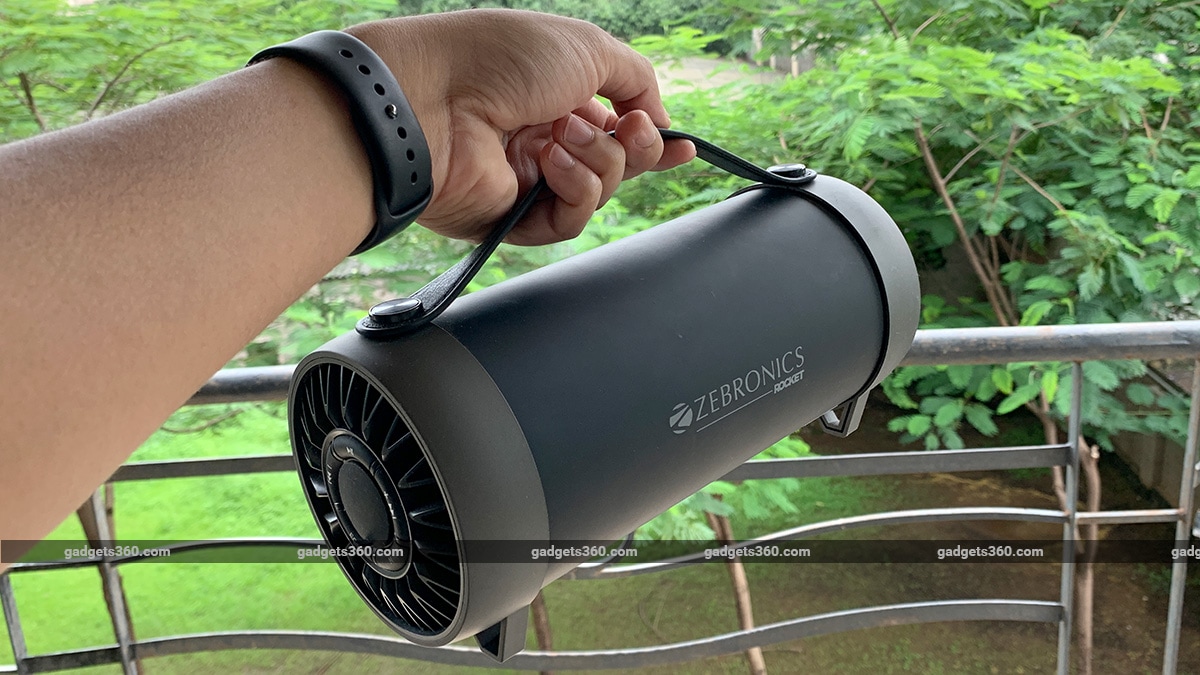 The Zeb-Rocket features built-in FM radio and is priced at Rs. 2,399

The Zeb-Rocket is built entirely of plastic but the quality is good and the finish of the parts doesn't feel crude. The black and grey trim gives it an understated look and it's only available in this one colour. The Zebronics Zeb-Rocket has a cylindrical design, with the two drivers placed on either end. It also has a leather-like rubber handle for carrying it around. The speaker can be placed horizontally or vertically. It's not very large and at 912g, it doesn't feel very heavy.

The Zeb-Rocket has two drivers — a 3-inch and a 1.4-inch driver — placed on either end. The controls and ports are placed on the end with the smaller driver. You have buttons for media playback, equaliser control, and mode selection. The buttons for changing the tracks also double up as volume controls, if you long-press them. A rubber flap covers the On/ Off button, Aux input, USB Type-A port, and Micro-USB charging port.

The two drivers are capable of producing a maximum output of 10W (RMS). The frequency range is little limited at 100 to 16,000Hz, and the signal-to-noise ratio is around 65dB. The Zeb-Rocket uses the older Bluetooth 2.1 standard but Zebronics still claims a range of 8-10m. It's a little weird to see such an old standard still being used, but thankfully, other than consuming more power than the current versions, it doesn't have any effect on the sound quality itself.

The USB port can accept pen drives of up to 32GB and only MP3 audio files are supported. There's no IPXX water resistance and no in-built microphone, so you can't answer calls through the speaker. Finally, the Zeb-Rocket only supports the SBC Bluetooth audio codec.

Setting up the speaker as simple as flipping on the power switch and finding it in your phone's Bluetooth pairing list. The speaker can only be connected to one device at a time. We tested it using an iPhone XR (Review), iPad mini, and MacBook Air. Despite using the older version of Bluetooth, we didn't have any trouble with the range or audio dropping out.

The first thing we noticed is that the Zeb-Rocket gets very loud. With the volume maxed out on the speaker, we found a 30 percent volume on our device comfortable enough when listening to music indoors. Even when we pushed the volume all the way up, we didn't hear any distortion. The 3-inch driver is louder than the other, but this is only noticeable if you have your ear really close to the speaker.

Sound quality, sadly, isn't very impressive. Despite the high volume level, the Zeb-Rocket sounds a bit hollow since the bass is very weak. Even at full volume, there's no audible thump from the low-end frequencies.

In tracks like Lock Doh by Giggs, the sub-bass is pretty much non-existent as the speaker doesn't support that frequency range. The mid-range sounds muddy, which makes it tough to tell different instruments apart. Tracks like Brain Damage by Pink Floyd miss out on a lot of detail, and vocals aren't crisp either. The highs sound okay and don't get sibilant.

All the controls are covered by a rubber flap

The Zeb-Rocket sounds best when placed horizontally. Placing it vertically, even on a tiled floor, muffles the sound a bit. Our experience was a bit better when playing songs directly through a wired connection or through a pen drive, but not by much. We would have liked a microSD card slot instead of or in addition to the USB port, since you can't close the flap when using a pen drive. MP3s are automatically played in random order.

We watched videos on our devices with audio streaming to the Zeb-Rocket too and didn't have any sync issue with dialogue, however, we did have to turn up the volume when watching TV shows as vocals sound soft and lack crispness.

FM radio works decently well. The speaker automatically scans for available stations and you can cycle through them using the volume up and down buttons. You can cycle between different sources using the ‘Mode' button. The EQ or equaliser button is a little pointless as there's no way to tell which preset has been applied, and the audio quality doesn't get any better.

The Zeb-Rocket is rated to last for only 2 hours per charge, but this number is for the maximum volume. The level we typically used didn't go above 40 percent, and with this, we managed to get around 6 hours and 55 minutes of continuous playback time before the battery was completely dead. Our usage involved a mix of Bluetooth streaming and playback through the USB port. Charging the speaker takes around three hours. When the battery is low, the status LED alternates between blue, red and purple. There's also an audible beep, but it's easy to miss this with music playing.

The Zebronics Zeb-Rocket has a very attractive price, and while you do get a lot of playback features, the audio quality is simply not up to the mark. The shape of this speaker's body suggests that it can deliver good bass, but this isn't the case at all. Even the mid-range is lacking in detail, and overall, the audio ends up sounding hollow. FM radio and USB playback are nice additions but not enough to make up for the poor sound quality.

At around the same price, you can find the F&D W19, which offers twice the RMS power of the Zeb-Rocket. If you're looking for something a bit more rugged and weather-resistant, the Boat Stone 700A is a good option to consider for a bit more money.