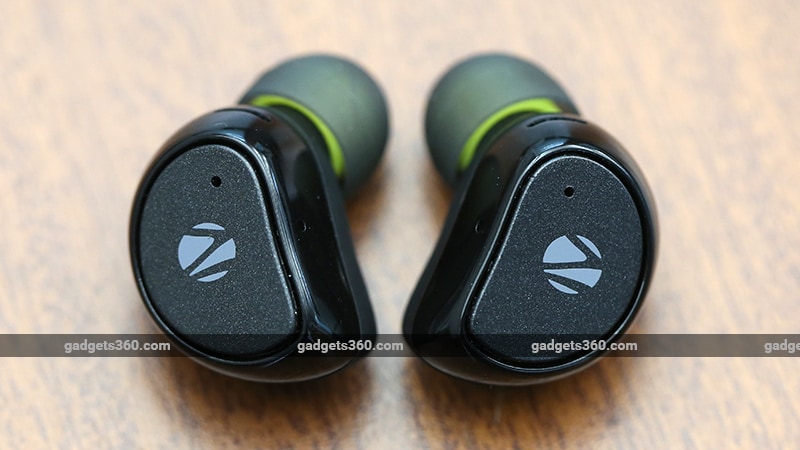 Are Zebronics Zeb-Peace the pair of truly affordable earphones we've been waiting for? Let's find out

Bluetooth headphones have gained in popularity and a lot of us prefer them over the wired variety. They are convenient and obviously a boon if you have a smartphone that lacks a 3.5mm headphone jack. There are different styles of Bluetooth headphones in the market, including collar, over-the-ear, and neckband, among others. Truly wireless is yet another kind that is trending at the moment.

The Zeb-Peace is the in-ear type of truly wireless earphones and each unit is compact in size. These are designed to sit in your ear canals and don't jut out. We found the Zeb-Peace to be lightweight (4.4g each) and fatigue wasn't an issue, even when we wore the pair for long durations.

We liked the two-tone finish on these earphones. The outer shell of each earbud has a glossy finish and a button with the Zebronics logo. On the inside, these earbuds have a soft matte plastic-like finish and two pogo pin connectors that are used for charging.

These earbuds each have an LED on them that alternates between red and blue when in pairing mode. When paired, they blink blue intermittently. These earbuds are described as splash-proof, so you should be able to workout while wearing them.

In the box, you will find two additional pairs of ear tips, a charging case, and a Micro-USB cable. The charging case is short and wide, and has a glossy finish. It has a flap at the top that you open to drop the earbuds in for charging.

At the back, the case has a Micro-USB port that is used to charge its internal battery. On the front, there are five LEDs (three red and two blue) which act as charging indicators for each earbud as well as the case itself.

Each Zeb-Peace earbud has a 6mm driver with an impedance rating of 16 Ohms. Zebronics does not mention the frequency range of the product. These earphones connect using the Bluetooth 4.1 standard and support the HSP, HFP, A2DP, and AVRCP profiles.

The Zeb-Peace earbuds are compact and lightweight

Each earbud needs to be powered on separately with a short press of a button. Once they are powered on, they pair with each other automatically, and this is confirmed with an audio message. You can then search for these earphones from the Bluetooth menu of your smartphone to finish the pairing process.

Once the Zeb-Peace pairs with a smartphone, it plays the same audio message again. Zebronics could have used different audio messages or sounds to reduce the pairing confusion. To switch these earphones off, you need to long-press the button on the left earbud or simply put them back in the case.

These earbuds can also be paired to smartphones individually, but only the left one has a mic, so the right one cannot be used for calls.

To check audio quality, we played some of our favourite tracks using JioSaavn on a Google Pixel 3 (Review). We also played a few FLAC songs but the high-resolution files did not sound significantly different on these earphones.

We used the Zeb-Peace with the medium ear tips that it came with and found the noise isolation to be quite good. These had a good fit and could keep the earbuds in place during our treadmill runs and gym sessions. We found that they were good at blocking ambient noise during our workouts.

These earphones have decent mids, but in our tests the highs sounded shrill and the bass was lacking. In songs that had a lot of bass, we found that the Zeb-Peace could not play sub-bass frequencies properly, resulting in a boomy sound.

Since the mids are strong, we could hear dialogues clearly while watching movies and TV shows. We found that these earphones could get loud, but at higher volumes, the bass was all over the place and the highs were shrill enough to cause fatigue.

Since the Zeb-Peace has a microphone, we could take calls. Only the left earbud worked during calls, delivering mono audio. We weren't impressed with the call quality. Our callers frequently complained of excessive ambient noise, forcing us to switch to using the smartphone directly instead.

We also missed having a volume control on the device, as we often had to reach for our smartphone to change the volume. Double-pressing the button on either earbud summons the AI assistant on the paired smartphone. It called up the Google Assistant in our case, but it failed to pick up audio commands properly in most instances.

The battery life of the Zeb-Peace earbuds was strictly average. The pair could run only for 2 hours and 20 minutes on average at 80 percent volume. You will hear a “battery low” warning message when the battery is about to run out. We found that the left earbud would run out of power first, putting the right earbud in pairing mode. Out of curiosity, we checked how long the right earbud could continue playing music for and it went on for another 25 minutes.

You can simply pop these earbuds back into the charging case to top them up. It took the case around 1 hour and 15 minutes on average to get them from zero to 100 percent. The charging case is capable of topping these earbuds up a little less than four times, totalling a little under 6 non-continuous hours of playback time. When the case runs out of power, you'll need to plug it in for close to three hours to charge it fully.

Verdict
The Zebronics Zeb-Peace is affordable compared to some of the other pairs of truly wireless earphones out in the market. Since these are well designed and light, you'll barely notice them while they are on. We found them to be convenient for use during workouts.

That said, the audio quality is not up to the mark. These earbuds went back into their case the moment our workouts ended. If audio quality is a priority for you, look away, as the Zeb-Peace fails to deliver. You would be better off investing more money in a better-sounding pair. Though none of the budget truly wireless earphones are particularly good — all the good ones are expensive, which makes the Apple AirPods surprisingly good value — you should be able to find something that better suits your purpose, even if you are on a tight budget.