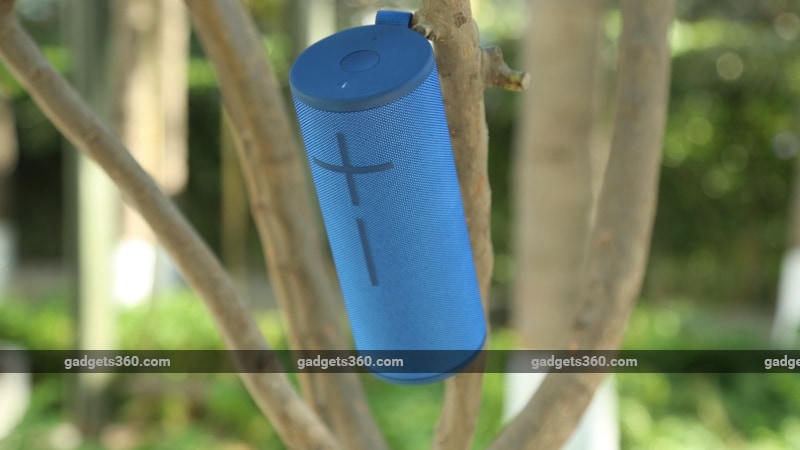 Ultimate Ears has been around for some time now, but got a significant visibility boost when the company was acquired by Logitech in 2008. Founded by renowned sound engineer Jerry Harvey as a manufacturer of custom in-ear monitors, the acquisition has seen the brand move away from its traditional expertise to products that are more mass-market in nature. The result is a brand that now focuses almost exclusively on portable wireless speakers.

The latest product in Ultimate Ears' range is the UE Boom 3. Priced at Rs. 15,995, this speaker is the successor to the Boom 2, which was released in 2015 and has since been a popular option in the high-end wireless speaker category. There are some design and feature improvements here, but the positioning remains largely the same — it's a loud, exciting speaker that can take more than a few splashes of water. Let's review the UE Boom 3.

There are a few significant changes in the way the speaker looks, but the UE Boom 3 largely retains the design and form of its predecessor. The cylindrical shape and fabric-wrapped exterior reminded us of the Boom 2, as did the large rubber volume controls in the shape of ‘plus' and ‘minus' symbols — only the middles of both buttons are actually clickable. However, the speaker is a bit taller than its predecessor when placed upright, and is also a fair bit heavier, although this doesn't make a big difference to the portability of the speaker.

As was the case with the Boom 2, the UE Boom 3 is rated to be ‘waterproof', which is to say it has an IP67 rating. This means that you can immerse the speaker in up to 1m of water for 30 minutes without fearing any damage, assuming you've properly sealed off the Micro-USB port at the bottom with its water-tight flap. Interestingly, the speaker is also shock resistant, rated to survive drops from up to five feet.

The fabric wrap protects the drivers from water and also looks great in our opinion, especially because it changes colour a bit under different levels of light. There are three colour options available in India: black, blue and red, with the blue and red colours looking best in our opinion. Additionally, the rubberised finish at the top and bottom of the speaker looks modern and sophisticated, while giving it decent grip and hand-feel.

While some people might find the lack of buttons and functions disappointing, we were  impressed by the simplicity of the speaker in some ways. The top has three illuminated buttons — one for power, the second for Bluetooth pairing, and the third is a multi-function button for playback and track skipping. A single tap of the button serves to play or pause, while a double tap skips to the next track.

But this is where the positive side of the UE Boom 3's simplicity ends. Apart from the dated Micro-USB charging port, there are a couple of key features missing on the speaker. There is no 3.5mm socket for wired audio connectivity and no microphone for hands-free calling; these are surprising omissions for a speaker that costs Rs. 15,995.

The speaker has two primary drivers and two passive radiators, with a frequency response range of 90-20,000Hz and a 90dB peak output. Disappointingly, there is no high-quality aptX codec support, so users will be limited to streaming using the SBC codec. While the quality of the drivers tends to matter more for wireless speakers, it's still a significant omission for such an expensive product. The sales package of the UE Boom 3 includes a charging cable but no wall adapter.

The UE Boom 3 can only be paired and used with Bluetooth, and there is an app for Android and iOS that improves the usage experience. The app, which just shows up as just ‘Boom' on our home screen, helps control the Boom 3. You can use it to power up the speaker and adjust the volume without touching the device itself, and also adjust equaliser settings, set up wireless daisy chaining, create playlists for compatible apps (Deezer is listed in the app) and set alarms on the speaker. The app also shows the Boom 3's battery level as an exact percentage.

Beyond this, the app also allows for firmware updates for the speaker as and when necessary. Indeed, the app doesn't do anything special, although the ability to switch on the Ultimate Ear Boom 3 remotely is something we found impressive. There is a bit of battery drain due to the active standby required to keep the app-based power switch running, but this isn't a lot. We recorded a drain of 4 percent over a period of 44 hours.

The UE Boom 3 ran for about 13 hours on a full charge, during which we used it at varying volumes. This is decent for a wireless speaker but is particularly good for the Boom 3 given how loud it can get (more on that in the performance section below). You'll be able to use this speaker for long listening sessions between charges. While a Micro-USB port for charging seems dated, it does get the job done and you can always use any wall adapter you have lying around.

For our review, we used an Android smartphone as the source device for the UE Boom 3. We used Apple Music, high-resolution audio tracks played using PowerAmp, and Netflix to test audio performance on the speaker. As mentioned, the UE Boom 3 does not support AptX, so Bluetooth streaming was over the common sub-band codec (SBC).

The shape and driver layout of the UE Boom 3 gives it a wider listening sweet spot than most similar devices, with a primary driver and radiator each on either side of the volume buttons. This also helps it get very loud, which is, in our opinion, the biggest quality of the speaker. What is particularly impressive about the loudness of the Boom 3 is that the sound remains relatively clean even at the highest volumes.

Starting with Tuxedo's So Good, we loved the energy the UE Boom 3 brought to the track. Turning the volume up, the sound was loud, crisp, and calculated, with the catchy beat feeling more exciting than any other time we've listened to this track. It stayed clean throughout, not falling victim to the typical distortion that can be expected from more affordable Bluetooth speakers playing at their maximum volumes. However, this also means that you might need to keep the speaker at a considerable distance from you, depending on how loud it is.

Indeed, when kept a couple of metres away, the sound from the UE Boom 3 was clean and crisp, and felt wider than what we'd expect from a single cylindrical speaker. Moving on, Grandtheft's All The Way Up gave us a better indication of the sonic signature, which is aggressive and tends to favour the low-end. While the highs and mid-range are a bit toned down compared to the lows, the overall sound isn't too bad with most tracks. We noticed that slower tracks that are less ‘busy' are handled better, with the Boom 3 losing its ability to control the mid-range as tracks get faster and busier.

Playing Sunflower by Post Malone, we could once again hear the low-end favoured by the Boom 3, and at times the track felt a bit dull because it isn't as fast-paced as many of the other tracks we listened to on this speaker. This track is also heavily dependent on its vocals. We noticed that the sub-bass was a bit weak, while the mid-bass sounded excellent during our testing. It's this excellent mid-bass that gives the speaker so much character at the low-end, but there is a definite lack of punch in the sound.

Completing our music listening tests with Mountains from the Interstellar soundtrack (a high-resolution FLAC file), we liked the sharpness and clean nature of the sound. Image separation and sonic imaging were strong, thanks to the omni-directional output from the speaker. The level of separation is similar to what we'd expect from a similarly priced stereo setup, which is impressive for the UE Boom 3, to say the least. Separation was most noticeable with instrumentals, and we could distinctly hear different elements of Hans Zimmer's composition.

Finally, we also watched an episode of Brooklyn Nine-Nine on Netflix on our smartphone, with audio playing through the UE Boom 3. Sound was decent enough, and thanks to the excellent separation, we quite enjoyed the experience when the speaker was placed directly behind the smartphone.

Verdict
The UE Boom 3 has some significant shortcomings for a speaker that costs nearly Rs. 16,000. With no microphone, no aux connectivity, no AptX codec support, and Micro-USB charging with no included charging adapter, it almost seems not worth the price. However, the speaker's attractive looks, strong water resistance rating, ability to float, and loud, clean sound are major redeeming factors.

On its most important parameter — sound quality — the UE Boom 3 comes through for the most part. Although the sound isn't ideal thanks to the weak sub-bass, the Boom 3 is loud, crisp, and exciting for the most part. You can also take it pretty much anywhere with very little risk of damage to it.

There are strong competitors in this price range such as the Bose Soundlink Revolve and Marshall Kilburn, which might be more appealing to users looking for a different feature set or approach.

Instagram Testing a Donation Sticker in Stories to Help With Fundraising: Report
Android Q May Replace Back Button With a Gesture, Leaked Software Tips