At Rs. 21,990, this is the most expensive Sony in-ear headset available in India. 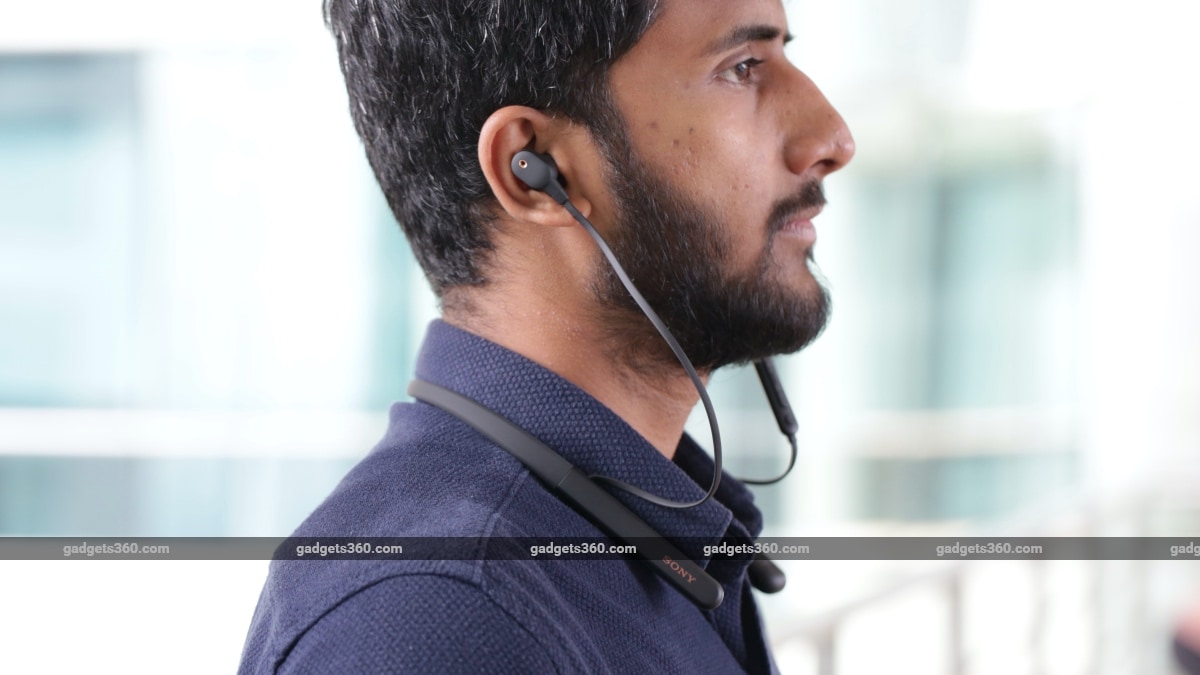 The Sony WI-1000XM2 has active noise cancellation and quick charging

The idea of spending over Rs. 20,000 on a good pair of wireless headphones isn't an alien concept anymore, and some of our favourite picks over the past year have been priced at well over that amount. High-end around-ear headphones, or anything with an Apple logo at a high price, may not raise many eyebrows, but does it make sense to spend big bucks on neckband-style wireless in-ear headphones like this pair? A lot of people may disagree, considering that this design is typically associated with the affordable wireless space.

Sony wants to change your opinion, with the WI-1000XM2 noise cancelling wireless neckband earphones. Priced at Rs. 21,990, these earphones come with all the bells and whistles, including a hybrid dual-driver setup, active noise cancellation, and superior codec support. We put these new high-end earphones through their paces in our review.

The headset has active noise cancellation

We've seen a lot of neckband-style wireless earphones, most of which are affordably priced and look similar to each other. The Sony WI-1000XM2 manages to set itself apart in this segment with design, build quality, and the contents of the sales package. The headset looks good, thanks to a beautiful matte finish. It also has a strong and very flexible neckband, and simplified controls. The large modules at the ends of the neckband hold the battery and audio hardware, but aren't very heavy. There is just one button on the neckband for power, along with a USB Type-C port (covered by a flap) and a 3.5mm socket to connect a stereo cable for wired listening.

Two short cables extend from the neckband towards the earpieces, with an inline remote on the left cable. Apart from controls for volume and playback, there is also a customisable button on the remote which can be set to control the noise cancelling level and ambient sound mode, or invoke Google Assistant or Alexa. There's also a microphone for voice calls and voice assistant interactions. For personalised responses using Alexa, the headphones need to be linked to your Amazon account through the Alexa app. When paired with Apple devices, a double-tap of the middle button invokes Siri.

The earbuds have the same matte texture and finish as the neckband, and have a microphone on each side for the noise cancelling functionality. The earbuds extend far outwards for a snug and comfortable in-canal fit. The short flat cables generated a fair amount of cable noise against our clothing, which interfered with both audio quality and noise cancellation, and this is quite a bothersome thing to have to deal with at this price point.

The sales package of the Sony WI-1000XM2 includes an excellent carry case, a USB Type-C cable for charging, a stereo cable for wired connectivity, an airplane adapter, and a total of seven pairs of ear tips (four pairs of silicone tips, and three pairs of foam tips) in various sizes. We found that the large silicone tips gave us the best fit, but this is an entirely subjective matter. Nonetheless, it's great that there are so many options to choose from here.

Like many other flagship audio products from Sony, the WI-1000XM2 is technically very capable, utilising current-generation hardware and software. The headset uses the company's QN1 noise cancellation processor with dual microphones for its key feature, along with previously seen technologies such as atmospheric pressure optimisation and the company's excellent ambient sound mode. You also get Bluetooth 5, and support for the LDAC, AAC, and SBC codecs. The hybrid dual-driver system features one 9mm dynamic driver and one balanced armature driver in each earpiece, with a frequency response range of 3-40,000Hz.

The Sony WI-1000XM2 can be controlled using the Sony Headphones Connect app, available for Android and iOS. The app lets you set up adaptive sound control (which changes the ambient sound or noise cancellation settings according to your surroundings), adjust the equaliser, and change other key settings on the headset. You can also set up 360 Reality Audio, a Sony-developed format that is said to make music more immersive and detailed. We weren't able to test this feature as no major apps in India support it yet.

Battery life on the Sony WI-1000XM2 is ordinary at best -- we were able to get around 9 hours and 30 minutes of use on a full charge. The headset does support fast charging, and Sony promises 80 minutes of use after 10 minutes of charging. A full charge took us around three hours.

Although the idea of spending over Rs. 20,000 on wireless neckband earphones will make many potential buyers think twice, the Sony WI-1000XM2 has done its part in convincing us about its utility, particularly when it comes to performance. Backed by a hybrid dual-driver setup and superior codec support, the Sony WI-1000XM2 sounds impressive, capably helped along by effective noise cancellation and stable connectivity.

For much of this review, we had the headset paired to a OnePlus 7T Pro (Review) using the LDAC Bluetooth codec, but we also tested the Sony WI-1000XM2 with an Apple iPad mini (2019) using the AAC codec. We found sound to be objectively better when using the LDAC codec, but performance with AAC wasn't too far behind.

Sony's product range names usually indicate how a pair of headphones or earphones are expected to sound -- an Extra Bass product will predictably have more oomph in the low end, while the 1000X-series models deliver a more rounded sonic signature that focuses on detail. The WI-1000XM2 gets this right, with sound that is detailed and rich for wireless earphones.

Many faint details in tracks could be heard clearly, combining well with a luxuriously wide soundstage that gave the music we were listening to a distinct sense of direction and feel. Even within the two channels of the headphones, we were able to hear a unique dimensionality to the sound that we haven't even heard with full-sized pairs of headphones that use larger drivers. This was ably demonstrated when we played The Music by Marcus Marr, a busy and spacious track that had all of its detail capably revealed by the WI-1000XM2 earphones.

The headset is charged through its USB Type-C port

The kind of aggression and punch you'd expect to hear on an XB-series headset is naturally not present, but it's adequately made up for with a sonic signature that favours frequencies across the range. That said, there is a fair amount of attack and drive in the sound across the range, which we found to be sharp, focused, and rich. Listening to Feels Like Summer by Childish Gambino, we could feel the crispness in Donald Glover's vocals, even as the bass rumbled along gently and the highs sparkled.

Much of this quality across the frequency range can be credited to the hybrid dual-driver setup and excellent tuning of the drivers themselves. The typical benefits of a dual-driver setup are easily audible, with the low-end sounding defined and tight thanks to the fact that the dynamic drivers are dedicated to getting that right.

The balanced armature drivers do a good job as well, but the mids and highs weren't quite as tight and crisp as the lows. Listening to a high-resolution version of Gotye's State Of The Art had us finding just a bit more drive in the bass hits and low-end instruments, but this didn't negatively impact the mids and highs, or even the overall detail and imaging of the Sony WI-1000XM2.

Looking past audio performance, we come to noise cancellation with the Sony WI-1000XM2. Although not as good as on the Sony WH-1000XM3 or Bose Noise Cancelling Headphones 700, the Sony WI-1000XM2 does a decent job of cutting out background sound. Like the AirPods Pro, it's quite effective given the in-ear design, but the experience largely depended on us selecting the ideal ear tips for us and getting a good fit.

Sounds such as the hum of air conditioning, traffic, and chatter in crowded places, were silenced to a good extent and could only be heard faintly if we really tried to listen. Other sounds such as people near us speaking were softened sufficiently. This also improved our experience listening to music, by reducing any distractions. However, we did experience some cable noise, which negatively affected the overall experience when moving around a lot.

The ambient sound mode is adjustable and worked well for us at around the medium level, but turning it all the way up to 20 through the app made things around us unnaturally loud and amplified; even the faintest sounds, to excessive levels. We also tested the Sony WI-1000XM2 as a hands-free headset for voice calls, and were happy with its performance. We had no issues with voice quality on both ends of the call.

The sales package is quite well equipped

Although we started out with the notion that the Sony WI-1000XM2 is perhaps a bit too expensive given its design and form factor, these earphones have managed to impress us. Like many of Sony's flagship audio products, this headset is technologically capable, sounds good, and does a decent job with active noise cancellation. There are small issues such as cable noise and average battery life, but our experience with the headset was positive on the whole.

This is among the best pairs of wireless neckband-style earphones you can buy right now, but if you do have over Rs. 20,000 to spend, we'd think it wiser to invest in a pair of fully-featured, over-ear headphones such as the Sony WH-1000XM3. It's really only if you fall into a niche where the specific benefits of this form factor are what you seek, then the Sony WI-1000XM2 is definitely worth auditioning.

On the other hand, similar priced options such as the RHA T20 Wireless might also be worth checking out for a more audiophile-friendly sound. You could also consider a good pair of true wireless earphones such as the Apple AirPods Pro or Sennheiser Momentum True Wireless, which have a more convenient form factor.

Microsoft CEO Satya Nadella Voices Concern Over CAA
Realme 5i vs Redmi Note 8: Which of These Popular Smartphones Should You Buy?