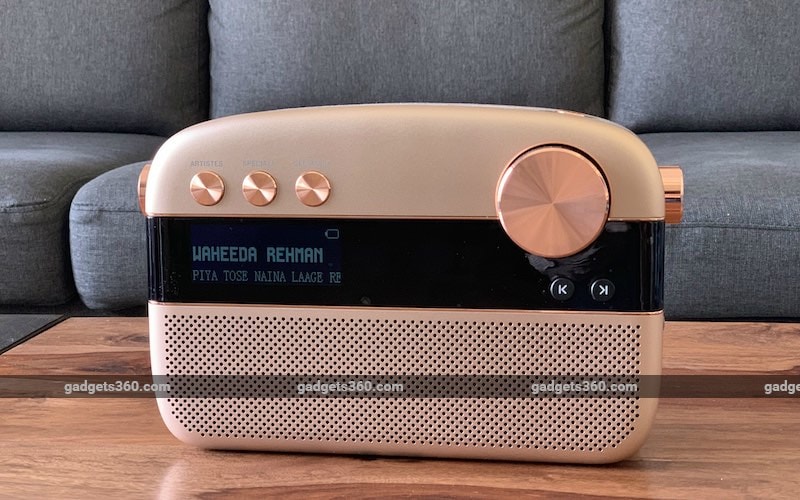 Everywhere you look, it seems that technology has taken over our lives in one form or another. From smart refrigerators and TVs to voice assistants that are always listening, it can all get a bit overwhelming at times. It's no surprise then that people are exploring ways to a break from technology, be it in the form of a digital detox, or simply by embracing gadgets that don't overcomplicate things and represent a throwback to “simpler times” that many seem to remember fondly.

Saregama knows a bit about nostalgia, being the company behind HMV, the music label that released most of the music recorded in the country for a large part of the 20th century. While rival T-Series — which, incidentally was the first to challenge HMV's domination in the 1980s, but this is not the time or place for a history lesson — is now a well-known name on the Internet, Saregama was rather slow to adapt to the digital age, much like it was slow to adapt to change in the 80s, but we've got to stop looking back, really!

That was until 2017, when the company released the first Saregama Carvaan, a music player that looked a lot like radios from a bygone era. Though it offered USB playback, Bluetooth connectivity, and FM radio — features you'd expect from modern devices — its USP was the preloaded collection of Hindi songs across various genres, that you could play with the turn of a dial.

No streaming, no searching, and no customised playlists — just 5,000 preloaded classic songs organised into stations based on artistes and genres for you to choose from and play in a loop; like radio, minus the annoying ads and RJs, with some ability to influence what you are listening to. The Carvaan offers simplicity and ease of use to the technophobe, while still being functional enough to be a cool, no frills, “retro” media player to everybody else.

We were quite impressed with the original Saregama Carvaan, including its concept as well as the simplicity of its design and execution. It was clearly not a product aimed at audiophiles, so it was no surprise then that it fell a little bit short in terms of overall audio quality, not least because most of the source material is decades old so there are unlikely to be high quality masters lying around to begin with.

While the Carvaan was largely well received — the company recently announced it has clocked over 1 million in unit sales — and the second half of 2018 saw the company launch multiple variants, including the Carvaan Premium, which aimed to address some of the feedback it had received about the original Carvaan.

The Carvaan Premium added AM radio support (in addition to FM already present on the original), an Aux-in port (offering an additional connectivity option apart from Bluetooth), and over 50 new stations dedicated to actors and actresses, apart from the 80+ stations dedicated to singers, lyricists, and music composers, which shipped with the original.

Perhaps most importantly, the Saregama Carvaan Premium added support for a companion app, which lets you browse through the songs and stations on your device. Now that might seem like a counterintuitive idea for a device that's designed to declutter your digital life, but as we noted with the original Carvaan, there are times when you want to listen to a particular song that you know is on the device, and don't want to fiddle with a bunch of knobs and buttons just to get to it.

The Carvaan Gold released a month after the Carvaan Premium with a couple of key differences, most notably a focus on audio quality, addressing one of our criticisms of the original Carvaan. It ditched the Micro-USB port for a proprietary charger, which means you need to remember to carry the charger with you if you plan to lug it around when you travel.

Of course the size (28.9cm x 22.6cm x 8.4cm) and weight (1.94kg) of the Carvaan Gold don't exactly lend themselves to portability other than moving it around the home, so that's unlikely to bother most people. However, you will need to go back to Saregama to buy a new charger if something happens to the one it ships with, which isn't ideal.

The basic functionality of the Saregama Carvaan Gold is the same as that of the Carvaan and Carvaan Premium. There's a power button and four buttons on the left side used to change the playback mode — Bluetooth, FM/ AM, USB/ Aux-In, and Saregama. The first three are self-explanatory, while the latter is the one at the core of the device.

When in Saregama mode, you can use the three buttons at the front to start playing different preloaded stations. The first one is Artistes, which features stations based on music composers, lyricists, singers, and even actors. It's the easiest way to spend a few hours listening to songs featuring Dev Anand or the best of RD Burman, among various other artistes.

A giant dial at the top right lets you switch from one artiste to another, while skip/ back buttons located right below it can be used to go back and forth within the same stations. Playback of songs in these stations is always randomised — so it's unlikely to start with the same song when you choose it the next time. Stations will also always keep repeating in a loop, which means the music never stops playing, though, obviously, it starts to get a bit repetitive after a while.

The second button, Specials, features some interesting stations such as Songs with Dialogues, Classical Instrumental songs, Duet Hits, songs featuring the Kapoor family, among others, as well as genres like Romance. The third button, Geetmala, is strictly for those who grew up listening to the voice of Ameen Sayani, featuring old broadcasts of Binaca Geetmala, arguably the subcontinent's most famous radio show and perhaps the closest thing India has had to Billboard's Hot 100, complete with Sayani's anecdotes that endeared him to countless listeners.

There's a volume dial on the right, and the back features a reset button, the charging port, a USB port, and an Aux-in port. Bundled in the box is an antenna that folds out like those old-fashioned radio antennas, which can be plugged in to the Aux-in port to improve reception, if necessary. The USB port can be used to plug in drives for playback, or simply to recharge your phone using the device's built-in battery.

The device's battery is rated at 5 hours, but our experience was much better. At 20 percent volume — which we found to be sufficiently loud to comfortably listen to music even in a large room — and in the Saregama mode playing built-in music on a loop, the battery on the Saregama Carvaan lasted an incredible 14 hours. Obviously, if you listen to music at higher volumes or if you use Bluetooth functionality, your experience will likely be different.

All Carvaan units now ship with a remote, so all functionality is accessible at the tap of a button even if you aren't right next to the unit, except for toggling it on or off, which must be done via the mechanical power button. The companion app — which connects to your Carvaan Premium or Carvaan Gold over Bluetooth and does not require an Internet connection to work — lets you search through the catalog of songs on your Carvaan Premium or Gold and even lets you build customised playlists. We had to create a Saregama account — which was annoying — but other than that, we found that the app worked as you would expect.

Everything described so far is available on the Carvaan Premium as well, so what is it that sets the Carvaan Gold apart? First up, the fact that it has a metallic body (instead of plastic) and is available in Rose Gold and Champagne Gold finishes. We quite liked the Rose Gold unit we received for testing, though while the overall fit and finish felt solid, it didn't necessarily feel premium.

Apart from its metallic body, what sets this variant of the Saregama Carvaan apart from the more affordable models are the Harman Kardon-certified speakers inside. There are five speakers located behind the metallic mesh up front, which are rated at 2W RMS each.

The device does not support any high-quality Bluetooth audio codecs such as aptX and aptX HD. However, that is not surprising considering the intended audience for this device. The sound on offer via Bluetooth is clear and crisp, but lacks warmth and detail. Similarly priced dedicated Bluetooth speakers such as the Bose Soundlink Mini II and Harman Kardon's own Onyx Studio 4 deliver much superior sound, but, obviously, you are paying for more than just the speaker here.

Mids are very expressive, and stand out in the sound mix. The highs are also clear and crisp, and there is no sibilance as such to speak of. As a result, vocals, which register mostly in the upper mids, sound excellent. The lows are where things go downhill.

Bass is weak, hollow, and lacks punch. Sub-bass in particular is almost non-existent. Of course, this system is not built for blasting EDM at full volume, but even the 60s- and 70s-era Hindi tracks that come preloaded sound hollow because of the weak sub-bass. Instrument separation is also quite weak, with multi-layered tracks sounding very muddled.

We played songs through the auxiliary input using our Fiio M3K high-res audio player as the source device. As expected, clarity and detail were noticeably better than what we experienced over a Bluetooth connection. The quality was noticeably better for songs played via a USB drive as well. Of course, the sound you hear depends greatly on the quality of the source material as well.

The Carvaan is a unique range of products that we love, and while the Premium should probably be most people's choice, the ‘regular' variant is worth considering as well if you are on a tighter budget. If you want to look beyond Hindi music, there are variants for Tamil, Bengali, and Marathi songs as well, with a range of more affordable Carvaan Mini offerings also up for purchase. The Carvaan Gold is only for those for whom the budget is truly no bar.

Realme Buds, Mi Earphones, or Others: Which Are the Best Headphones Under Rs. 1,000?
iPhone XR Successor Last to Sport LCD Display, 2020 iPhone Models to Switch to OLED: Report