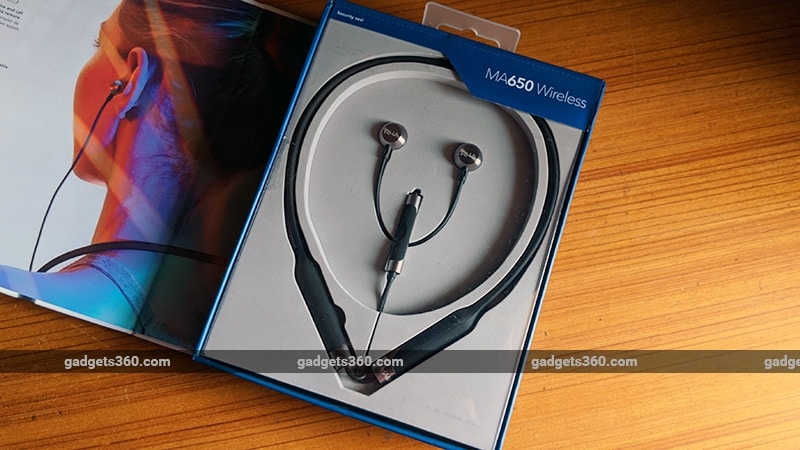 RHA is a little-known audio brand in India right now, but one you should definitely be aware of. With a primary focus on in-ear headphones, this tiny Scottish company is slowly expanding its demographic from audiophiles to a broader audience with its new wireless products. The MA series currently consists of two models, the MA650 and MA750, both of which were officially been launched in India a couple of months ago.

We have the MA650 in for review today. It's priced at Rs. 7,999, and the main difference between this and the MA750 is its drivers, which are all custom made by RHA. Let's see if this good-looking pair of headphones can deliver comfort and quality.

The MA650 is a premium pair of wireless headphones, and it shows right from the packaging. In the box, you get a USB Type-C charging cable, a mesh carry pouch, and a selection of eight single-flanged and double-flanged pairs of ear tips and a single pair of Comply foam tips. The quality of the silicone ear tips is very good, and their slightly rigid texture offers a good seal from ambient noise.

The MA650 is a neckband-style wireless headset, which means it rests around your neck when you wear it. The entire band is covered with silicone, which feels comfortable against your skin even for long durations. It's light too, at just 33g, and the body can be bent and contoured easily for when you need to store it in the pouch. It's sweat- and splash-resistant thanks to the IPX4 certification, so it can be used for workouts.

The neckband terminates into cylindrical bulges on each side. The left side has the NFC chip, while on the right, we have a USB Type-C charging port, power button, status LED, and a built-in vibration motor for alerts. We love RHA's attention to detail here, like the aluminium inserts on the edges of the neckband that complement the earbuds and in-line remote nicely. The remote sports a microphone and three buttons for play/ pause and adjusting the volume. Double- or triple-pressing the play/ pause button lets you skip a track or go to the previous one. A long-press activates whichever virtual assistant you have on your phone. The earbuds themselves are made of 6000 series aluminium, which makes them very sturdy, and they look good too. The backs of the earbuds are magnetic and attach to one another so they don't dangle about when you're not wearing them.

The headphones use RHA's custom model 380.1 drivers, with a frequency response of 16Hz-22,000Hz. The RHA MA650 supports codecs like AAC, aptX, and the standard SBC. According to a frequency response graph published by RHA, the MA650 is tuned for better upper-mid-range performance and bass, whereas the highs are toned down a bit. This is another way it differs from its more expensive sibling, the MA750, which is tuned to deliver equal performance across the entire frequency range.

We used the MA650 for a few weeks as our primary pair of headphones and absolutely loved how portable it is. We miss the convenience of retractable earbuds like the ones on LG's Tone Active+ but the magnetic design served the purpose of keeping them from getting in the way. It would have been nice if the music paused automatically when the earbuds attached to each other, like with the Jabra Rox.

We found that the silicone ear tips worked very well in drowning out ambient noise, so much so that we didn't feel the need to use the bundled foam tips. The earbuds have a snug fit and don't stick out from your ears too much, making them quite inconspicuous. However, there is a bit of audio leakage, which is noticeable in quiet places. If you're planning on wearing them while at work in an office, you might want to switch to the foam tips. We didn't like the silly label with all the regulatory and trademark information that's attached to left earbud's cord, as it looks out of place. This could have been printed somewhere on the neckband instead.

The MA650 is mighty durable as even after a couple of weeks of rough usage, it still felt as good as new. The cords for the earbuds are secured firmly and didn't feel like they would get loose, and the rubber lining managed to cope with our humid climate as well.

Setting up the RHA MA650 is also very easy as you have voice prompts to guide you. The in-line remote works well, but the buttons aren't raised very much and we often found ourselves struggling to distinguish them by touch, because of the design of the rubber lining. The microphone does a very good job with voice calls, and none of the people we spoke with had any trouble hearing us.

Audio reproduction is balanced and crisp, with very good mid-range performance. Thanks to the way in which the MA650 is tuned, we never found the highs too piercing. This works well for pop tracks such as Maroon 5's What Lovers Do, which was well balanced with just the right helping of bass and plenty of detail in the mid-range frequencies. Even at high volume levels, Adam Levine's Falsetto never felt shrill. Another track in which the mid-range really shone, with good instrument separation, was Born to Touch Your Feelings by The Scorpions. Vocals were distinct and the overall sonic signature was warm and pleasing.

The MA650 isn't for bass-heads though. Although the bass is tight, it lacks serious thump, which is evident in tracks like I Feel It Coming by The Weeknd. This isn't a complaint since that's just the way the headphones are tuned, and personally, we'd take a bit more mid-range detail over bass enhancement any day. This is highly subjective and might not suit everyone's taste. We tested the headphones primarily with Apple Music on an iPhone 6s Plus (Review), but also tried it with a mix of FLAC files played on a Google Pixel 2 (Review), using aptX. With the latter, we felt the soundstage to be a bit wider.

The MA650 is rated to deliver 12 hours of battery life, and during our review, we actually managed to surpass this. With a mix of calls and music, we were able to achieve 13 hours and 43 minutes of runtime. You can check the battery level at any time by pressing the power button (even during music playback). To save power, the MA650 automatically shuts itself off after 20 minutes of inactivity. When the battery level drops below 20 percent, you'll hear warning voice prompts every few minutes. The white LED also changes to red. Charging the headphones fully from zero percent took us just under two hours, through the USB port of a MacBook Air.

It's hard to find any fault with the RHA MA650. It strikes a very good balance between premium features, performance, and price. Our only criticism would have to be that the buttons on the in-line remote aren't the easiest to use by touch. Other than that, this might just be the only neckband headset you should even consider in this price range. The MA650 a little expensive but considering it's retailing for slightly less in India than in the UK, it's not a bad deal. You can find it online through Headphonezone, and at select Croma and Apple resellers offline.

We recommend the RHA MA650 for anyone looking for a feature-rich pair of wireless headphones that delivers a good balance of audio performance and battery life at less than Rs. 10,000.