Are these the best affordable true wireless earphones you can buy? 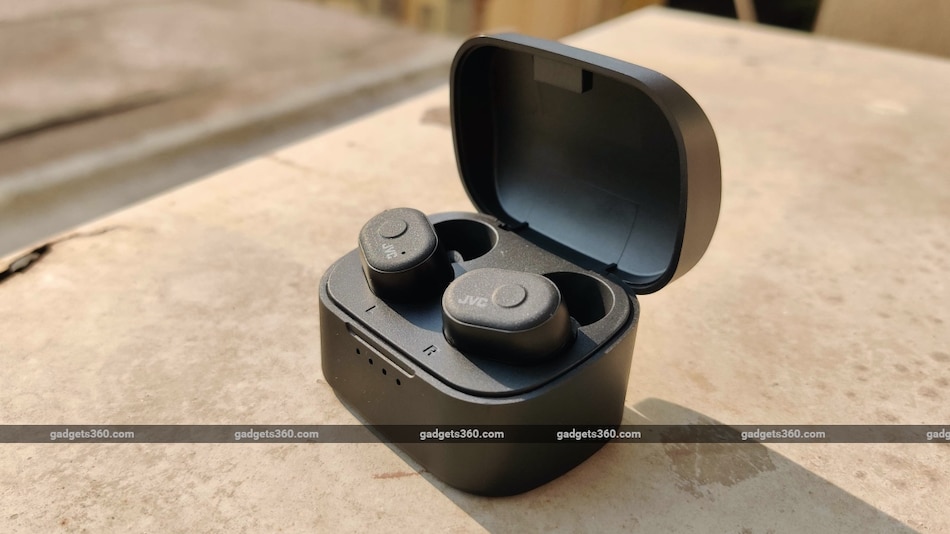 Better known for car and home audio products, the JVC brand is used for a few other product lines in India, including televisions, earphones, and headphones. The company recently launched a new range of wired and wireless audio products in India, with prices ranging from Rs. 799 to Rs. 9,999. The new range includes the JVC HA-A10T, a relatively affordable pair of true wireless earphones.

The earphones are light, and you get multiple foam and silicone tips to choose from

We're used to seeing fancy styling and premium materials used in higher-priced true wireless earphones, but the budget segment typically sees functional, basic design. That said, JVC has done a good job in keeping the HA-A10T earphones looking good despite the limitations of their price; the earphones are entirely plastic, but feel well put together and solid. They aren't very large either, and are light enough to stay in your ears anchored only by the ear tips.

Pressing the buttons requires some force - and usually a three-finger grip on the earphone - and isn't as easy as having touch controls. However, the buttons work well and the effort needed meant we were less likely to hit them accidentally or trigger the wrong function. A small dull indicator light on each earphone shows when they are charging, and the status of the connection. The headset uses Bluetooth 5 for connectivity, and supports only the SBC Bluetooth codec.

The earphones are IPX5-rated for water resistance, and will safely be able to handle sweat or a few drops of water.

Included in the sales package are five pairs of ear tips - three are silicone, while two are foam. We quite like foam ear tips in general for the more secure fit and better noise isolation that they offer, but a lot of people prefer silicone which feels less ‘sticky'. That said, the foam tips that come with the JVC HA-A10T offered us a very tight, incredibly noise isolating fit that helped improve sound quality as well as comfort.

The case matches the colour of the earphones for all variants, and is as functional and austere as them. There are four battery indicator lights at the front, a Micro-USB port at the back for charging, and a lid that stays shut magnetically when closed. The case is a bit larger than what we're used to seeing in the segment, and isn't very pocketable.

The JVC HA-A10T true wireless earphones have a claimed battery life of four hours on the earphones and an additional ten hours for the case (two-and-a-half additional charges of the earphones) for a total of 14 hours per charge cycle. We were able to match this claim; this isn't exceptional for the segment, but is decent enough.

The large charging is not easily pocketable

Many of the affordable pairs of true wireless earphones we've reviewed are packed with features, and they might get the form factor and functionality right, but they don't usually offer the same level of sound quality as mid-range or premium offerings. The HA-A10T sounds great though; significantly better than anything else at this price, and even some options that cost twice as much.

We used the earphones with a OnePlus 7T Pro (Review) for the review, listening to music across streaming services and our high resolution audio collection, watching videos, and taking voice calls through a typical working day. The JVC HA-A10T earphones only support the SBC Bluetooth codec, but this didn't seem to hold sound quality back at all.

Starting with Baba O'Riley by The Who, the quality on offer here was immediately evident. The sound was crisp, clear, detailed, and incredibly engaging from the get-go, gaining more character and drive when the drums and Roger Daltrey's vocals kicked in. Instrument separation was particularly impressive on the JVC HA-A10T, with every element of this timeless rock classic feeling distinct and refreshingly clear. The soundstage was equally impressive, with the earphones working hard to give each element a strong sense of direction.

Moving on to another classic from a different genre, we listened to Right Here Right Now by Fatboy Slim, which once more highlighted the level of detail and depth the JVC HA-A10T can achieve. Some of the fainter elements in the track were crisp and present, despite its bass-heavy main hook.

The sonic signature of the HA-A10T is incredibly neutral, giving enough leeway to the mid-range and highs while keeping the aggressive, tight bass that many listeners prefer. This was particularly audible in one of our favourite high-resolution test tracks, 9000 Miles by Pendulum. This aggressive drum-and-bass track allowed the lows to take the lead, without overpowering any other frequency across the range. The result was a sound that was aggressive, punchy, and driven, while simultaneously offering the most detailed insight into this track that we've heard with any true wireless earphones priced under Rs. 10,000.

In Love Is Gone by Netsky, we heard the first real flaw in the sound that we had loved so far. With busy tracks such as this, the earphones weren't able to keep up with too many different, fast-paced elements. This is where we missed the presence of better Bluetooth codecs, but the JVC HA-A10T true wireless earphones still do an impressive job with all but the busiest tracks despite the technical limitations.

The JVC HA-A10T is capable of handling voice calls, but it's far from good at this. Sound on voice calls was far too soft, and the presence of just one microphone meant that we needed to be in the quietest of environments to be heard by the caller. At home and in the office, this wasn't a problem, but outdoors, it was hard to hear or be heard with the earphones.

There's a physical button on each earbud for controls

Despite its limitations, the JVC HA-A10T is an incredible pair of true wireless earphones for Rs. 3,999. This is the best sounding pair of earphones we've heard at this price by a long shot, and puts options at twice the price to shame. We would, without a doubt, recommend this headset to anyone looking for an affordable pair of true wireless earphones, thanks to its detailed sound and adaptive sonic signature.

The earphones aren't without their problems, as would be expected on any affordable headset. Micro-USB charging, the inability to keep up with the busiest of tracks, and poor performance on voice calls means that the JVC HA-A10T isn't perfect even at this price. However, if sound quality and comfort are your most important criteria, there's nothing better than the JVC HA-A10T at this price today.

Government is Making a COVID-19 Tracker App for Android, iOS: Report
Facebook, Google May Lose Over $44 Billion in Ad Revenue in 2020 Thanks to Coronavirus: Report