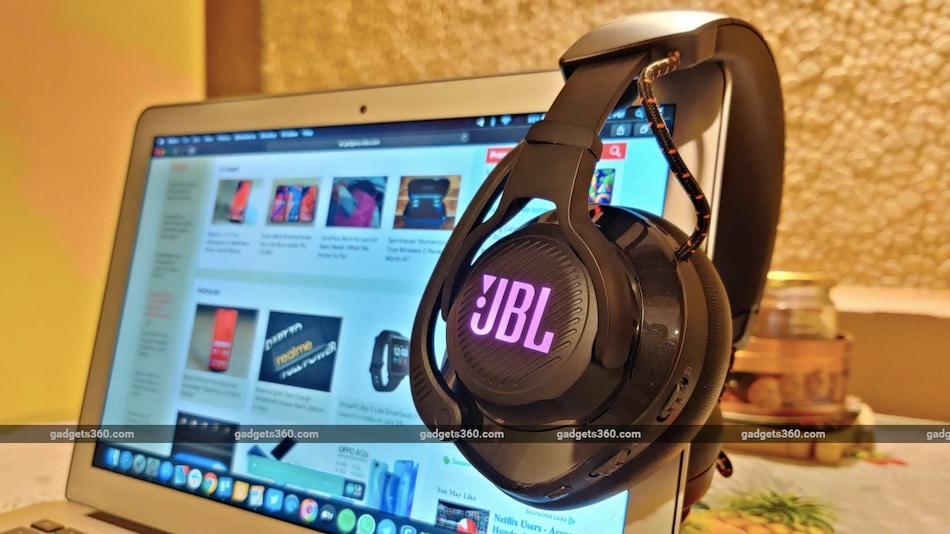 JBL's range of audio products is incredibly diverse, spanning everything from affordable portable speakers such as the JBL Go 2 to extremely high-end audiophile-grade loudspeakers such as the JBL Project Everest series, which can cost up to Rs. 1 crore. In between these two extremes falls everything you can think of in the field of personal audio, including the company's latest headphone range designed specifically for gaming.

Priced between Rs. 2,499 and Rs. 22,999, the JBL Quantum range offers various designs, functions, and connectivity options, all focused around improving the gaming audio experience. Today, we're reviewing the JBL Quantum 600, which sits roughly in the middle of the range and is priced at Rs. 12,999. This over-ear gaming headset offers both wired and wireless connectivity, and is tuned for in-game audio and voice chat. Find out just how these new gaming headphones work in our review.

Lighting effects on the JBL Quantum 600

Gaming headphones are usually as much about style and oomph as about performance, and the JBL Quantum 600 doesn't disappoint. The over-ear headphones are large and almost entirely plastic, but look modern and edgy like no ordinary headphones in the sub-Rs. 15,000 price segment. Thick fabric cords connect the two channels, and the headset is flexible and adjustable for a comfortable fit.

The outer sides of the ear cups have large JBL logos, which are illuminated with RGB LEDs. The lights are on by default when the headphones are switched on, and the colours and patterns can be customised using the JBL QuantumEngine app (available only for Windows here), which also lets you adjust equaliser settings.

While it is possible to use the JBL Quantum 600 without this software, setting up the Quantum Surround feature or DTS tuning on the headphones requires it. Without it, you'll have to rely on the default tuning of the headset, and you won't have access to any of the additional tuning and adjustable equaliser settings.

The default lighting effect cycles through various colours and patterns, and it looked quite impressive to us. There are additional indicator lights at the bottom of each ear cup that show the headset's power status and battery level, and a microphone status light on the flip-up boom. When raised, the microphone is switched off, and pulling it down and into place turns it on. This was a quick and convenient way to use the microphone, and I quite liked it. The microphone stalk is flexible, and can be adjusted to properly capture your voice.

The JBL Quantum 600 is comfortable, thanks to thick foam padding around the ear cups and on the underside of the headband. This also ensures good passive noise isolation, but did make it a bit warm for my ears over long periods of use. The right side has the power switch, while the left side has the USB Type-C port and 3.5mm jack, a button to electronically mute the microphone, and two dials for volume control and balancing the audio mix.

The audio mix balancer is an interesting option, since this lets you adjust the tuning depending on whether you want the headphones to focus on game audio or voice communication, or decide your own balance between the two. If you're using the headphones with a computer, you can also change this through the audio settings.

Connect the JBL Quantum 600 wirelessly, or with a 3.5mm cable

When ‘wireless connectivity' is mentioned on a pair of headphones, it's usually assumed to be Bluetooth. However, Bluetooth has its weaknesses for gaming, primarily when it comes to latency. The typical delay in sound transmission can mean the difference between in-game life and death, so Bluetooth is usually avoided in favour of wired connections on gaming headphones. The JBL Quantum 600 does have a detachable 3.5mm cable for traditional wired connectivity, but the use of proprietary 2.4GHz wireless connectivity adds some utility for gaming while avoiding the latency issues of Bluetooth technology.

Of course, one big weakness of a non-standard wireless audio solution is that it needs a dongle or receiver, which has to be physically connected to the source device. The JBL Quantum 600 comes with a thumb drive-sized USB Type-A dongle, which can be connected to a PC, Playstation 4, Mac, or VR unit. Other platforms, including Xbox, Nintendo Switch, mobile (Android and iOS), and older Playstation devices will have to rely on 3.5mm wired connectivity, which you can of course choose to use on the wireless supported platforms as well.

The dongle is small, and plugs in to a USB Type-A port on supported devices

On supported platforms, the dongle connects wirelessly with the headset after setting up your source device to output audio through USB. On my MacBook Air, I was additionally able to set the audio output to either Game or Chat mode, which optimised the sound for each specific purpose. The dongle has an indicator light that stays static when the headset is connected, and a connect button to connect to the headphones if needed. However, I didn't ever have to use the button, as the headphones automatically connected to the dongle without any trouble every time.

The JBL Quantum 600 has a frequency response range of 20-20,000Hz, and is powered by 50mm dynamic drivers. In the box is the headset, USB dongle for wireless connectivity, a 3.5mm headphone cable, and a USB Type-C cable to charge the headphones. The USB Type-C port on the headset is only for charging, and does not support direct USB connectivity with a source device.

I was able to use the headset for around 10 hours on a single charge with mixed usage and the RGB lighting on, including music, gaming, watching videos, and conference calls on the computer. This isn't a particularly good figure, but since these are largely meant for home use and can be plugged in and used without power, it's acceptable.

Most headphones that we review are judged largely on their abilities with music, but I naturally had to change things up a bit for the JBL Quantum 600. I largely used the headphones wirelessly with a MacBook Air as an all-purpose headset for playing games, listening to music, having conversations on conference calls, and watching videos. I also used it with an iPad for gaming.

The sonic signature is expectedly tuned for detail, voice quality, and directional sense which matter in many games, but the JBL Quantum 600 did sound decent enough when listening to music as well. The default tuning of the sound is its only real weakness, although this can be adjusted using the equaliser settings. That said, the excellent detail and wide, luxurious soundstage did make occasional music listening enjoyable on the JBL Quantum 600.

This naturally also made for a great experience when playing games, particularly when the audio balance is set to focus on game sounds. Playing Spyder on Apple Arcade on the MacBook Air was quite enjoyable from the audio perspective, as the JBL Quantum 600 managed to keep the sound lively and cohesive, while allowing for ample detail and faint sound effects to be heard clearly. What was most impressive, and what makes this headset well suited for gaming, is its ability to simulate direction despite being limited to two stereo channels.

Battery life is average on the JBL Quantum 600, with the headphones running for around 10 hours on a charge

With Spyder, as well as with other games on the computer that can leverage a sense of directional sound for effective gameplay such as Modern Combat 5 on the iPad, this focused tuning helped get the sound right for gaming. The detail is particularly useful here, as it lets the JBL Quantum 600 properly reproduce many of the faint background sounds in games, as well as place the focus on core gameplay elements such as speech, footsteps, and weapon sounds.

Playing the popular PUBG Mobile on an Android smartphone with the headphones plugged in, the only real complaint I had was that the sound was a bit soft even at the highest volume. In a quiet room, this wasn't a problem, and I could hear both game audio and voice chat clearly enough. The directional tuning was on point, as was detail and the spaciousness of the sound which gave me a decent feel of the game. I won the first round of PUBG Mobile that I played wearing the JBL Quantum 600, with much credit going to being able to accurately sense where enemies were based on the sounds of gunfire and footsteps.

I also tested the JBL Quantum 600 headphones for voice communication on my MacBook Air, using it for numerous conference calls on Zoom, Google Meet, Cisco Webex, and other platforms. When set to the Chat configuration and with the audio mix balancer set all the way to Chat, voices were loud, clear, and very easy to discern. The spaciousness of the sound took some of the usual edge and shrillness out of conference calls even at the highest volumes.

The microphone is quite well suited for voice capture as well, and the flip functionality made it convenient to quickly activate and deactivate the microphone as needed. All this makes the JBL Quantum 600 well suited for voice chats in various circumstances, and the ability to set the balance between chat and game audio ensures that you can optimise the sound to your needs.

The audio mix balancer lets you choose how you want to tune the sound; you can have it favour in-game audio or chat, or set the right mix between the two

While most headphones are tuned for music, gaming requires very specific tuning, design, features, and connectivity options to be effective. With the Quantum 600, JBL has gotten much of this right. The sound is well tuned for gaming, but entirely adequate for a number of purposes including listening to music, voice chat, and more.

Wireless connectivity that is stable and free of any noticeable latency or sound quality issues is a big bonus as well, making this headset well suited for gamers who want to go cord-free. Battery life is the only area where the JBL Quantum 600 falls a bit short.

At Rs. 12,999, the JBL Quantum 600 is very well priced for what's on offer, and its good design and RGB lighting are gamer-specific additions that I quite liked. Even if you're just an occasional or mobile gamer, the JBL Quantum 600 is a flexible headset that works across multiple device platforms for various purposes, and is worth considering for everyday use with a computer.