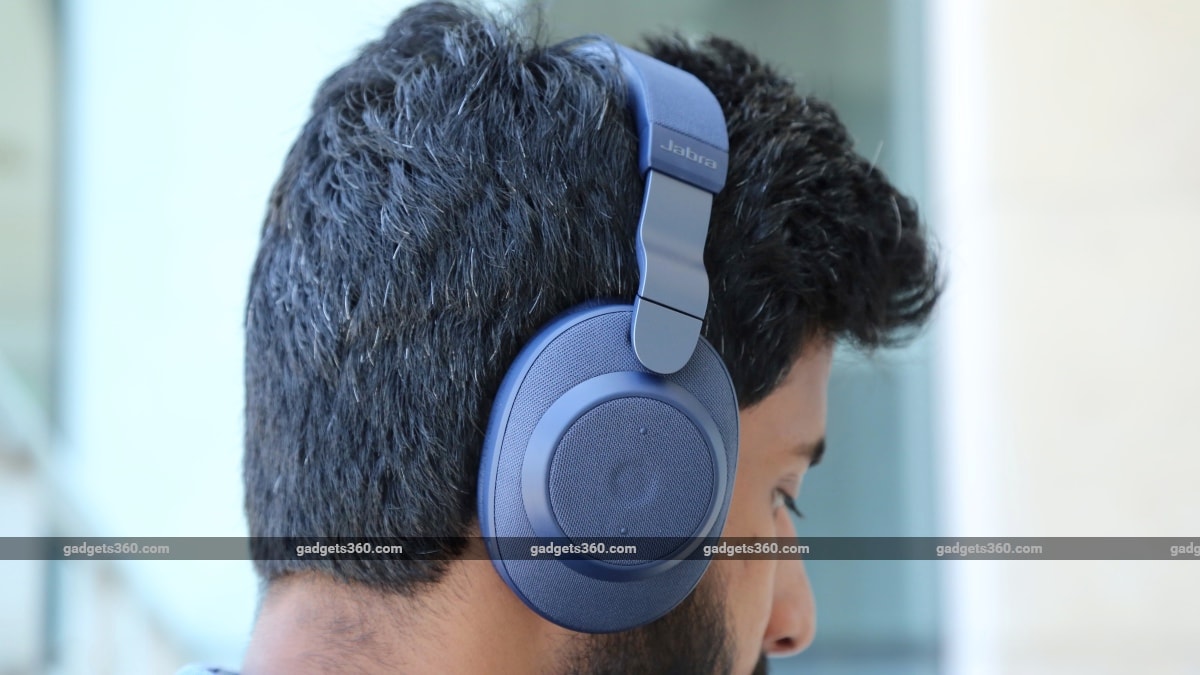 Two features have risen to characterise technological advancements in high-end headphones these days — wireless connectivity and active noise cancellation. While there are a lot of headphones that have either or both of these features, few do it well enough to be considered to be at the pinnacle of technology when it comes to personal audio. Two notable names come to mind, though: Sony and Bose.

The Sony WH-1000XM3 and Bose QC35II are rightly considered on top of the game, but these two excellent pairs of headphones now face a challenge from an unlikely competitor. While Jabra has been around for a while and has its hand in the wireless headphone space, active noise cancellation and premium design haven't necessarily been its strongest points. The Danish company hopes to change this with the Jabra Elite 85h.

Priced at Rs. 28,999, the Jabra Elite 85h, promises a lot when it comes to design, features, and sound quality. We've put this new pair of headphones through its paces, and here is our review.

With a price close to Rs. 30,000, we were expecting a lot from the Jabra Elite 85h in terms of design and weren't disappointed. This pair of headphones looks good, is comfortable to wear, offers enough passive noise isolation, and feels in every way like a premium pair of headphones should. This includes large ear cups with soft padding that completely encapsulated our ears, and a beautiful fabric coating on the outer side. A significant part of the device, including the frame, is plastic, but it is built quite well in our opinion.

If you tend to forget to fold the ear cups inwards, you can configure an auto-sleep function through the Jabra Sound+ app. This turns off the power when the headphones have been inactive for a preset amount of time, ranging from 15 minutes to 8 hours. You can also choose to disable the auto-sleep functionality altogether, but we would recommend keeping it on to ensure you don't drain the battery needlessly.

The Jabra Elite 85h has buttons on the undersides of both ear cups. There's one for the voice assistant on the right, and one for the noise cancellation mode on the left. The underside of the right ear cup also has a 3.5mm audio socket for wired input, and a USB Type-C port for charging. The side of the right ear cup also has buttons for volume and playback under the fabric coating, and these are almost indistinguishable because of the texture of the material.

The voice assistant button can be used to invoke Google Assistant, Siri, or Alexa on your smartphone. The sound mode button cycles between active noise cancellation on, off, and HearThrough, which passes ambient sound into the headphones for the user to be able to hear their surroundings.

The sales package of the Jabra Elite 85h includes a short USB Type-C cable for charging, an audio cable for wired use, an airplane adapter, and a carry case for the headset. The headphones use Bluetooth 5 for connectivity, but only support the SBC audio codec. The lack of AAC, LDAC and aptX support is a major shortcoming at this price, and gives the Sony WH-1000XM3 an edge over the Elite 85h. The headset uses 40mm dynamic drivers, and has a frequency response range of 10-20,000Hz.

Like other headphones in this category, the Jabra Elite 85h has excellent battery life. We were able to get around 33 hours of wireless use on a full charge with active noise cancellation switched on, which puts it in the same league as the Sony WH-CH700N and Audio Technica ATH-M50xBT, as one of the longest lasting pairs of wireless headphones. With active noise cancellation switched off, Jabra claims that the headphones will run for up to 41 hours on a single charge.

Many of the Jabra Elite 85's key features are accessed and controlled using the Jabra Sound+ app, available for Android and iOS. The app lets you tweak the equaliser and music as well as voice call sound presets. You can toggle the active noise cancellation and HearThrough controls, configure how the headset deals with voice calls, set the default voice assistant, see the exact battery level, toggle the auto-pause/ resume function, and update the firmware.

It also lets you set up specific sound profiles, called Moments. These specific profiles can be customised in various ways, including setting up the ANC and HearThrough mode, tweaking the equaliser, and changing various other settings. You can customise these profiles according to various use cases, such as when you're in public, in private, or on your commute.

Another feature that specifically requires the app to control is SmartSound. This lets the headset detect which Moment to activate by gauging your surroundings. This relies on detecting where you are, and it can be handy to have the device automatically turn off noise cancellation or apply other settings based on a profile. While the Jabra Elite 85h was able to detect and set profiles, we found it a bit simpler just to keep SmartSound off and manually adjust these settings according to our needs.

Now that we've covered the basics, it's time to talk about performance on the Jabra Elite 85h. We tested the headphones largely with a Samsung Galaxy S10e (Review) as well as with an iPad mini (2019), listening to both music and audio on TV shows and movies. We also used the headset for voice calls.

Starting with the excellent live version of Todd Terje's Strandbar at Oya Festival, we turned the volume up for maximum effect. This exciting track had its strong low-end and mid-range elements reproduced excellently on the Jabra Elite 85h, with everything from the electronic bass elements to the conga drums that were the special addition in this live performance sounding sharp, clean, and well defined. The Elite 85h was also able to keep up with the pace and excitement of this track.

Moving on to Tuxedo's So Good, with the volume turned down a bit, we were able to get a better sense of the sonic characteristics of the headphones. While the low-end response was excellent, the mids and highs weren't far behind in terms of quality.

We did find the sub-bass to be a bit weaker than on competing high-end wireless headphones, but this did to an extent help the rest of the frequencies shine through more clearly and distinctly. While this means that there isn't quite as much attack in the bass, we did quite enjoy the way this track sounded on the Elite 85h with its neutral-leaning characteristics.

Instrument separation was decent, as was the soundstage which felt wide enough. Interplay between the left and right channels was quick, and indeed, overall sound quality was enjoyable on the Jabra Elite 85h. Still, we couldn't help but feel that something was missing at the top.

Indeed, the lack of support for better Bluetooth codecs prevented the Jabra Elite 85h from sounding as driven, punchy, and complete as the Sony WH-1000XM3, and even the more affordable but ANC-lacking Audio Technica ATH-M50xBT. In short, when it comes to music, the sound quality is good, but not quite great.

As is the case with most of the Jabra headphones we've used, sound quality when watching videos or on voice calls is excellent on the Jabra Elite 85h. The headphones' excellent mid range helps get the best out of vocals, and this made for a good experience when watching TV shows and movies on a smartphone or tablet.

We also used the headphones with the included audio cable. Sound quality wasn't quite as good as when using Bluetooth - which benefits from the built-in amplification of the Elite 85h - but was good enough for those occasions when you run out of battery power and want to keep listening to something before you charge up.

On voice calls, not only was the sound of the person on the other end of the call clear and sharp, but they reported that our voice was clear and distinct even when we were in crowded areas, thanks to the six microphones effectively capturing our voice and cancelling out background noise.

The silencing effect wasn't quite as stark as on the Bose QC35-II or Sony WH-1000XM3, but the Elite 85h did a decent job on reducing ambient noise — in our case, the gentle hum of the air conditioner in the office, and the droning sounds of traffic, road works, and construction. While active noise cancellation did help in making music and voices more audible in loud environments, we found that it slightly affected sound quality in environments that were quiet, and we preferred to keep it switched off when it wasn't necessary.

Verdict
The Jabra Elite 85h is a very good pair of headphones, but it isn't quite the best in its segment. The design is excellent, battery life is top-notch, and some features such as the unique power mechanism and app-based controls are interesting, but this device doesn't go beyond ‘good' when it comes to sound quality, active noise cancellation, and the overall experience. We found the Sony WH-1000XM3 and Bose QC35II to be better options for the price.

That's where the Jabra Elite 85h lets itself down — the price. Globally, the headphones are priced at $300 (approximately Rs. 21,000) — around $50 (approximately Rs. 3,500) less than the Sony and Bose headsets. In India, the pricing means that the differences in quality aren't forgivable — at least until deals bring the price of the Elite 85h down. However, for fans of Jabra or anyone looking at excellent voice call quality, the Jabra Elite 85h is a good option to look at.