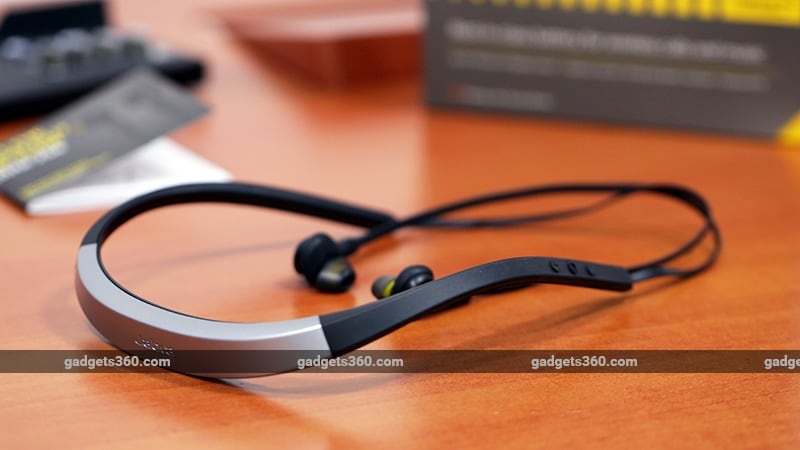 Jabra launched a brand new pair of Bluetooth headphones called the Elite 25e, earlier this month. This neckband-style headphone boasts of a weather-resistant design, a dedicated button for activating Siri or Google Assistant, and up to 18 hours of battery life.

However, what makes this pair of headphones very interesting it its price point. Jabra has launched it at Rs. 3,999, which is on par with (or even lesser in some cases) with its international pricing. Let's see if it manages to tick all the right boxes.

The Elite 25e is packaged well and in the box, you get two extra pairs of ear tips, a Micro-USB charging cable and a quick start guide. The neckband of the headphones are built from plastic and there's a rubberised coating that covers about 90 percent of the band. The neckband is contoured in a such a way so it rests on your shoulders. The rear portion of the neckband is a bit fatter, since it houses the battery but this also poses a slight issue during daily use. When you're walking about, the neckband stays put on your shoulder but whenever we leaned a bit back when sitting, we found them slipping off the back as the weight is concentrated at the back.

We have three buttons on the right arm of the band for controlling music, while on the left arm there's a button for summoning your device's virtual assistant and the grille for the microphone as well as an LED light. Both arms of the neckband are flexible so it's easy to wear and take off. Around the back of the neckband there's a Micro-USB port for charging, which is covered by a flap.

The earbuds are light weight and have a snug fit. The base of the earbuds have a removable gel padding, in case you wish to clean it but there's just one pair of this and it's pre-installed. The ear tips look like they've been squished into an oval shape but that's what they're supposed to look like. The extra tips include a small and large size (the medium comes pre-installed). These are very comfortable even for long listening sessions.

The Elite 25e weighs around 48 grams and features Qualcomm's CSR8635 Bluetooth chip. This uses Bluetooth 4.1 but lacks support for advanced codecs like aptX. Each earbud features a 10mm driver, which supports a frequency response of 20Hz to 20,000Hz. The headphones are also IP54 certified, which means they will survive a bit of dust and moisture. You can pair the Elite 25e with up to eight devices and use them with two at a time.

We tested the Elite 25e primarily with the iPhone X but also used it with a Pixel 2 XL. Initially, we found the headphones to be quite bass heavy as the lower end frequencies would often get quite boomy. However, after using it for a week, the drivers really opened up. The sound stage got wider and the bass wasn't as boomy as we initially found it. The Elite 25e offers very good ambient noise isolation and we had little to no sound leakage even at full volume. The maximum volume of the headphones could have been higher, as we often ended up listening to music at around 90 percent volume level. We didn't encounter any distortion here either.

The Elite 25e is a bit bass heavy, which we're sure many will prefer. Tracks like Lock Doh by Giggs is handled well as the bass delivery is tight, although we found the sub-bas to be a bit underwhelming. Electronic dance music is another genre that sounds good with these headphones. Going Wrong by Armin van Buuren has very good dynamics. In simpler tracks like John Mayer's In the Blood, we would have liked better separation between the vocals and the lower frequencies, which tend to overpower the finer notes in the track.

Due to the lack of NFC, you'll have to pair it manually. Like we mentioned before, you can have two devices connected to the Elie 25e at the same time. Once powered on, there's a voice prompt that lets you know when you're connected to multiple devices. You can even check the battery level by pressing the volume up button in standby mode. The controls for music playback aren't very easy to access and the centre, multifunction button, requires a bit of effort to press. A double press of the multifunction button will redial the last dialled number. If you use Siri or Google Assistant a lot then you'll appreciate the dedicated button for it. However, this can't be remapped for any other function.

The Jabra Assist app is also more fully featured on Android than it is on iOS, but the trouble is that it doesn't work very well. On iOS, the app immediately detects the headphones but on Android, we had a really tough time getting it to work. We tried this on devices running Android 7 too and there are times when it just doesn't detect the headphones. On iOS, you can have your mail and calendar events read out but this is said to work only when the Assist app is open. You need to setup your email account here (only IMAP accounts work) as you can't select existing ones. Oddly, Google flags this app as “less secure”, so you'll have to flip a switch in Gamil settings to allow this sort of connection. Once connected, we were still unable to get any read outs for incoming mails.

For calendar alerts, the app wasn't able to find any of our calendars initially but after a few days of installing the app, our calendars showed up and we were able to select them. There's a “find my headphones” feature too which gives you the approximate location of the headphones, provided they are connected to your phone. On Android, you get these same features plus more. Here, incoming text messages are also read out using your phone's available voice engines (Google's text-to-speech) in this case. You can also have messages coming in from social apps like Facebook Messenger, WhatsApp, and WeChat read out. The times the headphones connected to the app, the messages were read out just fine.

The headphones also vibrate when you're getting an incoming call. This feature doesn't require you to have the app installed. One really neat feature is the ability to pause your music by simply attaching both earbuds to each other with the in-built magnets. This also ensures they don't flop about too much when they're not in your ears. They feel pretty rugged too for everyday use and the wires don't tangle easily. Voice calls are pretty average here as we often found ourselves having to max out the volume in order to hear the person on the other end clearly. Voice quality isn't very good either.

The battery is rated to last 18 hours on a single charge but since we were using the headphones at high volumes all the time, we managed about 12-13 hours. This is still not bad for a neckband headphone. It takes roughly two hours to fully charge them from zero. When the battery is very low, you get voice prompts every few minutes to charge it.

For a mainstream pair of Bluetooth headphones, the Elite 25e are not a bad pick, especially if you listen to a lot of bass-heavy music. They look sleek, are rugged and weather resistant, have a good battery life and sound decent for the price. If you're looking for good detail in your music then these aren't really up to the task. Around this price, you'll find the Mivi Thunderbeats, which is another decent option to consider if you're not a fan of the neckband style headphones.