The relatively unknown iBasso was established in 2006. The company produces portable headphone amplifiers, DACs and connector cables, and its current flagship product is the iBasso DX80, a premium high-resolution audio player. iBasso hopes that the DX80 will compete with the established bigwigs of the high-resolution media player industry, such as Fiio and Astell & Kern.

The iBasso DX80 is an interesting product with plenty to talk about. It has a combination of looks and performance that makes it one of the more unique options around, but is it worth the Rs. 32,500 price tag? We find out in our review.

Design and specifications
When it comes to looks, the iBasso DX80 really stands out because of its shape. It's defined by its sharp lines and jagged proportions, which give the player a futuristic and eye-catching look. It's also fairly heavy at 178g, thanks to its all-metal build. A few people thought it was a rather alien-looking smartphone, although it's a bit too thick to be one.

The DX80 has a 3.2-inch 480x800-pixel IPS touchscreen at the front, which has a fairly sharp pixel density of 291ppi. The screen serves to display visual cues about the music you're playing, to modify settings and browse through the track list. There are physical buttons below the screen for to control music playback, while the right has the physical volume buttons and the left has the power button. The top of the device has a socket for SPDIF-out, the Micro-USB port for charging plus data transfers, and two memory card slots under a protective flap. The bottom has one socket to plug in your headphones, and one for line-out. The hardware is fairly simple as a result, with all connectivity options and frequently used functions in place. 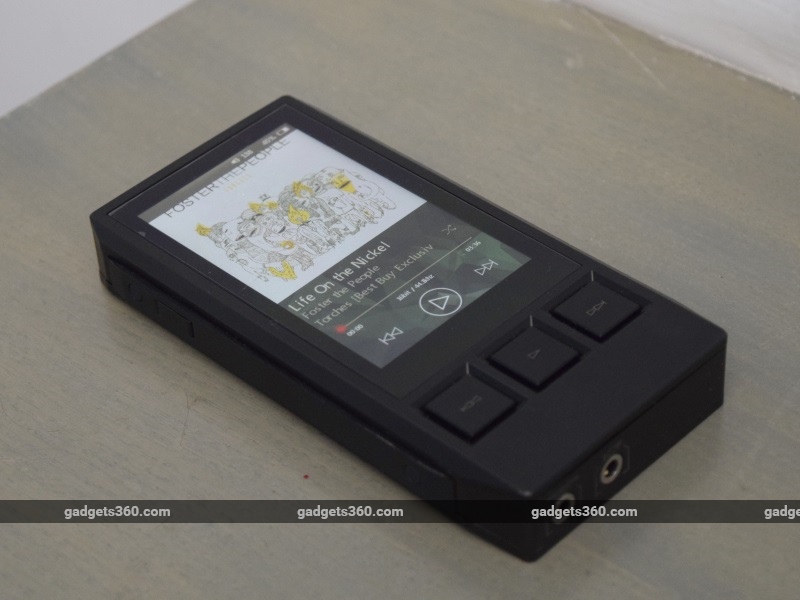 The audio player uses dual Cirrus Logic CS4398 DAC chips which support playback at up to 24-bit/192kHz resolution, along with a dedicated amplifier. There's no on-board storage, but the player theoretically supports up to a 2TB of storage on each memory card slot, and you can have up to 512GB of storage on the player right now with currently available MicroSD cards. There's also a 3600mAh battery that claims to work for up to 13 hours on a full charge, but we got only about 4-5 hours of usage during our time with the DX80.

Unlike the Fiio X7 which uses an Android-based user interface, the iBasso DX80 has a highly simplified proprietary UI. Swiping from right to left at the home screen brings up the settings, and you can tweak the equaliser, balance, display brightness and power management, or do a library scan to detect any new music you may have added to the memory cards. Swiping from left to right takes you to the music list, while a top-to-bottom swipe gives you quick settings. It's essentially built around ease of use.

Performance
We used the iBasso DX80 with a range of high-end headphones, including the Trinity Atlas, B&W P3, and HiFiMan HE400s. Our media for the review included different high-resolution audio formats, with focus tracks including Daft Punk's One More Time, an operatic version of Walking On The Moon, and Mountains from the Interstellar Soundtrack.

Starting with One More Time and the Trinity Atlas, we found that the iBasso DX80 was able to push out a sound that is full of detail, slightly warm, and definitely bass happy, if your headphones allow it. The player is driven and exciting on its own, adding significant quality to the sound based on how your headphones are tuned. Much like the Fiio X7, the player brings out the best in any headphones, but can also bring out weaknesses because of how revealing it is. The strong bass elements of the track sounded particularly tight and enjoyable, as did the vocals. 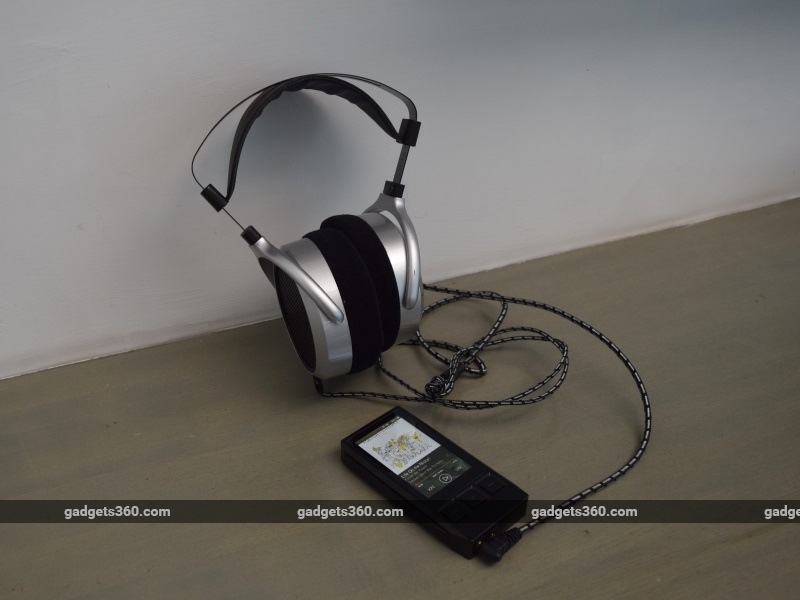 Next up, we listened to Walking On The Moon with the HiFiMan HE400s planar magnetic headphones. Although rated as low-impedance, these headphones aren't suitably amplified by typical smartphones or computers, and sounded a bit dull before we used them with the iBasso DX80. The device's amplification gives a significant boost to the sound, making them loud, aggressive and more detailed than before. It also shows that the better the headphones, the more the DX80 can do to improve sound quality. The instrumentals in the track retained all of their detail, timbre and soundstaging, and audiophiles will have an excellent time spotting the details in high-resolution audio tracks.

Finally, we listened to Mountains, and turned the volume up high. Despite the heavy amplification, there was no distortion to be heard, and the player succeeded in pumping out a strong, exciting sound. The sonic signature is just right as well, and provided you have headphones that you like, the player's signature will likely appeal to you. None of the elements are overbearing, so you can easily concentrate on what you want to hear. 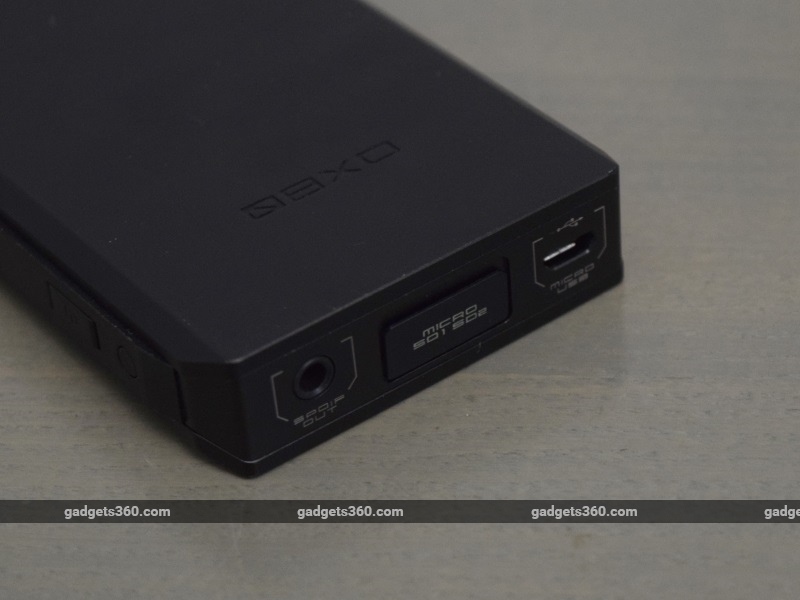 We even listened to compressed audio files, and while never bad, they definitely sounded a step below decent high-resolution audio files. The inherent flaws are highlighted, and you'll certainly prefer the openness of uncompressed files. That said, sound is still entertaining, and the iBasso DX80 gives the Fiio X7 a run for its money in this department. It works particularly well with high-quality headphones and is meant to be used with high-resolution audio files. There's a definite tendency to bring out the flaws in low-end equipment and compressed audio. 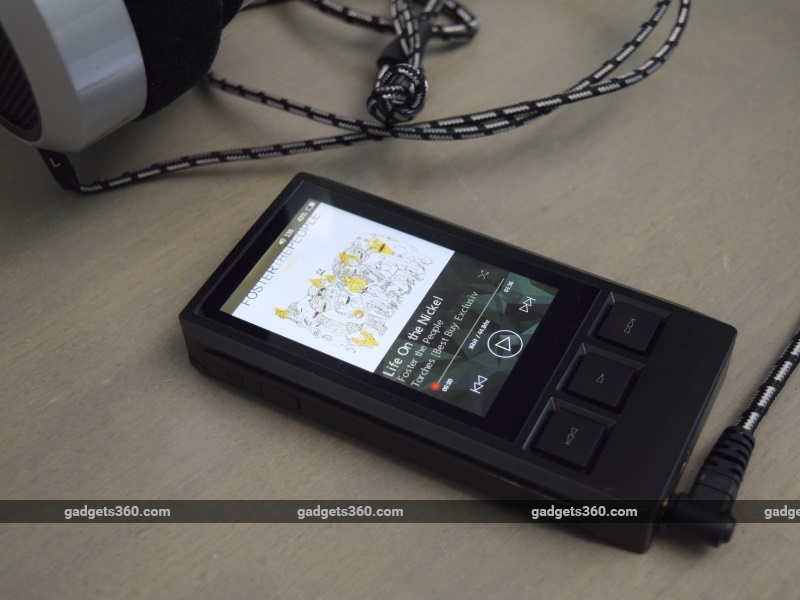 Verdict
Despite being a relatively unheard of brand, iBasso has an excellent product on its hands with the DX80. It's built beautifully and sounds great, bringing out the best in your high-resolution audio and high-end headphones. It can even be used as a digital-analogue converter with your PC, and does a great job as one.

However, there are some shortcomings. Despite the claim of 13 hours on a full charge, our review unit consistently managed to deliver only 4-5 hours. There's no internal storage or charging adapter included in the box; you're expected to use your own adapter or plug into a PC with the included cable to charge the DX80. However, despite the high price, this is an excellent option if you're looking for a good portable high-resolution audio player for on-the-go audiophile listening.