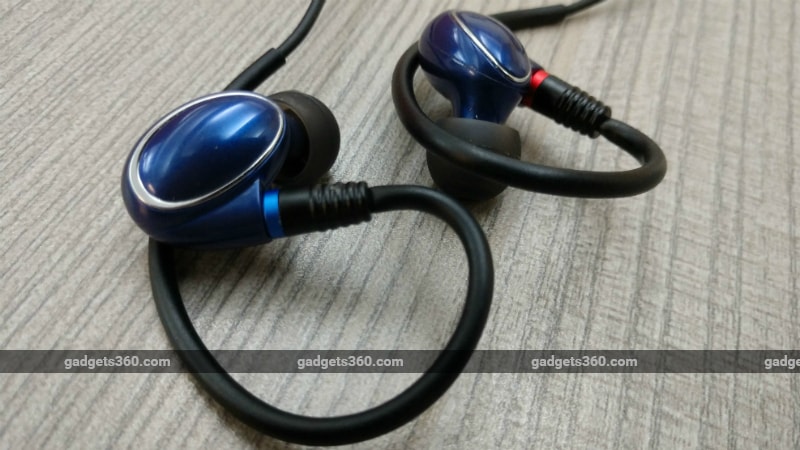 With its extensive lineup of audio players, DACs, amplifiers and earphones, Fiio has garnered a lot of respect amongst audiophiles in a relatively short span of time. The up-and-coming company has earned a reputation for offering high-quality products at relatively affordable prices. Fiio already has triple-driver earphones in its burgeoning lineup, and has now launched a pair of dual-driver earphones - the Fiio FH1.

The Fiio FH1 retails at Rs. 5,990 online and features detachable cables, a premium design, and a nifty waterproof case. Each earpiece of the Fiio FH1 has two drivers - a balanced-armature driver tasked with handling the mids and highs, and a dynamic driver that takes care of the bass and lower mids. Let's see if Fiio's newest earphones are a worthy addition to its arsenal.

Ever since it broke onto the scene a few years ago, Fiio has constantly been improving the design and build quality of its products. The Fiio FH1 feels very much like a younger brother of the Fiio F9. It is easy to see the shared DNA between the FH1 and its pricier triple-driver sibling - they are very similar in terms of comfort and isolation. Even the shapes of the housings are nearly identical.

Despite being made from plastic - which is a downgrade from the pricier Fiio F9's all-metal construction - the Fiio FH1 looks and feels extremely premium. These earphones do not feel cheap in any way. In fact, every element exudes quality, from the L-shaped, gold-plated headphone jack to the elegantly designed housings.

The FH1 ships with two cables - a regular one with a 3.5mm jack, and a 'balanced' one with a 2.5mm jack that can be used with an extremely limited pool of digital audio players but delivers a slightly more neutral and detailed sound. The box also contains a Pelican-style waterproof hard case for storage - which is of extremely high-quality and sells for close to Rs. 800 on Fiio's official website, if purchased separately.

The three-button inline remote with mic, located on the right earpiece's cable, is a major letdown. The buttons are mushy and rattle about in their enclosure. The MMCX connectors used to detach the cables are also stiff, which makes changing cables on the go a delicate and time-consuming process.

The compactness and ergonomic shape of the earpiece housings result in a nice, comfortable fit. Fiio bundles a plethora of high-quality silicone tips in the box as well, which allow for tons of personal configuration. Foam tips, which offer enhanced isolation and comfort, would have rounded off the package, but their absence is excusable given the FH1's relatively affordable price - for dual-driver earphones, that is.

The over-ear design takes a bit of getting used to, though - many will find themselves grappling with the the hook-style arrangement that wraps over the ears.

As mentioned above, the The Fiio FH1 slots in between the single-driver F5 and the triple-driver F9 in Fiio's ever-expanding in-ear earphones lineup. Each earpiece has one large titanium dynamic driver and one balanced-armature driver, the latter of which is made by a company called Knowles. This best-of-both-worlds solution allows for crisp, detailed mids and highs without having to compromise on bass - a problem faced by earphones built around only balanced-armature drivers.

We could tell the difference between the Fiio FH1 and the triple-driver F9 in terms of sound quality, but this isn't a bad thing. The dynamic drivers used for the Fiio FH1 are actually larger than the ones used for the pricier Fiio F9. As a result, the FH1 sounds warmer and less shrill than the F9. The bass also doesn't overpower the sound mix, and the overall sound signature is fairly neutral, with the lows, mids and highs all shining through without sounding dry and clinical.

The FH1 delivers tight, controlled and punchy bass which never becomes boomy or flabby. However, it does become a bit overpowering in predominantly bass-heavy genres such as EDM and R&B. Mids are refined with vocals sounding realistic, rich, and natural. That said, the mids are not as upfront in the sound mix, and fans of vocal-heavy genres like Blues should look at options such as the Shure SE 215.

The treble is crisp and energetic yet never sharp or sibilant. This means there's no fatigue when listening to genres such as Jazz and Metal. There is a little bit of roll-off in the high end and thus the treble is not the most detailed, but the fact remains that it never gets too pronounced or peaky. The clarity on offer here is also stunning for the price - instrument separation is excellent and the soundstage is wide and open.

Verdict
The FH1 aims to please the exacting audiophile community who demand to hear audio as recorded, as well all the bassheads out there - a compromise many earphones have tried, but failed to achieve. The FH1 however is one of a rare breed that manages to deliver deep and resounding bass without heavily compromising the rest of the frequencies.

For that reason alone, the Fiio FH1 is well worth its Rs. 5,990 price tag. Adding to its appeal, it is built well, comfortable, and comes with detachable cables. Purists might find the bass slightly overpowering at times, and the remote is fiddly and hard to use, but those looking for an entry point into the audiophile world will find that the Fiio FH1 is hard to beat.