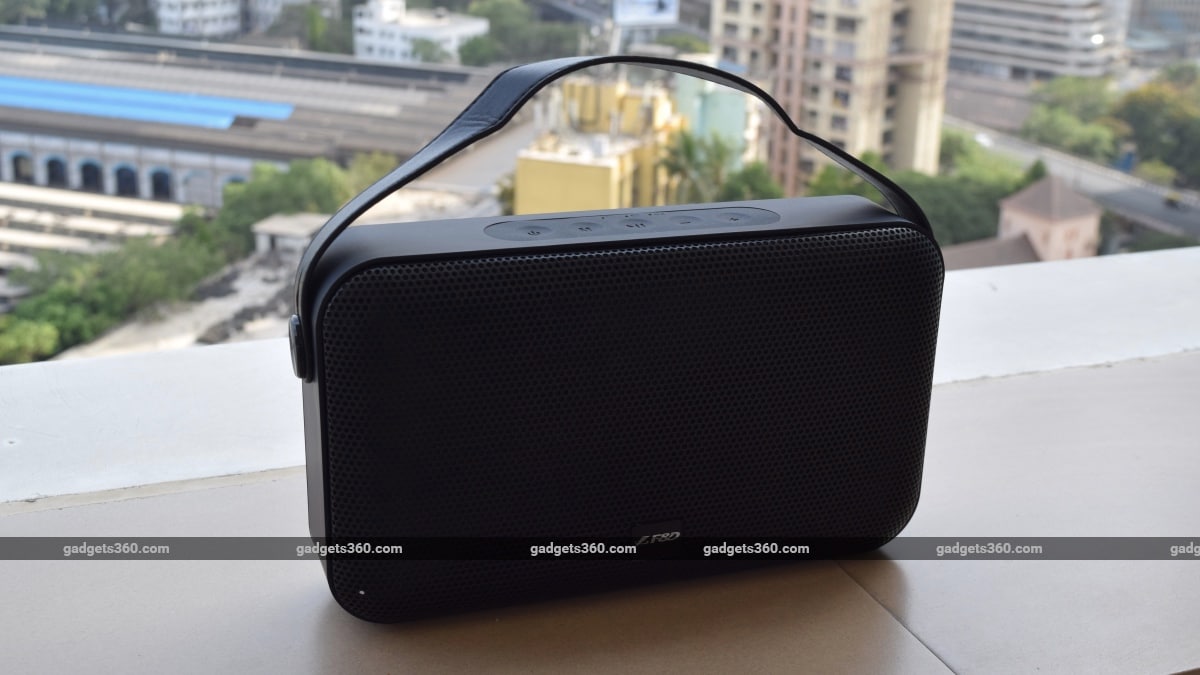 F&D, also known as Fenda Audio, has been around a lot longer than many of the newer brands that sell audio products in India today. Its products are available online, but it also has a strong presence in the offline space, where its multi-channel speaker systems are popular with buyers looking for affordable home and computer audio solutions. The brand also has a lineup of wireless speakers, with the latest product in the range being the F&D W19 Bluetooth speaker.

Priced at Rs. 2,990, this wireless speaker promises a lot, including good looks, loud sound and FM radio. Let's find out if the F&D W19 punches above its price, and whether it can compete in this crowded price bracket for wireless speakers.

Most of the speakers we've reviewed in this price segment have brick-like designs, including the similarly priced Boat Stone 700A. The F&D W19 is different; it's bigger, taller, heavier, and better-looking in our opinion. It looks similar to the much more expensive Bowers and Wilkins T7, and we feel that this design is best suited for use in indoor settings.

Unlike some of the competition, the F&D W19 speaker is not water resistant and will need to be used carefully. Included with the speaker is a strap that attaches to the hooks on either side of its body, and can be used to carry the speaker around. With the strap attached, the speaker somewhat resembles a handbag.

The speaker itself is built well and is quite sturdy. It has metal grilles at the front and back, with the front one covering the two 2.5-inch full-range drivers and the back one covering the passive radiator. The buttons for power, mode, play/ pause, and volume are at the top and have a rubberised finish. Also at the top are indicator LEDs for Bluetooth and charging status, along with a microphone. The F&D logo is on a badge on the front.

The speaker has a total output of 12W (RMS) according to the box, although online listings claim the total output as 20W. It uses Bluetooth 4.2 for wireless connectivity. Other connectivity options include a microSD card slot, USB port, auxiliary input, and FM radio. The radio uses a digital tuner, but it didn't work very well in our experience. We weren't able to get good reception and the sound had a lot of distortion and signal noise, no matter which radio station we tuned in to.

The F&D W19 has a Micro-USB port for charging its 3,000mAh battery. We were able to get 9 hours of playback from the speaker on a full charge, which is decent for the price.

While 12W of output is decent for a speaker at this price, the driver size and overall size of the F&D W19 had us expecting more in terms of volume. The speaker wasn't as loud as we expected, but it was enough to fill a normal-sized room with sound.

The F&D W19 has not only design in its favour, but also sound quality. It's not very loud, but it is surprisingly competent even at the highest volume. The speaker sounds very good for its price. The sonic signature is a consumer-friendly one, which we enjoyed with genres such as electronic, rock, and pop. The sound was bass and treble-focused, with the mid range response being noticeably weaker than the rest of the frequency range.

We listened to music using a Samsung Galaxy S9+ (Review) paired over Bluetooth, and starting with New Order's rock classic Blue Monday, we found the sound to be enjoyable, clean, and punchy. The low-end response was quite impressive, giving bass notes a bit of punch while keeping the sound as tight as we could have expected from an affordable speaker.

The highs were decent at moderate volumes, but pushing the F&D W19 a bit by increasing the volume tended to bring out a bit of sharpness in the highs. The strong lows and highs also tended to overpower the mid-range, and the vocals in the track felt a bit dull and soft as a result.

Moving on to the excellent Metropole Orkest rendition of Basement Jaxx's Romeo, we once again heard some quality in the highs, but they were occasionally piercing and shrill at loud volumes. We quite liked the attack and drive that the F&D W19 delivered when playing this track; it brought out the lively beat and the qualities of the various instruments at play capably.

However, the soulful vocals in the track were once again let down by the weak mid-range response, and despite the size of the drivers and the distance between them, the soundstage didn't feel as wide as we'd have liked.

Listening to the progressive track Conundrum by Shur-i-Kan, we quite liked the punch in the bass, but some of the drive was lost when we weren't listening from very close to this speaker. The sound tended to get muddied and lost a lot of its edge at even six-to-seven feet from our listening position. Listening to the F&D W19 from about two-to-three feet away was ideal in our case.

The F&D W19 has a microphone that enables its use as a hands-free device, but this is a small and rather ordinary microphone. Voice output was a bit soft, and the microphone was only able to pick up voices on our end of the call when we held the speaker in our hand. The W19 isn't ideally used for this purpose, but it's a useful feature to have for the occasional need.

Verdict
The F&D W19 is a simple, well-built speaker that looks good and is priced quite well for what's on offer. Its design and 12W sound output are its key selling points, and the sound is decent enough for the price.

This isn't an outdoor speaker, though; if you want one of those, the Boat Stone 700A might suit you better. The F&D W19 is best used indoors, and does a decent job at that. This speaker is definitely worth considering if you're looking for something for use at home for under Rs. 3,000.