Creative’s new soundbar is priced at Rs. 9,999 in India 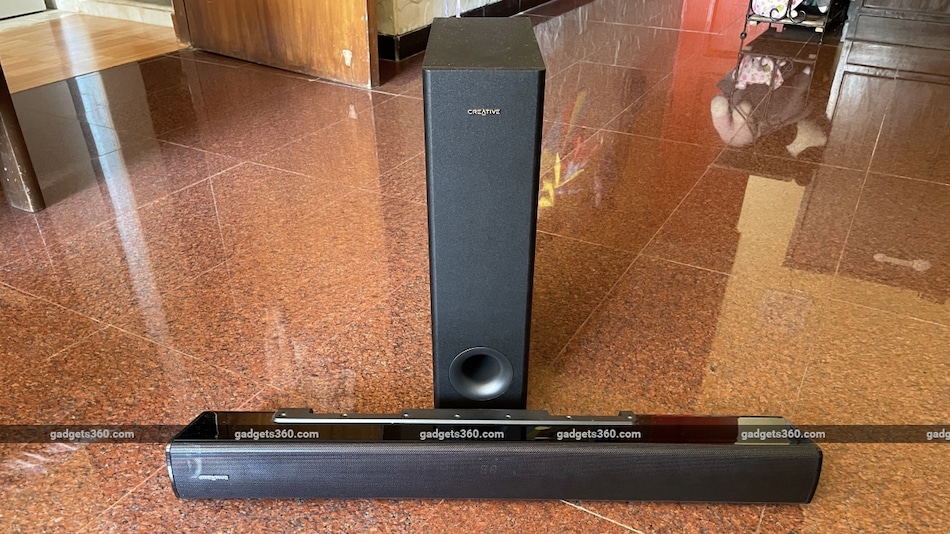 The Creative Stage V2 Soundbar has a separate wired subwoofer

If recent launches are anything to go by, affordable soundbars could be a major trend for 2021. While more expensive soundbars from brands such as Sony and JBL cater to an audience that would typically spend Rs. 1,00,000 or more on a television, there isn't as much on offer for buyers of more affordable televisions, such as the Mi TV and AmazonBasics ranges that are available at under Rs. 40,000. Realme made its first entry into this largely untapped segment with the 100W Soundbar closely followed by the product we're reviewing today - the Creative Stage V2 Soundbar.

Priced at Rs. 9,999, the Creative Stage V2 Soundbar promises a lot for a reasonable price, including a dedicated subwoofer, plenty of connectivity options, and a massive 160W of sound. What is particularly attractive about this product is Creative's legacy in the audio space, and the Sound Blaster tag that comes with it. Is all of this worth the Rs 9,999 price tag? Find out in our review of the Creative Stage V2 Soundbar.

The Rs. 9,999 price of the Creative Stage V2 Soundbar means that it isn't quite as enticing from the value-for-money perspective as the Realme 100W Soundbar, but it does promise to match its competition on some parameters and even go further on others. A big factor that weighs in its favour is the design; the Stage V2 looks considerably more sophisticated. Both the main bar speaker and the subwoofer look classy, with the iconic Creative logo prominently displayed at the front of both.

The bar speaker has a glossy plastic body with a metal grille at the front, and physical controls on the right side. There are ports and sockets at the back for power, the wired subwoofer output, Optical input (Toslink), USB Type-C, HDMI ARC, and a 3.5mm auxiliary input. There's also Bluetooth 5 with SBC codec support for wireless connectivity. The main unit isn't very long, and is ideally paired with a 43-inch or 50-inch television. A small monochrome display shines through the grille to tell you the status of the Creative Stage V2, including which source is in use, the volume level, and more.

The Creative Stage V2 is available only in black in India, and can either be placed on a table or wall-mounted. For the latter, you'll need to attach screws to the wall yourself, with the soundbar hanging on using the common keyhole-style hooks. Included in the sales package are power, USB Type-C to Type-A (male), and 3.5mm stereo cables, as well as the remote for the soundbar. Key connectivity cables such as HDMI and Toslink would have been nice to have in the box, since these are likely to be used with a TV.

The remote lets you control playback, volume, and bass and treble levels, apart from switching sources and activating the ‘Surround' and ‘Dialog' sound modes that Creative says are part of its Sound Blaster technology suite. It looks and feels good for the price, but it's worth mentioning here that batteries for the remote aren't included in the sales package. I also had some trouble with responsiveness; the remote had to be pointed directly at the soundbar for it to respond to commands.

You get a slightly different look on the subwoofer, which has a wooden body and matte finish, with a fabric cover over the grille on the right side and a bass vent at the front. Expectedly, for the price, it's a wired subwoofer that connects to the bar speaker for both the audio signal as well as power, with a fixed 2m cable. This takes away slightly from your ability to freely position the subwoofer in your room, but at least you won't need an additional power socket for it.

With a rated sound output of 160W, the 2.1-channel Creative Stage V2 claims to be louder than most options in this price segment, including the 100W option from Realme. However, this is a peak combined output rating, and the rated operational output is considerably lower at 40W for the two-channel bar speaker (20W per channel) and 40W for the subwoofer. The bar speaker drivers are 2.25 inches in size, while the subwoofer driver is 5.25 inches.

Although it has plenty of functionality, the remote of the Creative Stage V2 needs to be pointed directly at the bar to work

The Creative Stage V2 Soundbar is quite easy to set up and use, and is unobtrusive in its operation. When using the Optical input, I only had to turn the soundbar on for the TV to route audio to it (once the audio output preference was set up on the TV), and Bluetooth pairing and playback were similarly easy to work with. Oddly though, there's no support for high-quality audio encoding formats from Dolby or DTS, which might even create issues with certain streaming content not playing properly on the soundbar.

Soundbars in the budget segment are usually used for one key function – a volume boost over a television's capabilities. While the Creative Stage V2 Soundbar has a peak output rating of 160W, the reality is far from what that number suggests. With 40W of rated output from the bar speaker and subwoofer each, the Stage V2 is only a bit louder than many of the TVs I've reviewed, including the AmazonBasics Fire TV Edition TV I used it with during my review.

Where the Creative Stage V2 does shine, though, is in its ability to comfortably handle loud volumes. At the maximum volume, although it wasn't quite as loud as the Realme 100W Soundbar, it was considerably easier and cleaner to listen to, and moderated the continuously varying volume levels in movies and TV shows much more capably. While the TV's own speakers were good enough for casual viewing, the Creative Stage V2 Soundbar did offer a considerable improvement in sound quality for more involved viewing such as movies and many of Netflix's excellently produced TV shows.

Sound was well tuned for TV shows and movies, with a strong focus on the mid-range which made voices clear and sharp. The subwoofer did a reasonable job with the low-end, especially with the droning sounds of machinery and electronics in the classic Black Mirror Episode '15 Million Merits'. With simpler material such as New Girl on Disney+ Hotstar, or the dialogue and soundtrack-rich episodes of The Grand Tour on Amazon Prime Video, the Creative Stage V2 offered a clear, but subtle and controlled performance as compared to the Realme 100W Soundbar.

The bar speaker has two 2.25-inch full-range drivers, and plenty of connectivity options

Although HDMI ARC is the recommended method of connectivity for high-end soundbars because of its high bandwidth, this didn't matter too much on the Creative Stage V2 due to the device not supporting advanced audio formats. The basic formats that this soundbar can handle meant that I didn't hear any difference in sound quality across HDMI ARC or Optical. While Bluetooth is an option with most modern televisions, I found it best to only use the wireless connectivity with a smartphone or tablet to listen to music.

With movies and TV shows on the AmazonBasics TV, the Creative Stage V2 was in its element when it came to sound quality. Despite the lack of support for fancy audio formats, the speaker system capably handled 2.1-channel sound. Although not quite achieving the surround sound effect that many soundbars are marketed towards, the Stage V2 did succeed in widening the soundstage a bit, and targeting was improved thanks to its front-firing design, compared to using the TV's built-in speakers.

The surround sound virtualisation and clear dialog settings weren't quite as impressive as I had hoped. The former seemed to widen the soundstage a bit, but at the expense of definition and cohesiveness, while the latter simply boosted the mid-range for louder voices. I generally preferred the Stage V2's performance with both of these turned off.

While Bluetooth connectivity does make it easy to use the Creative Stage V2 as a home speaker for music, this isn't something I'd recommend doing often. The sound tuning is geared towards dialogue and sound effects, and pure audio content doesn't quite sound as good as it would on a pair of headphones or a decent smart speaker such as the Google Nest Audio or Apple HomePod mini. The Stage V2 can get relatively loud and the subwoofer does ensure decent bass, but the overall listening experience with music was ordinary at best.

If you don't want to use the remote, there are physical buttons to control the Creative Stage V2 on the side

Not a lot of big and established companies are in the affordable soundbar space, so Creative's entry with the Stage V2 in India is a refreshing option from a brand that's well-known for its audio products. Going up against competition from Realme, JBL, and Blaupunkt, Creative's credentials and reputation do give it a boost, and the Stage V2 is a product that largely lives up to expectations.

Although not as loud as I'd have liked, and with a few somewhat bothersome quirks, the Creative Stage V2 does sound good with movies and TV shows, and will complement most affordable televisions well enough. That said, if you do need something louder, the Realme 100W Soundbar is a worthwhile option and is a bit more affordable as well.