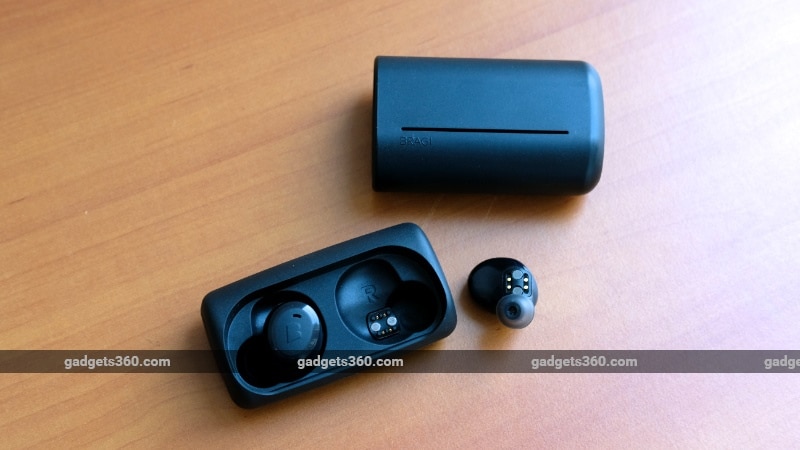 Truly wireless earphones have existed since before the AirPods launched, and Bragi is one of the few companies that was making them before Apple. Bragi is a German company that was founded in 2013 and its products are now available in India. Bragi's The Headphone is a pair of in-ear headphones with no wires except for a charging cable. The Headphone is a direct rival to the AirPods.

The Headphone is not intended for sports use, unlike some truly wireless headphones such as the Bose SoundSport Free or the Jabra Elite Sport but it also doesn't cost as much as either of those two. The biggest selling point of The Headphone is convenience, but every truly wireless pair of earphones in the market has its own advantages and disadvantages. Does The Headphone make compromises that are acceptable for most people? We used it for a week to find out.

The Headphone ships with an unusually large case considering the fact that there is no battery in it. This means that you can't charge this pair of earphones while it is inside the case. You can only charge The Headphone by putting the two earbuds in the case and then plugging the case into a charger. This is a strange design choice. Thankfully, the case has magnets that make it easy to insert the earbuds.

The Headphone is a pair of in-ear wireless headphones, which means that it goes inside your ear canal and seals it. This results in much better ambient isolation than the AirPods, which don't create a seal. The earbuds are quite compact and very comfortable. We had no trouble wearing The Headphone for long hours while working or during commutes. The fit is secure and there are three pairs of ear tips in different sizes in the box, which should do the trick for most people. The individual earbuds have no markings to indicate which one is to be worn in the left or right ear. We managed to remember that the right earbud has buttons and the left one does not, so the lack of L and R markings wasn't a big issue.

The buttons, however, are far from ideal. The Headphone uses soft buttons that are rather difficult to press. There are three buttons on the right earbud — play/pause, volume up, and volume down. We found it difficult to find the correct button by touch alone even after a week of use, and we kept having to try at least twice before finding the one we needed. We also found the buttons to be too small for our fingers. Switching The Headphone on or off, and triggering the voice assistant on our paired smartphone was tougher than it should be.

The Headphone works like standard Bluetooth headphones. Pairing with smartphones and laptops works as expected, and there were no unexpected hiccups. The Headphone does a great job by sending all audio including phone calls to both earbuds. Some products in the truly wireless category, such as the Bose SoundSport Free, route calls only through one earbud. However, there were a few odd things that did bother us during the testing period.

The Headphone also has a feature called Audio Transparency, which lets you let reduce the level of noise isolation and allow more ambient sound to pass through. This can be useful when you need to be aware of your surroundings, such as during a commute when you might want to hear what other passengers are saying. This feature works but you need to long-press the volume up button to switch it on, and long-press volume down to switch it off, which is too much hassle with the tiny buttons.

The microphone on The Headphone wasn't always up to the mark and some people we called complained that our voice was too muffled. Whenever we took the right earbud out of our ear, the left one stopped producing audio even though the song was still playing on our paired iPhone. When we took the left earbud out, the right one continued to play. We missed a few seconds of podcasts and songs this way. The Headphone also doesn't pause audio or turn itself off when you put the earbuds into the case. This means that you're always running the risk of draining the battery and will have to remember to pause playback or switch off the earbuds manually before putting them into the case.

We found The Headphone's sound quality to be surprisingly good even if the bass was lacking a bit. We listened to a wide range of tracks and podcasts with this pair of earphones, but our focus track was Riders on the Storm by The Doors. We felt that the lows weren't very well reproduced by The Headphone, but the vocals, mids, and highs sounded quite good. Instrument separation was decent, but we felt this could have been better. This track shines on headphones that can balance the rain sounds in the background with the instruments and vocals. The Headphone did a decent job overall, but if audio quality is your top priority you'd be better served by wired headphones.

The Headphone lasted around five hours on a single charge. While that is pretty good, we strongly feel that a charging case would have significantly improved the overall experience. With AirPods or the Jabra Elite Sport, we almost never had to worry about battery life because the moment the earphones are back in their respective cases, they start charging. With The Headphone, we ran out of juice during a commute and couldn't charge them before reaching our destination.

As we said at the beginning, truly wireless headphones are all about compromises. We think that The Headphone's benefits aren't enough to balance out its shortcomings. For instance, AirPods pause audio (on most Apple devices) the moment you take even one of them out, and most other headphones in this category can switch themselves off automatically when required. The lack of a charging case is also a big miss. The Headphone costs Rs. 12,999 in India and is available via Headphone Zone, which is more than Apple Airpods are currently going for. We think most people (yes, even Android and Windows users) would be better served with AirPods, unless they absolutely must have a truly wireless pair of sealed, in-ear headphones.