You can use the Asus AI Noise-Canceling Mic Adapter with mobile devices as well as PCs and laptops. 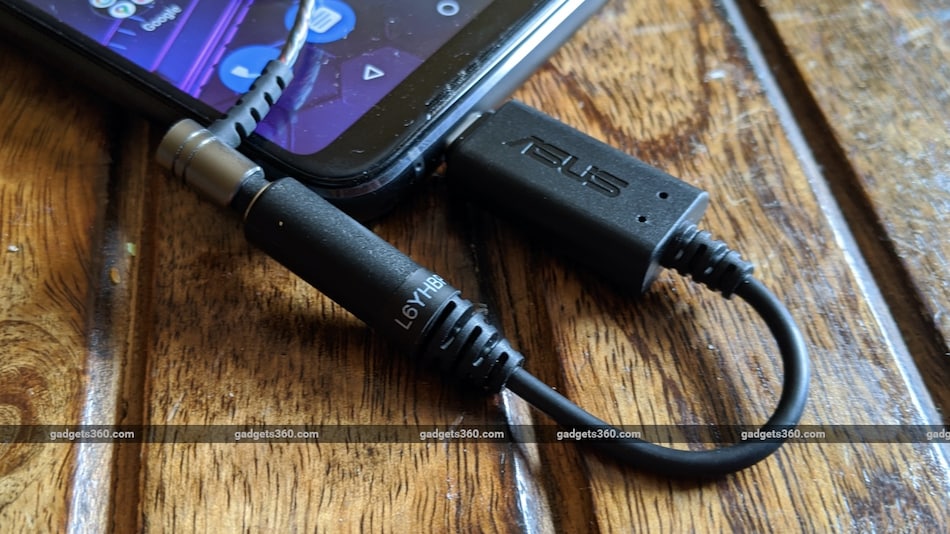 This small adapter lets you connect 3.5mm headphones to your USB devices

With many smartphones and laptops doing away with the 3.5mm headphone jack, and not a lot of USB Type-C headphones and earphones available, it's difficult to keep using good wired headsets. Although there are adapters and digital-to-analogue converters (DACs) available, these aren't always compact and easy to use. Asus' latest product, the AI Noise-Canceling Mic Adapter, hopes to fill in a gap that is rather niche, but will come in very handy for those who need it, particularly if you're working from home and are making more voice and video calls than usual.

Priced at Rs. 2,800, the Asus AI Noise-Canceling Mic Adapter can be used with smartphones, PCs, Macs, and the Nintendo Switch. Apart from the core function of letting you plug a 3.5mm headset into a device that doesn't have the headphone jack, it also offers environmental noise cancellation, which promises to improve voice call quality. Find out how this tiny device performs, in our review.

There isn't much in the box of the Asus AI Noise-Canceling Mic Adapter, beyond the device itself and a USB Type-C to Type-A plug adapter. Depending on the device you're using the Asus AI Noise-Canceling Mic Adapter with, you'll need either one or both components. The device is functional as soon as it's plugged in with no additional work required. There's a built-in DAC for analogue 3.5mm output, although this didn't make the sound any better than using the standard DAC and 3.5mm headphone jack on my MacBook Air.

One end of the device is the USB port, and the other end is a 3.5mm socket, into which you plug in headphones or earphones of your choice. Asus recommends that the AI Noise-Canceling Mic Adapter be used with a headset that has a built-in microphone, and I used it with the 1More Quad Driver earphones for this review.

While it worked fine with an Asus ROG Phone 3 (Review) and Google Pixel 3 XL (Review), I had trouble plugging the adapter into a OnePlus 7T Pro McLaren Edition. Although it occasionally got the connection right and worked for a few seconds, it wouldn't reliably stay in place.

When plugged into a MacBook Air using the USB Type-A plug adapter, the device worked well. You do of course need to set the audio to route through the USB port when using a PC or Mac, but this is easy enough. It's important to point out here that the device doesn't turn your simple earphones into noise cancelling ones. There's only environmental noise cancellation for the microphone here, which means that it simply cuts out background noise in your environment so that your voice is transmitted as clearly as possible.

You can also use the device with USB Type-A ports, by attaching the included fitting

Apart from letting you use your 3.5mm headset with your source device, the Asus AI Noise-Canceling Mic Adapter has built-in microphones that listen to your surroundings, using this to cut out background sounds on calls. On voice calls using my smartphone or my laptop, the adapter made an audible difference in the quality of voice being transmitted.

It was able to properly isolate my voice, cutting out background sounds such as the hum of my ceiling fan and a robot vacuum cleaner working right next to me. The person on the other end of the call reported that my voice was indeed clearer, and quickly switching to the 3.5mm jack on the laptop with the same pair of earphones brought the background sound back into the call, suggesting that the device was doing exactly what it is meant to do.

There isn't much to the Asus AI Noise-Canceling Mic Adapter — it serves exactly two purposes, and works well enough (provided it plugs into your device properly). However, at Rs. 2,800, this adapter seems a bit expensive for what's on offer. The noise cancellation only works for outgoing voice, making this a rather expensive purchase simply to make your 3.5mm headsets usable with devices that don't have a headphone jack, or to enhance voice quality.

That said, if you're looking for something this specific in function, this is among the few such devices that you can buy. You could also consider an entry-level DAC such as the Shanling UP2 or iBasso DC01, although these don't feature environmental noise cancellation.