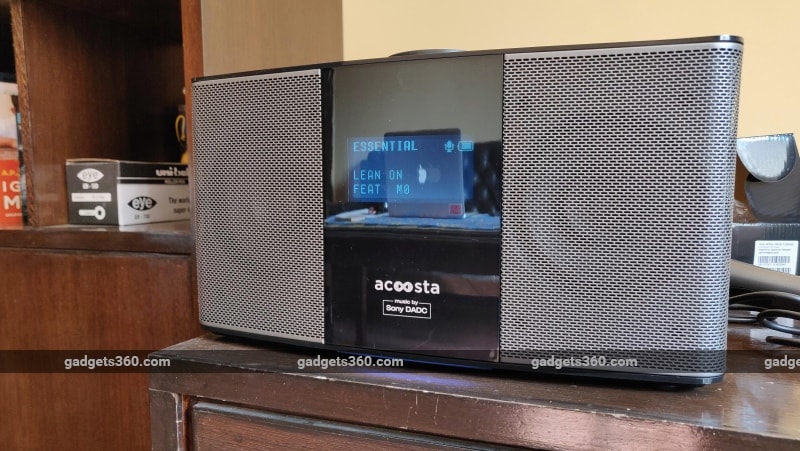 The Acoosta Uno comes with over 14,000 popular audio tracks preloaded and karaoke support

Most wireless and portable speakers need a source device to provide the ‘material', so to speak. This is usually as easy as connecting a smartphone to the speaker over Bluetooth, and using music you have saved on the phone or simply streaming using one of many free or paid services. There are other ways as well, but most speakers need an external source device in one form or the other. But now, there's a way to do away with that, thanks to a new breed of portable speakers that have music preloaded.

Today, we're reviewing the Acoosta Uno, a speaker that boasts of a collection of over 14,000 tracks that are ready to be played directly from the speaker itself. There are other connectivity options as well, so this isn't limited to just what's stored on the device. It's a similar concept to the Saregama Carvaan and recently-launched Saregama Carvaan Gold, but with a wider collection of tracks across various genres to listen to. Read on to find out all you need to know about the Acoosta Uno.

While wireless speakers in this price range are ordinarily small and portable, the Acoosta Uno takes a different approach to the segment. It's a large speaker that is designed to be used primarily at home, although you do have the option to take it along with you wherever you go. It isn't huge, and you can easily lift and carry the Acoosta Uno with one hand thanks to its all-plastic body.

Despite that, the Acoosta Uno looks good and feels solid enough. There are two primary speaker drivers firing forward, and a pair of bass ports for the low-end at the back. The Uno is claimed to have an output of 2000W PMPO. The concept of PMPO itself is a bit misleading, and the actual output will be much less in practice. However, it's an impressive number to quote, and the speaker is much louder in practice than most other speakers available for less than Rs. 10,000.

The top of the device has the controls, with a massive dial-cum-button for volume and navigation. There are also buttons to control up to two connected karaoke microphones (which can be purchased separately for Rs. 999 each), buttons to select the source quickly, and of course, a large power button.

We were sent one microphone for testing, and it worked well with the Acoosta Uno. The ability to connect two karaoke microphones adds a social touch to the product. Further, the audio from the microphone didn't overpower the music at all during our time with the Uno.

Connect a karaoke microphone to the Acoosta Uno and croon away

The back of the Acoosta Uno has ports and sockets for an FM antenna, two karaoke microphones, a 3.5mm auxilliary input, a USB drive (the Uno also lets you record tracks onto a connected USB drive) and a Micro-USB port for charging. The sales package includes an FM antenna, a 3.5mm cable, a remote, a wall adapter, and a USB cable for charging. The remote is a convenient size and has all of the buttons and controls you need to navigate around the Acoosta Uno.

Connectivity options on the Acoosta Uno are as you would expect, with Bluetooth, an auxiliary socket for wired connections, USB, and a tuner for FM radio. Apart from these, the Acoosta Uno has a massive library of 14,000 preloaded audio tracks, which can be played without the need for an Internet connection or any source device. This is the speaker's stand-out feature, and will appeal to a lot of users who are looking for a simpler listening experience or hoping to (re)discover songs, old and new.

The 14,000 tracks on the Acoosta Uno are licensed from Sony Digital Audio Disc Corporation (DADC). This is similar to what you get on the Saregama Carvaan Gold, but with a lot more variety in terms of genres and languages.

There is a huge catalogue of English music, along with current and classic Bollywood tracks, devotional music, nursery rhymes for children, and more. The music is categorised into over 200 playlists, which offer easy access to specific genres and music from particular decades. You can also search for individual tracks using the search function, but typing search terms isn't easy with the remote or the controls on the speaker itself.

Many of the tracks we played were a bit dated, so don't expect to find many of the recent hits you've been hearing on the radio or online. However, you have Bluetooth connectivity for that. The preloaded music works for nostalgia and pure convenience of being able to hit play and letting the speaker handle things from there.

The Acoosta Uno has a lot of features that make it an impressive product, but the most important test is audio quality. We largely used the speaker with Bluetooth using an Android smartphone, as well as with the in-built audio tracks. We also tested the performance of the FM radio tuner, as well as using the 3.5mm input for auxiliary connectivity.

For use at home, the Acoosta Uno sounds decent and can fill up a room. It's also loud enough to be satisfactory outdoors as well. The two primary drivers allow for loud sound, while the bass ports add a bit of punch. The mid-range tends to be a bit repressed, while the highs and lows are where the real drive can be heard. Sound isn't fantastic, but for around Rs. 9,000 it's acceptable and suits most popular genres.

Starting with Bluetooth connectivity, we listened to Floating Points by Nuits Sonores. While there were occasional moments of excessive bass in this progressive house track which favours the low-end, the Acoosta Uno does a good job with the gradual buildup and excitement. With most popular music genres that rely on fast-paced tempos and a strong low-end, you'll be pleased with the sound.

With Paper Romance by Groove Armada, we found that the previously mentioned recessed mid-range did to an extent impact the reproduction of vocals. While the lows and highs were still capable, the sound wasn't as clean. This was the case with other vocal-favouring tracks as well; the Acoosta Uno just isn't as capable, exciting, or clean with gentler tracks.

Moving on to the music preloaded only the Acoosta Uno, we listened to a variety of tracks across genres and languages. While browsing through the Hindi-language content, we found some interesting tracks from way back that brought back some memories, including Babuji Zara Dheere Chalo and Gal Mitthi Bol, along with classics in the Rock section from The Doors and Led Zeppelin.

The Acoosta Uno  appears to have been tuned to sound best with Bollywood music, and the two Bollywood tracks above sounded particularly good.  The quality of the recordings on the speaker is also excellent. However, the sound tends to warp a bit if you're sitting outside the sweet spot of the device.

After listening to a variety of audio tracks across various genres, we came to the conclusion that sound is better when using the preloaded audio tracks, purely since this does away with any signal loss over Bluetooth. Furthermore, these are high-quality recordings, which helps the sound considerably. Functions such as FM radio and wired connectivity also worked well, although the former does require an antenna to get the best signal. A cable-style antenna is included in the sales package, as is a stereo 3.5mm aux cable.

Although the Acoosta Uno is largely designed to be used at home, there is added convenience in the form of a built-in battery that lets you use it wirelessly when needed. Multiple drivers and the small display mean that the battery won't last as long as with other similar sized products; we managed to get about five hours of playback on a full charge with mixed usage.

Charging the speaker takes a little over three hours with the included adapter and cable, which is acceptable enough. The Acoosta Uno's display provides an indication as to what the battery level is, but this was largely inaccurate in our experience. In one instance, the speaker powered down due to a drained battery even while the indicator showed what appeared to be a one-third charge. You can also charge other devices using the battery on the Acoosta Uno through its USB port.

Verdict
The Acoosta Uno was a bit of a surprise for us; we didn't expect it to be this good. While our initial impressions were that it might be a karaoke-focused product, we were left with a good feeling after our time with it. Sound quality isn't the best among speakers priced below Rs. 10,000, but the Acoosta Uno more than makes up for that with its loudness, excitement, and nostalgia-inducing catalogue of preloaded music. It's also worth pointing out here that though the Acoosta Uno has an MRP of Rs. 14,000, it can usually be found online for around Rs. 9,000.

Although the Saregama Carvaan Gold is similar in many ways and is a good choice for anyone with a taste for Hindi classics, the Acoosta Uno does more, provides a more universal catalogue, and is louder. The Acoosta Uno is therefore definitely worth considering for anyone shopping for a speaker for their home, particularly if you're looking for a simpler way for everyone in your family to access music.