There are some interesting features, but how do these true wireless earphones sound? 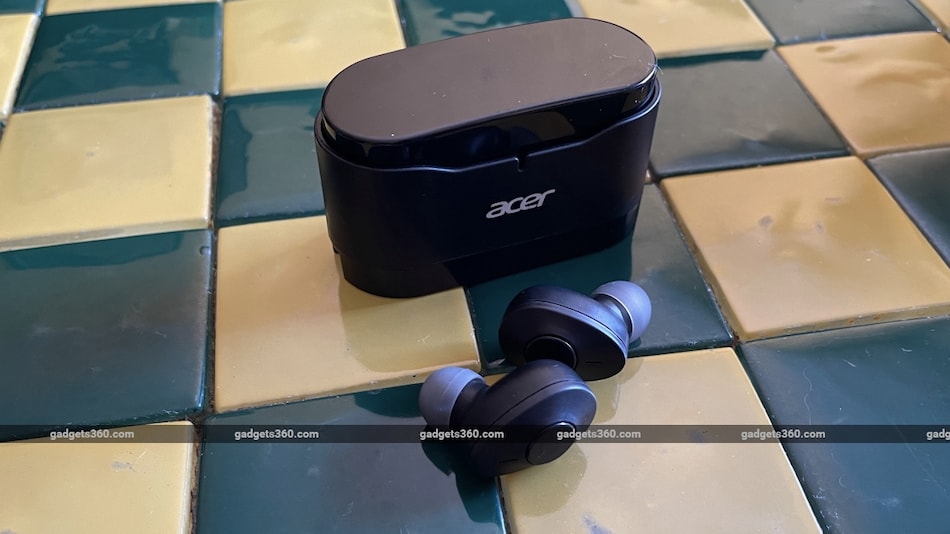 Taiwanese electronics manufacturer Acer is best known for its computer hardware, particularly laptops and desktops. However, the company has tried its hand at different product segments over the years, including smartphones, tablets, and even televisions. What has remained common across its core range is a focus on value for money, with Acer's offerings usually priced competitively. A very recent new category in its product range is personal audio, and one of the company's latest products is the Acer True Wireless Earphones (GAHR010).

Priced at Rs. 2,499 in India, the Acer True Wireless Earphones (GAHR010) is simple and to-the-point when it comes to design and specifications. There are a couple of noteworthy points about the charging case, which I'll talk about in greater detail. Is this a worthwhile pair of affordable true wireless earphones? Find out in this review.

Affordable true wireless earphones are expected to be simple, and that's almost exactly what you get with the Acer True Wireless Earphones. The plastic earpieces are plain and unassuming, with no logos to be seen. There is a single physical button on each earpiece, and they have a secure in-canal fit which ensures decent passive noise isolation. There are no stalks; instead the earpieces have narrow openings for the microphones and indicator lights.

I found the earphones comfortable enough to use for a few hours at a stretch, and even while exercising. The sales package contains just two pairs of ear tips; while the factory-fitted ones gave me a decent fit, it's a bit disappointing that more tips aren't included for people who might need them.

The controls are a bit awkward, not only because of the physical firmness of the buttons themselves, which makes them a bit difficult to press without upsetting the fit, but also in terms of the actions you need to learn. A single press plays and pauses music; a double-press calls the last contact in your recent calls list; a triple-press on either side goes to the next or previous track; and a long-press invokes the default voice assistant on the paired smartphone.

The double-press shortcut was too easy to accidentally trigger. It's completely unnecessary, and even quite inconvenient, since this led to a few unwanted calls going out. The triple-press action might not sound unusual when reading this, but the orientation was strangely reversed and very confusing as a result; the button on the left earpiece skips to the next track, while the one on the right skips to the previous one. This oddly difficult control system meant that I usually preferred to use my smartphone to control music.

The charging case of the Acer True Wireless Earphones (GAHR010) is quite different from the ones that come with most other options in the affordable segment, thanks to a couple of key features. The inside of the case has a digital display to indicate the charge level of the case itself. There is also no charging port; instead, there is a fixed USB Type-A cable to charge the case, which slots into place at the bottom when not in use. This design makes it inconvenient to connect the case directly to a USB wall adapter, but it's handy if you intend to charge the earphones and case using a laptop on a flat surface.

The earpieces of the Acer True Wireless Earphones sit in place in the case magnetically. What I definitely didn't like about the case was the lid; it's a loose piece of plastic that isn't attached to the rest of the body, so it can come off easily and get lost if you aren't careful.

The Acer True Wireless Earphones (GAHR010) is powered by 8mm dynamic drivers, and uses Bluetooth 5.1 for connectivity. The SBC and AAC Bluetooth codecs are supported. I was able to use the earpieces for around three hours on a single charge, with the charging case adding an additional three charges to the earpieces. This made for a total battery life of around 12 hours per charge cycle, which is pretty average even considering the price segment.

I've used many pairs of true wireless earphones priced below Rs. 3,000 in recent months, and I've found that the budget segment has come a long way from where it was even just a couple of years ago. It's possible to buy true wireless earphones that sound decent even at this price today, and there are some notable options that I've been impressed with, such as the OnePlus Buds Z and Redmi Earbuds S. Unfortunately, the Acer True Wireless Earphones (GAHR010) doesn't quite match up to the competition when it comes to sound quality.

Even though this headset does have the benefit of AAC Bluetooth codec support, the Acer True Wireless Earphones barely capitalise on this; the sound is rough, lacking in detail, and often too boomy for its own good. It's common to expect bass-oriented tuning in the budget segment, but it feels as though these earphones haven't been put through much tuning at all, apart from an obvious bump in the lows.

Starting with Welcome To The World Of The Plastic Beach by Gorillaz, the bias towards the bass was immediately evident in the sonic signature. The lows aren't simply louder or more pronounced; the bass has a powerful booming nature to it that feels too aggressive and lacking in refinement. This low rumble and boom often made the sound muddy, overpowering the mid-range and highs very easily. Snoop Dogg's rap verses sounded subdued, while the punchy beats unrealistically took all attention away from the rest of this slow electronic track.

With Renegade by Styx, the soulful vocals sounded dull and lacked any character whatsoever, while the instrumentals seemed to have no feel at all. The sound felt ‘piped', with any detail and definition that might have been present instead seeming muffled. I'm usually able to find something I like about the sound of the headphones and earphones I review, but the Acer True Wireless Earphones (GAHR010) offers absolutely nothing worthy of praise; even the boomy bass won't appeal to ardent bass lovers.

Apart from this lack of detail, there's also very little by way of soundstage and separation on the Acer True Wireless Earphones (GAHR010). Even the laidback and peppy If I Was A Folkstar by The Avalanches felt boring rather than cheerful, and the samples sounded narrow and lacking in any spaciousness. All of this made for an entirely forgettable listening experience.

Listening to podcasts and taking the occasional short voice call wasn't too bad on the Acer True Wireless Earphones (GAHR010), since the voice-focused sound didn't give the lows too much room to be boomy. Connectivity was stable over distances of up to 10 feet with no barriers in between the earphones and paired smartphone.

In a highly competitive segment that has seen some excellent budget true wireless headsets, Acer's attempt falls far short of the mark. It's affordable, priced at Rs. 2,499, and the charging case has some useful features such as the battery level display and fixed charging cable. However, the Acer True Wireless Earphones (GAHR010) simply does not sound good enough and its unique features cannot make up for this.

The unpleasantly rough and boomy lows tend to overpower everything else in the sound, and other small quirks such as the odd controls and easy-to-lose lid of the charging case don't really help in making any arguments in favour of this headset. You would be much better off spending a bit more on the very good OnePlus Buds Z.