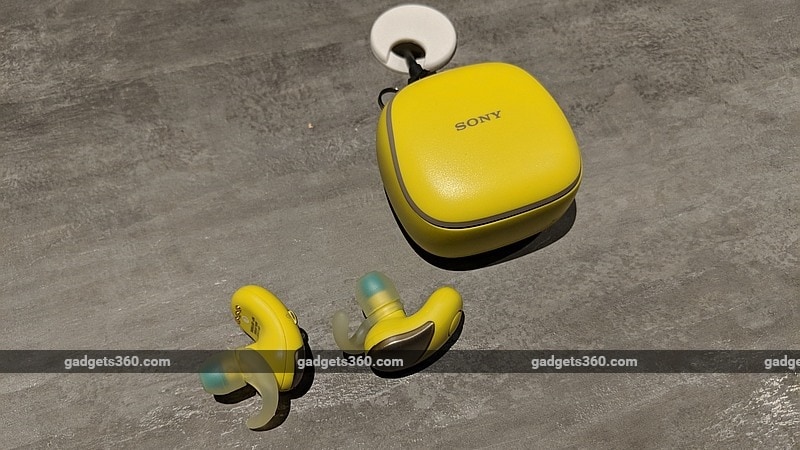 Sony on Monday at CES 2018 in Las Vegas brought a bunch of goodies for audiophiles. Taking on Apple's AirPods and Samsung's Gear IconX, the Japanese company unveiled the WF-SP700N wireless noise-cancelling stereo headset and a sports-centric WI-S600N with the behind-the-neck style. The company also showcased the MDR-1AM2 headphones and a range of Extra Bass Bluetooth speakers, including the SRS-XB41, SRS-XB31, and SRS-XB21. All the new models are expected to hit stores in the US sometime around this Spring.

Amongst all the new Sony sound-centric announcements, the WF-SP700N are perhaps the most compelling one. The earbuds are designed with a cord-free build to rival likes of the AirPods and Gear IconX. Sony has claimed that despite their portable size, the WF-SP700N are the world's first noise-cancelling and splash-proof (IPX4) wireless headphones. They are funky colour options to attract the youth and a battery life of three hours. This is notably less than the five-hour battery life claim that comes with the AirPods and Gear IconX. However, Sony's earbuds also come in a "one-touch open" case that can offer an additional charge of nine hours.

If you're not looking for an alternative to the AirPods or Gear IconX but have a dream of owning the Google Pixel Buds one day, Sony has the WI-SP600N neckbuds that also have the noise cancellation and IP4X-certified build, similar to the WF-SP700N earbuds. But there is more juice than the portable offering to deliver you continuous playback for nine hours.

Sony is planning to make the WF-SP700N and WI-SP600N even smarter and better options over the competition by integrating Google Assistant in the coming future. The Google Assistant integration is also in plans for the last year's 1000X series. The advanced experience will come through individual software updates. However, there are no concrete details about their arrival.

Coming to the Sony MDR-1AM2, the headphones have 40mm HD driver unit that can deliver up to 100 kHz frequencies playback. There are aluminium-coated liquid crystal polymer diaphragms. Also, the around-ear headphones have a 1AM2s feature with a Fibonacci-patterned grill to support high-frequency ranges as well as silver-coated OFC (oxygen free copper) to reduce instances of transmission signal loss. The company has bundled a standard cable as well as a 4.4mm balanced connection to deliver an enhance the audio experience.

The Sony SRS-XB41, SRS-XB31, and SRS-XB21, on the other side, are the company's newest models in the Extra Bass lineup.

They all have a Live Sound mode that is touted to create a 3D audio experience with a prime focus on bass and come in an IP67-certified water-resistant build. Further, the speakers are designed to be a part of your parties by letting you pair not just one or two but up to 100 of them together to get a surround sound experience.