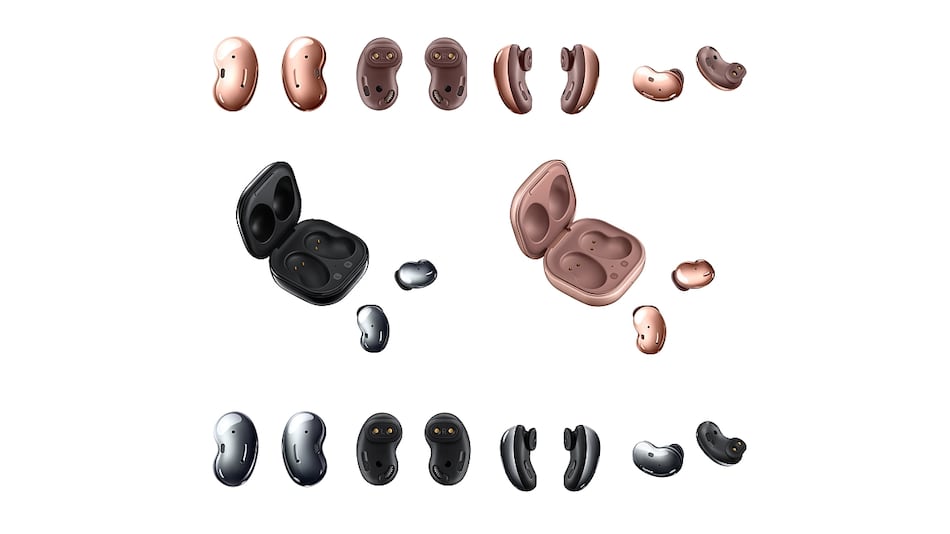 Samsung will be launching the latest iteration of its true wireless earphones, the Galaxy Buds Live, at the Galaxy Unpacked 2020 event on August 5. The earphones have already been leaked in several renders and information about them is widely available on the Internet. The wearables have once again popped up on Twitter offering a complete look from a number of angles. The most striking feature about the Galaxy Buds Live in the latest leak is a redesigned square-shaped charging case, and there's a black colour variant as well.

The images tweeted by tipster Ishan Agarwal show the Samsung Galaxy Buds Live from various angles. Firstly, there are two colour variants of the buds: Mystic Black and Mystic Bronze. A previous report claims that there is a white colour option as well but there's no mention of it in the latest leak. The bean-shaped earbuds have a newly-designed case that has a squarish profile.

These renders show us that wing tips which is how they will be able to fit well inside your ears. Looks cute, honestly. With ANC. Thoughts?#Samsung #GalaxyBudsLive #Unpacked pic.twitter.com/eul5EyAvk0

Last week, tipster Roland Quandt shared details and specifications of the Samsung Galaxy Buds Live. According to his tweet, the earphones are claimed to deliver a 4.5-hour battery life. There's no information on how many times the case can recharge the buds. The renders show that the buds sport a three-microphone setup on each bud. Various sources have also confirmed the presence of active noise cancellation and the correct technique for wearing them.

They are claimed to come equipped with 12mm dynamic drivers. The renders show that the earbuds will not have any silicone ear tips. There's also a “vent-like speaker” in the middle of the bud. The price has been tipped to be $169 (roughly Rs. 12,600). Further, in one of his recent tweets, Agarwal suggested that the Samsung Galaxy Buds Live may be priced at around EUR 189 (roughly Rs. 16,600). The Galaxy Buds Live will be officially unveiled at Galaxy Unpacked 2020 along with the Galaxy Note 20, the Galaxy Watch 3, Galaxy Tab S7 series and the Galaxy Z Fold 2.