Realme Buds Air Pro are teased to offer active noise cancellation of up to 35dB. 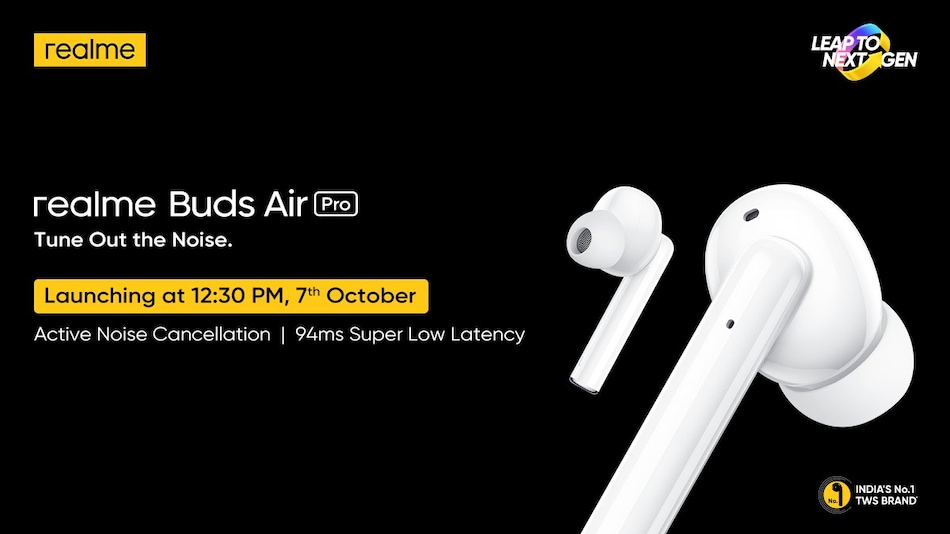 Sheth took to Twitter to announce that the Realme Buds Air Pro will launch in India on October 7 at 12.30pm. The executive also shared a poster along with the tweet showing off the design of the TWS earbuds. The Realme Buds Air Pro look inspired by the AirPods Pro TWS earbuds launched in the Apple lineup last year. These Realme earbuds are teased to support active noise cancellation of up to 35dB, and offer 94 milliseconds super low latency. More details will be revealed on the day of the launch next week.

Additionally, Realme is also teasing the arrival of the Realme Buds Wireless Pro earphones on Amazon India. The page reveals that these wireless neckband headphones will launch on the same day and time i.e. October 7 in India at 12.30pm. The Realme Buds Wireless Pro are teased to also support active noise cancellation of up to 35 dB. The headphones will also support Sony LDAC technology, Bluetooth v5.0 for connectivity, and Hi-Res Audio for nearly loss-less sound quality. As mentioned, there are 13.6mm bass boost drivers that are 21 percent larger than the previous generation.

The Realme Buds Wireless Pro are further touted to offer 22 hours of playback on a single charge. The headphones are said to last up to 16 hours if the ANC is kept on. Realme teases that 5 minutes of charging can offer up to 100 minutes of playback and it may take about 1.5 hours to fully charge the earphones. These earbuds offer 119 milliseconds super low latency.