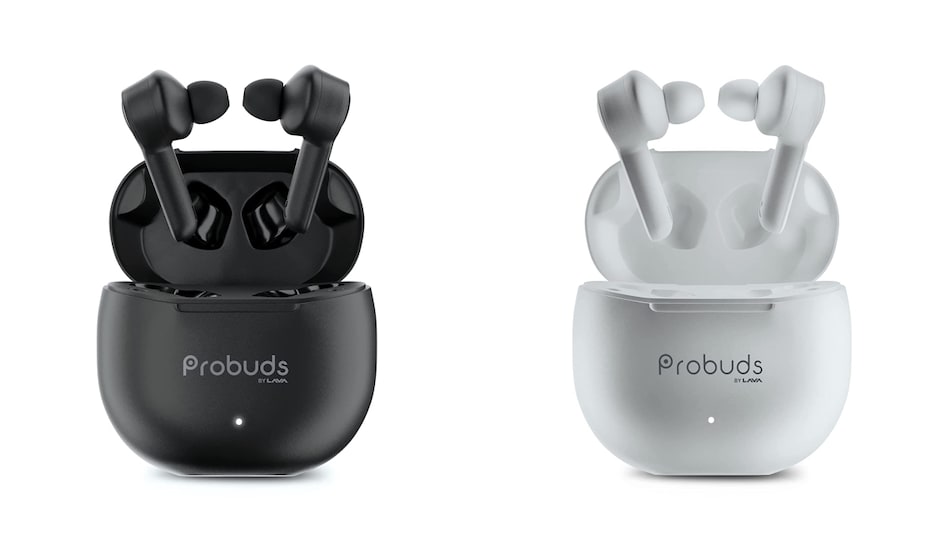 Lava Probuds 21 true wireless stereo (TWS) earphones were launched in India on Tuesday. The latest TWS earphones from Lava come with a special bundle where buyers will get a free subscription of Gaana Plus for a limited period. The Lava Probuds 21 TWS earphones feature 12mm dynamic drivers that are said to deliver a high definition sound. The TWS earphones are said to last for up to nine hours on a single charge and the charging case is said to charge the earbuds up to five times.

The MRP for Lava Probuds 21 TWS earphones has been set at Rs. 1,499. However, they are available for Rs. 1,299 for a limited period. They can be purchased via Lava's official online store and Amazon. They are offered in Black and White colour options. The TWS earphones also get one year of warranty as standard.

Along with the Lava Probuds 21 TWS earphones, customers will also get a three-month subscription of Gaana Plus, worth Rs. 199, free of cost.

Lava Probuds 21 TWS earphones feature 12mm dynamic drivers. The earphones also get sound insulation via the ergonomic design. They also get Google Assistant and Siri voice assistant support and can be connected to smartphones through Bluetooth v5.1. They also get Wake & Pair technology.

The TWS earphones are said to last for up to nine hours on a single charge. Each earbud packs a 60mAh battery and come with a 500mAh battery in the charging case. The latter is said to charge the earbuds up to five times. In total, Lava Probuds 21 TWS earphones are said to provide a playback time of up to 45 hours. Lava also mentions that a 20-minute charge provides up to 200 minutes of playback time. They are charged via a USB Type-C port.

Lava Probuds 21 TWS earphones get a frequency response range of 20Hz to 20,000Hz. The earphones have IPX4 rating for sweat and splash resistance. Furthermore, the earphones also get touch controls for music playback, accepting, or rejecting calls. Its charging case measures 56x50x15mm and weighs 51 grams.