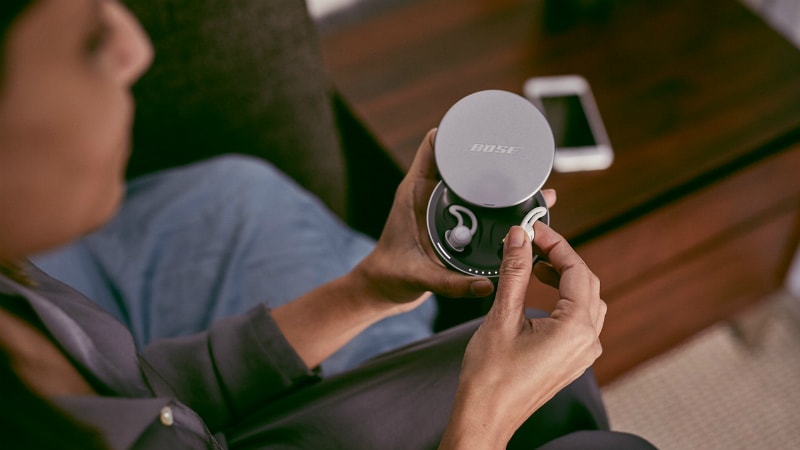 Bose Sleepbuds have been priced at Rs. 22,900 in India, and will be made available immediately

Audio manufacturer Bose on Thursday announced the launch and availability of its latest noise-masking Sleepbuds in India. These truly wireless earbuds block unpleasant noises while you sleep, with the help of Bose's proprietary noise-masking technology. They play subtle audio tracks that cut down on common noises around you. The ultra-light ear tips claim to offer a snug and barely-felt fit, and the earbuds can run for 16 hours on a single charge. To recall, the Bose Sleepbuds were initially tested through an Indiegogo campaign in November 2017 and later released in June this year.

Bose Sleepbuds with a high-gloss white finish have been priced at Rs. 22,900 in India, and will be made available across official Bose stores, select resellers, Boseindia.com, Amazon.in, and Flipkart starting September 20. Bose Sleepbuds are compatible with both Android and iOS, and come with the Bose Sleep app that offers various customisations to the user.

Each of the earbuds of the Bose pair weighs about 1.4 grams and measures 1 centimetre in height as well as width. A laser-etched antenna has been placed on the exterior to allow for Bluetooth connectivity with smartphones and tablets. As for internals, the Bose Sleepbuds get a rechargeable silver-zinc battery, a miniscule transducer, and a micro-circuit board with flash memory. Inside the package are StayHear+ sleep tips, included in three sizes, that create an additional barrier against external noise. The earbuds get a brushed aluminium charging case that holds an additional 16 hours of charge when unplugged.

"Noise-masking is a science," said Daniel Lee, Systems Engineer for Bose Sleepbuds. "It's more than ambient sound or white noise. You can't achieve it by simply turning up the volume on calming songs. And depending on the situation, it's more effective than active noise cancelling - even ours. During the day, QuietComfort headphones improve focus and productivity, or let you hear your playlists and calls clearly in loud places. But at night, you're trying to shut down completely, and the world is naturally more quiet - and when it's quiet, even the slightest sound seems loud. Bedside machines can't cover it, earplugs can't block it, and earbuds meant for sitting, standing, or moving can't be worn for hours laying down - especially on your side. But Bose Sleepbuds can. And if you're someone who's tried everything and nothing's worked, or haven't tried anything believing nothing will, we made them for you."

This is not the first time when Bose has released an offbeat, 'wellness'-focused audio device. Back in December 2016, the brand came out with the Bose Hearphones, a pair of headphones that act as an hearing aid, helping enhance the audio quality of conversations happening around you. The headphones also let users focus, amplify, or reduce real-world sounds to the level a user wants.