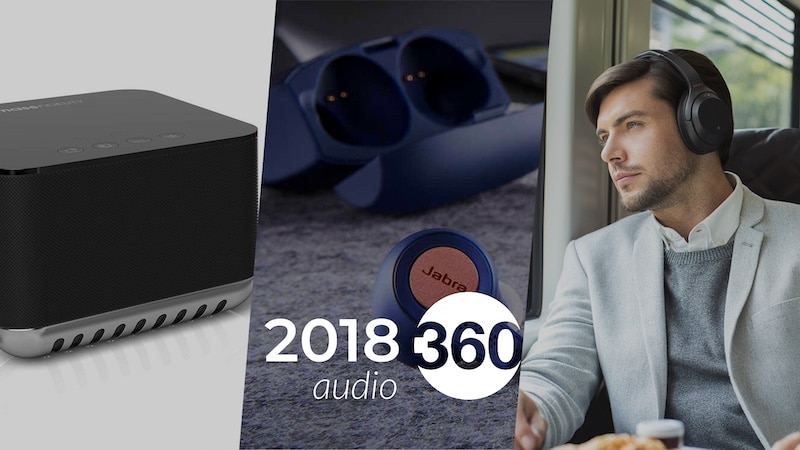 The audio industry has been experiencing a revolution ever since Apple had the ‘courage' to remove the headphone jack in the iPhone 7. Wireless headphones/ speakers are gaining in prominence and their wired counterparts are increasingly drifting away from the mainstream, towards the audiophile realm. As such, 2018 saw mainstream manufacturers like Sony and Jabra shift their focus towards wireless products, with new and emerging brands like Fiio and 1More catering to purists.

Without further ado, let's dive into our list of the best audio products of 2018.

A very unique offering in this list, the Sennheiser AMBEO smart headset is capable of recording binaural audio, which can then be heard via any ordinary pair of headphones. Today's smartphones offer the ability shoot crystal-clear 4K videos but most lack any means of capturing spatial 3D audio. This niche offering from Sennheiser fills this gap in the smartphone world.

While the ear hooks can get a bit fatiguing after a while, the sound on offer is detailed and crisp, with punchy bass and expressive mids. The AMBEO smart headset is compatible with iOS devices and is a great way to add a whole new dimension to the videos you record.

The M3K is an entry-level high-resolution audio player from Fiio, a company which has garnered a lot of respect amongst audiophiles in a relatively short span of time. The M3K uses the AKM AK4376A DAC (digital to analog converter) which is capable of decoding up to 384KHz/ 32-bit audio.

The device supports almost all popular high-resolution and lossy music formats (such as FLAC, ALAC, WAV, and MP3), and has a claimed battery life of 24 hours. Additionally, it supports microSD cards of up to 512GB and can be used as an external DAC with your Mac, PC, Android smartphone, or iPhone.

This product offers immense value for money and is the perfect gadget for an audiophile on a budget. At Rs. 5,999, it lowers the entry point into the world of high-resolution audio and that is the primary reason for its inclusion in this list.

Bose has always been the gold standard when it comes to noise cancelling headphones but Sony has finally managed to leapfrog the American sound giant with the Sony WH-1000XM3. Not only is the sound on offer lush, warm, and detailed, the noise cancellation is top-notch. Call quality through the built-in microphones is also quite impressive and Sony's Headphones Connect app allows you to customise the noise cancellation level.

The WH-1000XM3 also supports high-resolution audio codecs such as aptX, aptX HD, and LDAC, a feature missing from its primary competitor, the Bose QC35 II. Simply put, the Sony WH-1000XM3 is the ideal pair of noise cancelling headphones, and is well worth its Rs. 29,990 price tag.

Canadian startup Mass Fidelity's first product in India is not your typical Bluetooth speaker. The Mass Fidelity Core uses a technique called Wave Field Synthesis to reconstruct the sound field physically. This eliminates the ‘sweet spot' associated with most stereo speakers. All this jargon translates to an incredibly balanced sound, with stellar mids, crisp and pronounced highs, and punchy bass.

What sets the speaker apart from others in the market is the incredibly expansive soundstage, wherein the bass and vocals seem to fill up the room from every corner. Those who want room shattering volume levels should steer clear of this speaker. Priced at Rs. 33,999, the Core is a niche product which targets people who are very serious about sound quality.

The Fiio FH1 is one of a rare breed of earphones that manages to deliver deep and punchy bass without heavily compromising the rest of the frequencies. This is a result of the dual drivers present in each earbud — a balanced-armature driver tasked with handling the mids and highs, and a dynamic driver that takes care of the bass and lower mids.

Adding to its appeal, the FH1 is built well, looks premium, is quite comfortable, and comes with detachable cables. Fiio also throws in a waterproof hard case in the box, which is of extremely high-quality. Purists might find the bass overbearing at times but for most, the FH1, which can be found online for Rs. 5,990, is a great entry point into the never-ending audiophile world.

The Bullets Wireless are the first wireless earphones from OnePlus, the company which introduced the term flagship killer to the world. As we noted in our official review, the earphones are well built, have solid battery life, and sound great when used with an aptX compatible phone. The instrument separation is impressive but the highs can get a bit harsh at times.

OnePlus claims the earphones are weather resistant, but there is no IP certification to back this claim. While there are a few better sounding alternatives in the market, the OnePlus Bullets Wireless, which is priced at Rs. 3,999, is the most well-rounded of the lot.

The Sony HT-S700RF is not your average run-of-the-mill Soundbar system, as it adds two tallboy-style rear speakers to the usual soundbar plus subwoofer package. It is well built, looks classy, and does a commendable job with music as well as movies. While most home theatre systems emphasis the bass to an extent that the mids get completely lost, this soundbar gives every frequency the chance to shine. Mids are expressive, bass is tight and controlled, and the highs are crisp.

The HT-S700RF 5.1 is well priced (Rs 39,990) for what it offers and is a very well-rounded home theatre system that ticks almost all the right boxes. Audio purists might find the lack of high resolution audio codec support stifling and for them, the aforementioned Mass Fidelity Core might make for a better buy.

Just like the Fiio FH1, each earpiece of the 1More Dual Driver In-Ear has two drivers — a balanced-armature driver that handles the upper mids and highs, and a dynamic driver that reproduces the bass and lower mids. The earphones are comfortable, have a sleek design, and are built well. The bass is emphasised but the rest of the frequencies are not buried by it.

Available for less than Rs. 3,800 online, the 1More Dual Driver In Ear offers stellar value for money. These earphones are not for ardent audiophiles who will definitely be put off by the slightly repressed mids. However, most users will be hard pressed to find a better sounding and more well-rounded pair of earphones than this for less than Rs. 4,000.

As we mentioned in our official review, the Jabra Elite Active 65t ranks amongst the best pairs of truly wireless earphones we have tested to date. Not only do the earphones deliver stellar sound quality, they offer a secure and stable fit, solid battery life, excellent noise isolation, and high-quality microphones that ensure crisp voice calls.

The earphones are IP56 dust and water resistant, which along with the secure fit, makes them an ideal companion for the gym and intensive activities. Jabra has also equipped the earphones with an accelerometer, which allows for fitness and performance monitoring via the Jabra Sound+ smartphone app.

With smartphone manufacturers slowly and steadily ditching the good old 3.5mm headphone jack, the audio industry is moving towards Bluetooth headphones. However, there still exists a segment of the population who wants to use their existing high-quality headphones without having to deal with a pesky dongle. Fiio addressed this need with the BTR 1 Wireless DAC, which is a Bluetooth receiver that uses the same DAC found in Fiio's M3K high-resolution audio player.

The only limitation of the BTR1 is the lack of true high resolution audio codec support, as it only supports aptX. This has been addressed by Fiio with the new BTR 3, which supports the aptX HD and LDAC high-resolution audio codecs. The upgraded model can also be used as an external DAC, making it much more versatile, and comes with a USB Type- C port for charging and data transfer.

Which is your favourite audio product of 2018? Let us know via the comments.