Samsung and Jabra take on Apple’s dominance in the true wireless space. 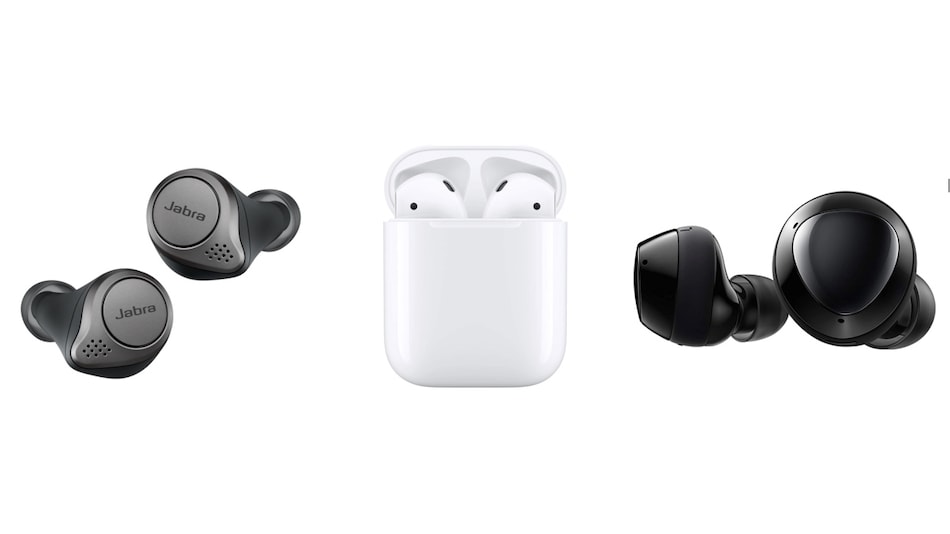 We've used true wireless earphones of all shapes, sizes, and prices, and we can confirm one thing: you get what you pay for. There are some very impressive options that sell for less than Rs. 5,000 today, but spending up to Rs. 15,000 will get you not only a huge improvement in performance, but also additional features such as wireless charging and app-based customisations. Today, we're comparing what we consider to be the three best pairs of true wireless earphones that you can buy for less than Rs. 15,000.

The Apple AirPods (2nd Gen), priced at Rs. 14,900, is the oldest of the lot, and features the same classic design as the original AirPods. The Jabra Elite 75t (Rs. 14,999) and Samsung Galaxy Buds+ (Rs. 13,990) are newer, with more modern designs and an in-canal fit. We've compared these three true wireless headsets; find out which is the best for you by reading on.

All three headsets are priced under Rs. 15,000. While the Samsung Galaxy Buds+ is the most affordable of the three at Rs. 13,990, the Apple AirPods (2nd Gen) and Jabra Elite 75t are priced at Rs. 14,900 and Rs. 14,999 respectively. It's worth noting here that you only get the regular charging case with the AirPods at this price; the option sold with a wireless charging case costs Rs. 18,900.

All three options are available both online and offline; the latter is usually a more reliable option when it comes to the products being in stock, though. Samsung usually offers the Galaxy Buds+ at a discount if bought along with select Samsung smartphones, so it might be worth picking these up if you're looking to buy a new phone as well.

Starting off with design, there are significant differences between the three options being compared here. The Apple AirPods feature an outer-ear fit similar to that of the first AirPods and Apple's wired EarPods, while the Jabra and Samsung options have a more secure and in-canal fit that also helps isolate noise. The former is more comfortable for a lot of people and allows for a decent amount of ambient awareness, while the latter creates a more focused listening experience and will also stay in place more securely if you use your earphones for physical activity such as running.

All three models feature plastic bodies The AirPods have long stems for the microphones, which the others don't seem to need. The Samsung and Apple headsets feature touch controls on their outer surfaces for most functions including playback and invoking your phone's voice assistant. The Jabra Elite 75t has physical buttons on the earphones.

Apple and Samsung's true wireless earphones are made to work best with their own smartphones, with some specific features and connectivity options designed around those devices. AirPods pair and connect the quickest with iOS devices, and you can also control Siri and see a breakdown of each unit's battery level using your Apple smartphone or tablet.

The Samsung Galaxy Buds+ are able to use the Scalable Bluetooth codec when paired with Samsung smartphones, which considerably improves sound quality. That said, both options still work well even on other devices without these features. The Jabra Elite 75t functions the same regardless of which smartphone you use. Although the aptX Bluetooth codec isn't supported, the earphones use the comparable AAC codec on both iOS and Android phones.

The Samsung and Jabra headsets have companion apps available for both Android and iOS, which let you tweak settings, adjust the equaliser, and more. Apple's settings for the AirPods are built into the iOS settings menu itself. The AirPods only support Siri when used with an iOS device, while the Samsung and Jabra headsets can invoke the default voice assistant on your smartphone regardless of what you pair them with.

Apple continues to stick to the Lightning port to charge the case of the AirPods; this is a polarising issue for many, but iPhone users won't have to carry an extra wire around. The Samsung Galaxy Buds+ and Jabra Elite 75t both stick to the universal standard USB Type-C port for charging.

Wireless charging is a standard feature on the Samsung Galaxy Buds+, but the Apple AirPods (2nd Gen) only supports this if you choose to buy it with the wireless charging case (Rs. 18,900), or if you buy the case separately (Rs. 7,500). Wireless charging is slow on both headsets, but it's a convenient feature to have nonetheless.

Comparing battery life on the three headsets, Samsung is far ahead of the competition when it comes to a single cycle on the earphones themselves. The Galaxy Buds+ ran for 11 hours per charge in our testing, compared to five hours on the AirPods (2nd Gen) and a little under seven hours on the Jabra Elite 75t.

However, the compact charging case of the Samsung Galaxy Buds+ is only able to give the earphones a single recharge for a total battery life of 22 hours, while the Apple AirPods and Jabra Elite 75t ran for multiple cycles totalling 30 hours and 27 hours respectively during our testing.

Sound quality on wireless headphones and earphones has a lot to do with the Bluetooth codec used, which of course also depends on the source device. We found that in the case of the Apple AirPods (2nd Gen) and Samsung Galaxy Buds+, performance was indeed better when using an iOS device and a Samsung smartphone respectively, than with any other Android smartphone. This is because of the superior codecs that these phones support.

The AirPods (2nd Gen) uses the AAC codec and connectivity with an iOS device to better effect, as does the Samsung Galaxy Buds+ by using the Scalable Bluetooth codec. The Jabra Elite 75t is at a slight disadvantage here, but makes up for this with good hardware and tuning for a comparable listening experience. All three headsets offer clean, detailed sound that is up to the mark for the sub-Rs. 15,000 price segment.

The Apple AirPods (2nd Gen) offer up a clean and sharp sound, with a safe sonic signature that is flexible enough to suit most popular genres. Detail and loudness were decent for us, but the design means that noise isolation fell short of what the Samsung and Jabra headsets managed to achieve.

When used with a Samsung smartphone, the Galaxy Buds+ was incredibly detailed, with a luxurious soundstage and precise imaging. Dropping to the AAC Bluetooth codec for use with non-Samsung devices, the sound retained much of its character, with only the level of detail dropping a bit. The sonic signature was well suited to popular genres, and the ability to quickly and easily tweak this effectively through the app was a big advantage.

The Jabra Elite 75t is as detailed as the others, and is also capable of restraint and poise when needed. We did experience a lot of punchiness in bass-heavy tracks, while gentler tracks felt more composed, without the bass taking centre-stage. The excellent fit and noise isolation on these earphones made for a more immersive and engaging listening experience as well.

Apart from the obvious similarities in price, the Apple AirPods (2nd Gen), Samsung Galaxy Buds+, and Jabra Elite 75t are quite similar in function and capabilities as well. We enjoyed our time with all of these true wireless earphones, with each one having its own distinct sonic signature and characteristics. What is common to all three is good performance on voice calls, and detailed sound.

Which one you choose should have a lot to do with which smartphone or source device you intend to use the earphones with. If you have an iPhone or Samsung Smartphone, the AirPods or Samsung Galaxy Buds+ respectively are your best options. Jabra is the most universally useful pick of the three.

If you like your sound calculated and composed, the AirPods (2nd Gen) is the ideal choice. If battery life is important, there's no better pick than the Samsung Galaxy Buds. If punchy bass and plenty of drive are what you seek, the Jabra Elite 75t is your best bet.