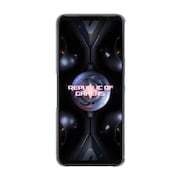 The Asus ROG Phone 5 Ultimate is a big smartphone with a big 6.78-inch display. With the Asus ROG PHone 5 Ultimate you also get ultrasonic triggers at the back. Asus has also added an additional USB Type-C port on the side to charge the phone while gaming. It has Corning Gorilla Glass Victus at the front and Gorilla Glass 3 at the back. The ROG Phone 5 Ultimate feels bulky given its size, and its 238g  You get a clip-on AeroActive cooler and a 30W charger in the box.

Asus has picked the Qualcomm Snapdragon 888 SoC and paired it with 18GB of LPDDR5 RAM and 512GB of UFS 3.1 storage. It packs a 6,000mAh battery and gets a 30W charger in the box. The ROG Phone 5 Ultimate runs Android 11 with Asus's own ROG UI on top.

The ROG Phone 5 Ultimate has a triple camera setup consisting of a 64-megapixel primary camera, a 13-megapixel ultra-wide-angle camera, and a 5-megapixel macro shooter.  For selfies, it has a 16-megapixel shooter. Photos from the cameras appear goo as is but details aren't great on zooming in. Low-light camera performance was good and the phone automatically enables long exposure shots which made Night mode redundant.