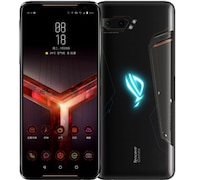 A ‘gaming' smartphone might seem like a very exciting proposition for enthusiasts, but how can a manufacturer get the average smartphone buyer to feel the same way? Asus launched the first ROG Phone (Review) last year, and while it was a good product, the high price of nearly Rs. 70,000 at the time meant that you really needed to be a die-hard gaming addict to even consider it over an iPhone, Google Pixel, or Samsung Galaxy device. That's exactly what Asus wants to change with the ROG Phone 2.

The Asus ROG Phone 2 continues to sport an industrial look, just like the first version, but it's a bit more tame this time around. The size is both bigger and heavier than its predecessor, making it one of the heaviest phones we've held in a while, measuring 9.48mm and weighing a whopping 240g. Face recognition is a lot quicker and works at odd angles too.

The 6.59-inch AMOLED display has a full-HD+ resolution but what's impressive is that it has a 120Hz refresh rate. The ROG Phone 2 also features the second version of Asus's AirTrigger system. There's a new dual vibration system present too. The phone also uses a 3D vapour chamber system for cooling.

It's powered by a special speed-binned Snapdragon 855+ SoC, LPDDR4X RAM, and UFS 3.0 storage. For the ROG Phone 2, you can choose a more vanilla Android theme during the setup process, instead of the default ROG theme.

For the ROG Phone 2, you can choose a more vanilla Android theme during the setup process, instead of the default ROG theme. Apps load quickly and multitasking is handled very well. Of course, the main draw of this phone is gaming, and this is hands-down one of the best devices — if not the best one — for that. Game Genie also lets you enable an overlay in games to keep an eye on the framerate, system temperature, and CPU and GPU usage in real-time.

Battery life is equally impressive, and not just because of the massive capacity of 6,000mAh. Even with the screen running at 120Hz and a lot of camera, gaming, and social usage, we still managed to easily go past one full day on a single charge.

The rear sensors on the ROG Phone 2 are the same as those on the Asus 6Z. Performance during the day is impressive and in low light, the app's Night mode does a very good job in brightning up the scene, although not as good as some of the more expensive flagships.