Foursquare With a Storyline: Google Brings Ingress to iOS 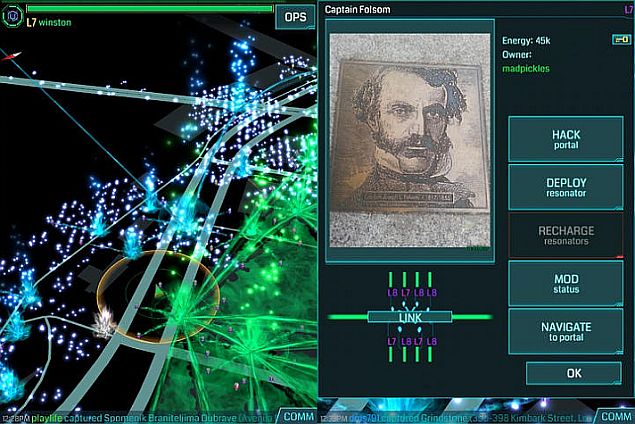 On Monday, Google brought Ingress to the App Store. This free game is based around location information - you need to capture territory by going to different real world locations and "deploying tech" that you've been collecting, to control that "portal" for one of two competing factions, the Resistance and the Enlightened.

Google launched Ingress on Android in December last year, after spending a year in beta. The game is completely free, with no in-app purchases either. We had tried it out during the beta days on Android and enjoyed the experience, so we took Ingress for a spin on iOS. The good thing is that the game is cross-platform across Android and iOS versions, so whether you're playing with an iPhone or iPad (you'll need a cellular model, since Ingress needs Internet access, and has you playing by walking around outside), you're able to connect to the existing Android community. And community is very important for Ingress.

That's because Ingress is - at its heart - a location based check-in service, like Foursquare or Facebook Places. You are placed in one of two competing factions, in a science fiction setting. By visiting different real world locations and using the gadgets you've collected, you can control locations, and you get bits of the story doled out when you do this. You can attack portals controlled by other factions, and hack them for items.

The story is a bit like a B-grade sci-fi flick, but it's just engaging enough to keep you coming back for more. You get regular emails from Ingress, written in-character, urging you to link portals together, bridging the virtual and real world.

At its core, there's not much more to Ingress. For some, this will seem like to thin a justification to walk around letting Google track your movements. You go to a location, carry out a few actions, and you're essentially done. But a lot of people have gotten quite involved with the game as well.

In India, cities like Delhi, Bangalore, Chennai, Mumbai and Hyderabad all have some degree of activity, though it's a far cry from what you read about other cities around the world.

Ingress is fairly limited, and like most games that rely on daily interactions as a part of gameplay (as opposed to daily interaction happening because you enjoyed the gameplay) it can get boring unless you are able to immerse yourself in the fiction.

The actual writing isn't exactly award winning stuff, of course, but it's surprisingly good at setting the tone. Ingress never really wants to try and rise above the B-movie stuff, but that's not necessarily a bad thing. The cheesy style lends itself to a light-hearted game, and keeps Ingress from feeling overwrought. Instead of taking itself seriously, the game invites you to have fun.

Just how much fun you'll have with a barebones experience like Ingress comes down to you, but if you're willing to make a little effort in the real world, getting from portal to portal, then you can have a lot of fun with it. And at the end of the day, the game is free and encourages people to get out of the house while gaming. So why not give it a shot?

Ingress is available for iOS and Android

Airtel Sells Majority Stake in Beetel to US-Based Brightstar
Electronic Waste Is Piling Up: How Can This Change?